On June 26, 2005, Mauricio "Shogun" Hua and Antonio Rogerio "Lil Nog" Nogueira fought for the first time. The event was Pride FC's Critical Countdown 2005, the quarter-finals of their middleweight grand prix for that year, at the Saitama Super Arena. They fought to the 20 minute time limit – Pride rules stated the first round was 10 minutes instead of the standard five – and Shogun won the decision victory.

At that point in time, the two Brazilians had only suffered one loss each, had similar records (9-1 for Shogun, 11-1 for Lil Nog) and were both renowned for their similar fighting style. They would stand upright in an open stance and swing lefts and rights at whatever was in their way until someone was on the floor. Here was the biggest difference: Shogun would leap into the air and try to damage the grounded opponent with punches, kicks and stomps, Lil Nog would grapple and fight for submissions. This goes a long way to explaining how Shogun went into the fight with no decision wins, only stoppages and Lil Nog had seven decisions.

It was an all-out war and has come to be considered a classic that both men are proud of. It's an exciting if somewhat sloppy brawl by today's standards but then, in 2005, it was two of the world's best middleweights demonstrating their skills in every facet of MMA. Even though he didn't win, Lil Nog could be proud of being the first person to take Shogun to the limit. A decade later at UFC 190 on August 1, 2015 in Rio de Janiero, Brazil, the two men had their long awaited rematch. A lot had changed since Critical Countdown 2005, and not for the better. Shogun, a beast in Pride FC, had struggled since his move to the UFC. The Unified Rules of MMA banned a lot of his ground work and the lack of hard corners in the UFC cage compared to the Pride FC ring meant he couldn't back people up like he was used to, meaning his trademark looking punches were easy to evade.

As for Lil Nog, he had tried his hand in a few smaller MMA promotions (Affliction, World Victory Road, Jungle Fight) before coming to the UFC where, at 39 he was something of a has-been. Without any title or grand prix wins, he was thought of as a granite tough fan favorite and wasted potential. 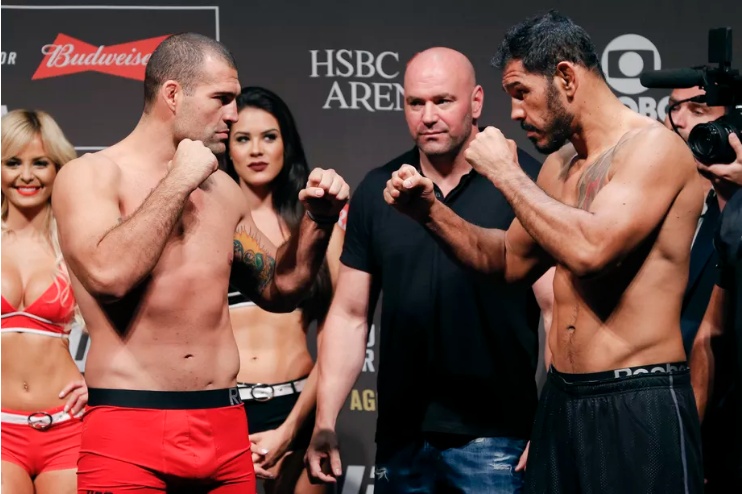 Mauricio "Shogun" Rua faces off with Antonio Rogerio "Lil Nog" Nogueira before their light heavyeweight bout at UFC 190 at the HSBC Arena in Rio de Janeiro, Brazil on August 1, 2015.

And yet, when the cage door closed and Bruce Buffer had done his introductions, Shogun and Lil Nog, now light heavyweights instead of middleweight, lit each other up like they were still in Japan. The spirit of Pride FC was alive and well as the two men tore each other apart for 15 minutes. With a combined 35 more fights between them and a knowledge of how much damage they could do to each other since their first bout, the pace of the second fight was slower if no less intense.

Punches were thrown with intent and both men were stung badly in the first round alone; the final minute looked more like a game of Rock 'em Sock 'em Robots than an MMA fight. There was plenty more action in Rounds 2 and 3 also, but it was tempered by takedowns from Shogun and jiu-jitsu from Lil Nog. Now in their 30s, neither man seemed so excited to get involved in a melee. That doesn't mean this fight was bad, simply that the competitors had evolved to become more defensive rather than strictly hell for leather types.

Again, Shogun won a close decision and, again, the match has gone on to be regarded as a classic. And so, when Shogun and Lil Nog complete their trilogy this upcoming Sunday at UFC Fight Night 174 at Fight Island, Abu Dhabi, UAE, there is a lot to live up to. 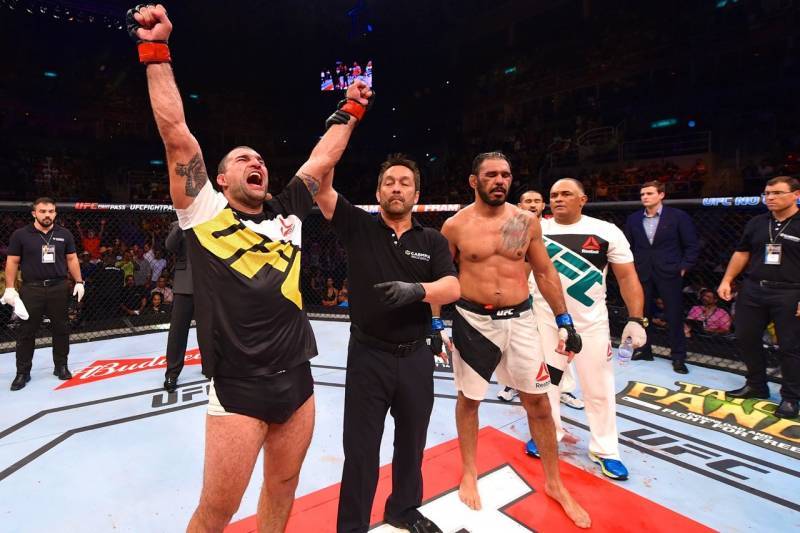 There is a bad precedent for this type of fight. On November 24, 2018, Chuck Liddell faced Tito Ortiz for the third and definitely final time for Oscar de la Hoya's Golden Boy Promotions. Once a genuine great of the sport, Liddell fought exactly like a 48-year-old who had been retired for almost a decade and was famous for having drug problems. When he was knocked out in Round 1 by Ortiz, his longtime and very bitter rival, it was just depressing rather than in any way conclusive.

Thankfully, in this case, Lil Nog has confirmed this will be his last active fight, having slowed to a pace of one per year. Even though Shogun is already 2-0 ahead in this series, Lil Nog considers him his greatest opponent and would like to retire against him. Likewise, Shogun, has been incredibly respectful in the buildup. Talking at the virtual media day before the event, Shogun said "I fought Nogueira at the start of my career, the middle and final [stage]. I am happy because Rogerio is a legend of the sport, and I know this fight motivates him."

With nothing but legacy on the line, this final encounter between two MMA veterans should be something special for long time fans, even if it doesn't match the highs of their previous encounters.