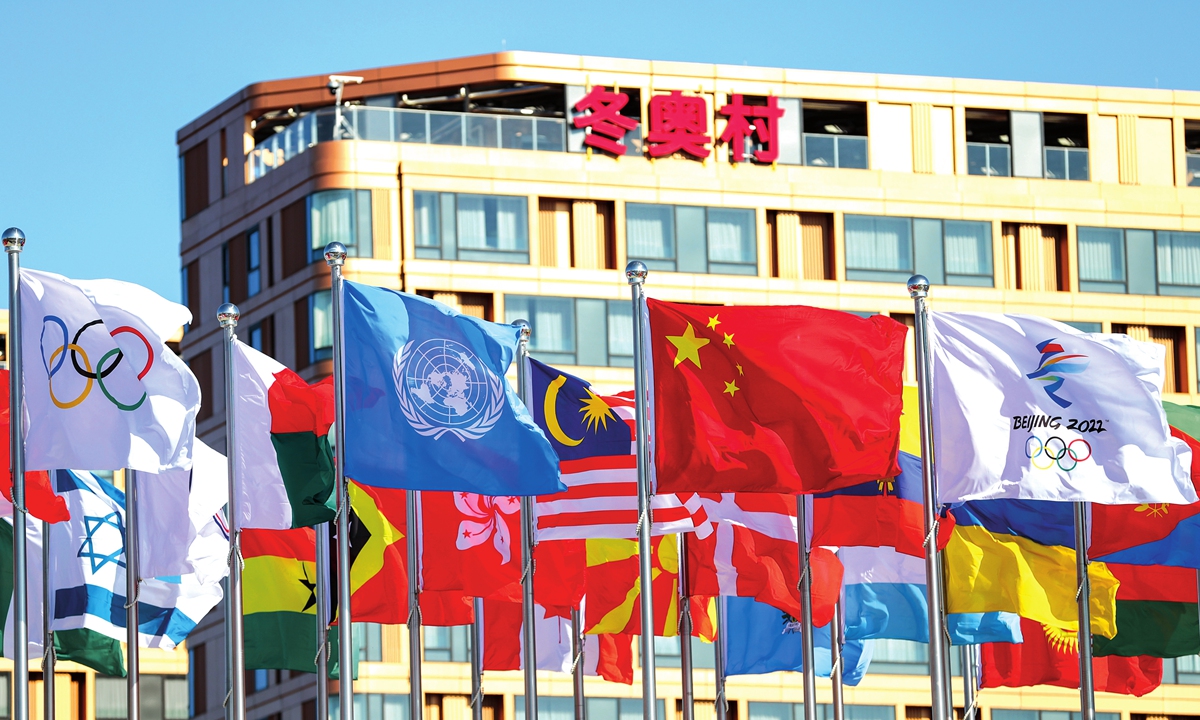 World athletes are arriving in Beijing, as the world shares the cheerful atmosphere of the great union of Beijing 2022 Winter Olympics, which kindles hope for the world which has been struggling with the pandemic and needs solidarity more than ever. On Friday when the UN resolution to observe the Olympic Truce for the upcoming Winter Olympics took effect, the risks of regional conflict on the Russia-Ukraine border linger.

The escalating tensions between the US-led West and Russia reminded observers of the Russia-Georgia 2008 war, as the South Ossetia conflict on the heels of the Beijing 2008 Games compromised the "no war, only peace" principle of the event.

To prevent a similar scenario recurring during the Beijing 2022, experts welcomed the upcoming discussion at the UN Security Council on Monday while the US and Russia keep the door open on diplomacy despite that no breakthroughs have been made so far after multiple rounds of talks.

Russia said on Thursday it was clear the US was not willing to address its main security concerns in their standoff over Ukraine, but both sides kept the door open for further dialogue, according to Reuters. The comments were made after the US and NATO submitted written responses on Wednesday to Russia's demands for a redrawing of security arrangements in Europe, the report said.

Meanwhile, the US has requested that the UN Security Council meet publicly on Monday to discuss the current situation which could pose a threat to international peace and security.

"As the Winter Olympics is around the corner, no one wants to see major conflicts occur during this period, considering the Olympic Spirit. But after rounds of negotiations between Russia and the US, the NATO and OSCE, there are no concrete movements," Yang Jin, an associate research fellow at the Institute of Russian, Eastern European and Central Asian Studies at the Chinese Academy of Social Sciences, told the Global Times on Friday.

If there's no effective risk control mechanism put in place, it will be hard to predict how the situation will evolve, which reminds us of the Russia-Georgia conflicts during the Beijing 2008, Yang noted. "Now it's necessary to take active measures to prevent similar scenarios," he said.

The UN General Assembly adopted the resolution last December for the observance of the Olympic Truce for the Olympic and Paralympic Games Beijing 2022, from January 28 to March 20, 2022. China's Permanent Representative to the UN Zhang Jun said in a tweet that "let's take this opportunity to promote peace, solidarity, cooperation and other common values shared by all humanity."

While the US on Thursday called on China to use its influence to urge a diplomatic solution to the Ukraine crisis, according to Reuters, Chinese experts said China's stance on the issue has been clear as it was laid out in the latest phone call between Chinese State Councilor Wang Yi and US Secretary of State Antony Blinken, which is to promote diplomatic dialogue to play the role of coordination in multilateral mechanism.

The new Minsk agreement, endorsed by the UN Security Council, is a basic political document recognized by all parties and should be implemented earnestly. China will support any effort that conforms to the direction and spirit of this agreement, Wang told Blinken.

"In fact, the call for upholding the agreement shows that China hopes the relevant parties to assume necessary responsibilities, for example, the NATO also needs to take its responsibilities and not offend Russia's security strategy by providing advanced weapons to Ukraine," Yang said, noting that the West should remain constraint by avoiding any further provocation against Russia.

However, when it comes to some reports that said the US called on China to "use its influence with Russia" to urge a diplomatic solution over the Ukraine tensions considering the strategically warmed up ties between Russia and China, some Chinese experts said although such call reflected the growing influence of China on global and regional issues, it's unrealistic to rely on China to be a mediator, given that the essence of the current tensions is a geopolitical crisis of Europe.

Experts also said some Western media have been hyping the "escalating tensions" in the Ukraine situation, amplifying the role of China and instigating China-Russia relations with fake news.

Some observers said Washington is trying to create such an image in public opinion that the US has been making efforts to ease the tensions, and shift the blame to Russia and China. However, the essence of the

Ukraine crisis stems from the unrestricted expansion of NATO fueled by the US. However, the US hopes China persuades Russia compromise confuses the cause and effect.
Yang Xiyu, a senior research fellow at the China Institute of International Studies in Beijing, told the Global Times that the US' purpose of urging China to use "influence" was to urge China to persuade Russia to back down over the Ukraine issue, which China simply cannot do, as the US' solution on Ukraine was infeasible.

The new Minsk Agreement is a basic political document recognized by all parties and should be implemented effectively, Zhao Lijian, spokesperson of the Chinese Foreign Ministry, told a routine press conference on Friday.

"China will support all efforts that conform to the direction and spirit of the agreement. At the same time, we also call on all parties to remain calm and refrain from further stimulating the tensions and hyping up the crisis," he said.

Ahead of the Winter Olympics, Chinese authorities vowed to prepare for any emergencies and further prevent the threat of terrorism from emerging or impacting the Games.

The Beijing Winter Olympics is held amid multiple and complicated big-power politics and many contingencies may occur during the Games, mostly stirred up by the US, Lü Xiang, a research fellow at the Chinese Academy of Social Sciences, told the Global Times on Friday.

On external risks, Lü said the US may use geopolitical conflict to dilute Olympic unity and fan the flames of a potential Russia-Ukraine conflict. Similarly, the US may also make trouble in the South China Sea and the Taiwan Straits, and even ally with partners such as Japan to display military power, he said.

"The US has a team that focuses on hyping Xinjiang-related issue. It may repeat its old tricks of inviting some so-called victims of human rights to smear China's human rights. On South China Sea, it may deploy some military aircrafts for reconnaissance missions," Lü said.

As for the Games itself, the US has spared no efforts to attack China's COVID-19 policy and closed loop management system, some experts said.