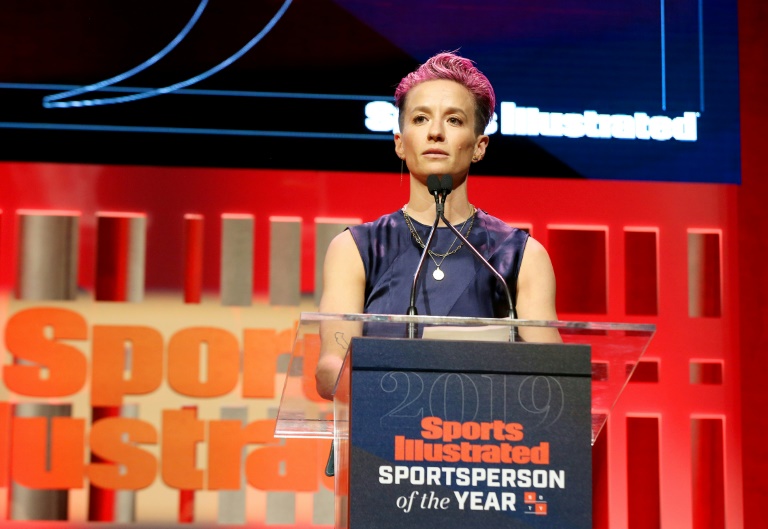 US football star Megan Rapinoe, here receiving Sports Illustrated's Sportsperson of the Year Award for 2019, vowed athletes won't be silenced after the IOC warned against politica protests at the 2020 Tokyo Olympics. (Photo: AFP)

United States World Cup icon Megan Rapinoe Friday vowed that athletes "will not be silenced" after the International Olympic Committee warned against political protests at the Tokyo Games.

"We will not be silenced."

Rapinoe's comments were accompanied by a graphic showing fists raised through the interlocking rings -- under the crossed out words "kneeling, hand gestures, signs."

The post comes after IOC chief Thomas Bach reiterated that athletes, coaches, trainers and officials are banned from political protests on the field of play, at the Olympic Village, during the opening and closing ceremonies and on the medal podium.

"If this political neutrality is not respected, then the Olympic Games will divide, and not unite, the world," Bach insisted.

The guidelines issued Thursday by the IOC on specific actions that are banned and will draw sanctions, come after two US athletes were reprimanded by the US Olympic Committee for medal podium protests at the Pan American Games in Lima.

Rapinoe has been outspoken on political issues during her career, speaking out about issues including gender equality and racism.

In 2016 she joined former San Francisco 49ers quarterback Colin Kaepernick in kneeling during the national anthem to protest racial inequality in America.