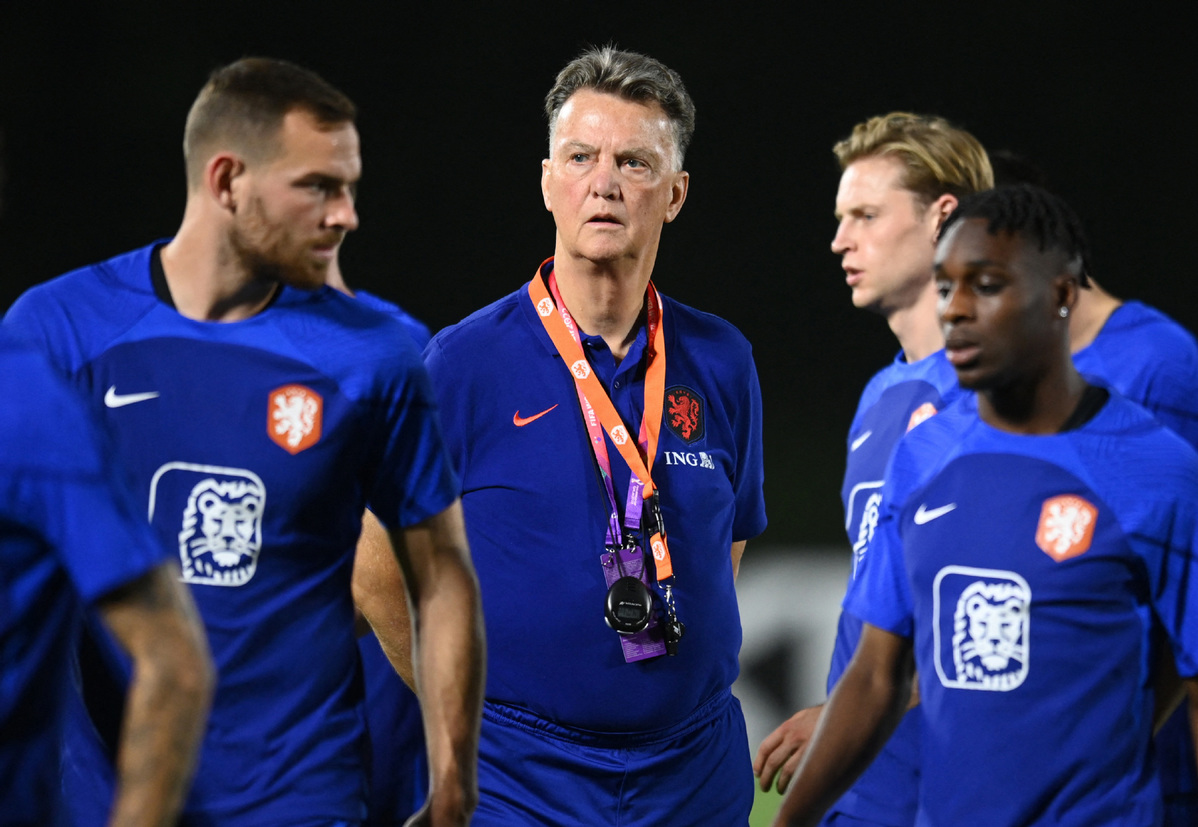 DOHA, Qatar — Three wins from the title that has eluded the Netherlands, Louis van Gaal has filled his World Cup with hugs, kisses and dancing.

Leading his nation for the third time at age 71, he is the tournament's oldest coach. He also may be the most dapper, pacing the sideline in a neon orange tie, dark business suit and dress shoes.

Van Gaal has the Dutch on a 19-game unbeaten streak going into Friday's quarterfinal against Lionel Messi and Argentina. Known as the Iron Tulip, he has entertained off the field as much as his players have on the pitch.

Van Gaal responded to praise from a Senegalese reporter 25 minutes into a news conference with an excited: "Oh, I can hug you. I'll give you a big, fat hug later," according to his translator.

And after the news conference, LVG did just that, beckoning for Papa Mahmoud Gueye to meet him at the side of stage, then wrapping his arms around the 28-year-old and giving him eight pats on the back followed by a tap on the face.

A few days later, Van Gaal puckered up. He was seated next to Denzel Dumfries, who scored one goal and assisted on two others in the 3-1 win over the United States that put the Dutch in the quarterfinals. A reporter from Aruba asked Van Gaal how proud he was of the defender, who has an Aruban father.

"Yesterday or a day before yesterday, I gave him a big fat kiss. I am going to give him another big fat kiss so everybody can see," the coach said. He leaned over, put an arm around the player and placed a smack near Dumfries' right ear.

A short while later, Van Gaal followed his players on a jubilant dance line while arriving at the St. Regis Doha. Quite different from his demeanor after the 2-0 win over host Qatar, when a Dutch reporter told him the result wasn't enough.

"Of course, you can give your opinion. I don't agree with you and I'm not going to expand on that because I think that you have a different perspective on football than I have," Van Gaal said. "So why don't you write that down, that you think it is terribly boring, that you're going home tomorrow because you couldn't care less?" Ahead of the US match, he described criticism as a constant.

"If I have to believe the Dutch media, we'll never become world champion," Van Gaal said. "In 2014, it was exactly the same. Extremely negative. Now it's the same all over again. I am used to it, and I think my players are used to it, so we will calmly move on." Then he added playfully in English: "Maybe you can take now a picture after this declaration." He smiled and said: "Cheese." Van Gaal has coached Ajax, Barcelona, AZ Alkmaar, Bayern Munich and Manchester United, winning seven league titles, but he is seeking his first national team championship.

Mindset is as essential as tactics.

"He gives us a lot of confidence, a lot of clarity. Everybody knows what he needs to do," Dumfries said. "He keeps us on our toes and he frankly tells us what needs to be improved." Sitting next to the player, Van Gaal quickly interjected with a wide smile: "It's not for nothing that we brought Denzel along."

Van Gaal took over the Oranje for the first time in 2000 and quit two years later after they failed to qualify for the 2002 World Cup. He returned in 2012 and coached them at the 2014 World Cup, where Argentina beat the Netherlands on penalty kicks in the semifinals. The Dutch took third with a 3-0 victory over host Brazil, and then he quit for the second time.

Hired in August 2021 to replace Frank de Boer, Van Gaal made the controversial call to give 28-year-old goalkeeper Andries Noppert his national team debut in the team's World Cup opener against Senegal.

"For me what makes it special when you are a good manager or a good coach is that also the players who don't play, you can get a good feeling and to keep fighting for a place in that squad," Noppert said. "It's not easy to not play games and to keep the 100% focus." The Netherlands has the distinction of playing in the most World Cup finals without winning, a wound in the psyche of the Dutch fan base.