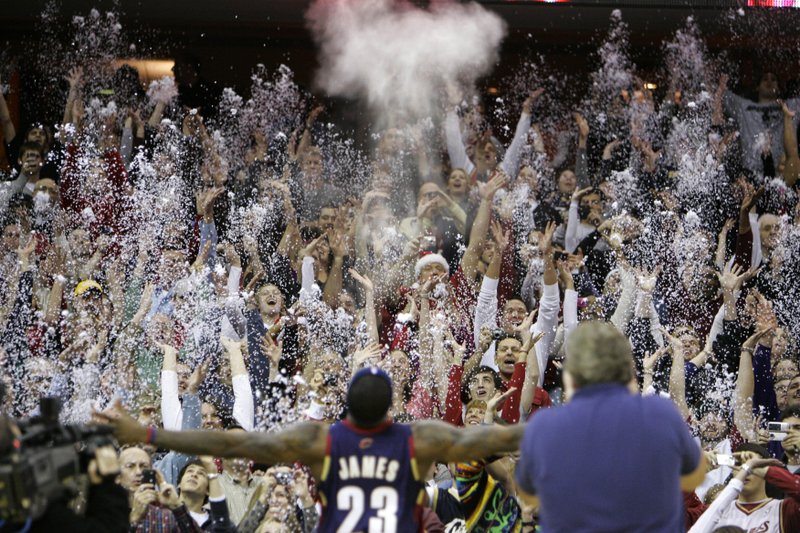 In this December 25, 2008, file photo, fans toss confetti to mimic Cleveland Cavaliers' LeBron James's pre-game chalk toss before an NBA basketball game against the Washington Wizards in Cleveland. Billions has been spent on state-of-the-art sports facilities over the last quarter-century, but there is no way to prevent the potential spread of a virus through coughing or sneezing. Officials are working on safety protocols and looking at new technology in hopes of making stadiums and arenas as safe as they can. (Photo: AP)

The jersey-wearing camaraderie. The scent of sizzling sausages. The buzz before a big game.

The distinctive atmosphere of live sports, that feeling in the air, will return in time as pandemic restrictions are eased. But will that very air be safe in a closed arena with other fans in attendance?

The billions of dollars spent on state-of-the-art sports facilities over the last quarter-century have made high-efficiency air filtration systems more common, thanks in part to the pursuit of green and healthy building certifications. Upgrades will likely increase in the post-coronavirus era, too.

The problem is that even the cleanest of air can’t keep this particular virus from spreading; if someone coughs or sneezes, those droplets are in the air. That means outdoor ballparks have high contaminant potential, too.

“Most of the real risk is going to be short-distance transmission, people sitting within two, three or four seats of each other,” said Ryan Demmer, an epidemiologist at the University of Minnesota’s School of Public Health. “It’s not really about the virus spreading up, getting into the ventilation system and then getting blown out to the entire stadium because this virus doesn’t seem to transmit that way. It doesn’t aerosolize that well.”

The three hours spent in proximity to thousands of others is part of the fan experience. It’s also why major sports leagues have been discussing plans to reopen in empty venues, for now. High-touch areas with the potential to spread the virus — called fomite transmission — are plentiful at the ballgame, of course. Door handles. Stair rails. Restroom fixtures. Concession stands.

Hand washing by now has become a societal norm, but disinfectant arsenals need to be brought up to speed, too.

“I can’t really find good hand sanitizer easily in stores. So think about trying to scale that up, so everybody who comes into U.S. Bank Stadium gets a little bottle of Purel. Things like that can be modestly helpful,” Demmer said.

There is much work to be done. Vigilant sanitizing of the frequent-touch surfaces will be a must. Ramped-up rapid testing capability during pre-entry screening could become common for fans. Minimizing concourse and entry bottlenecks, and maintaining space between non-familial attendees, could be mandatory. Mask-wearing requirements? Maybe.

Most experts, including those at the Center for Disease Control and Prevention, believe the primary mode of transmission for COVID-19 is close person-to-person contact through breathing, coughing or sneezing but there’s no consensus on some of the details.

“There’s still widespread disagreement between experts on which mode of transmission dominates for influenza. So the likelihood of us figuring this out soon for this virus is low,” said Joe Allen, director of the Healthy Buildings Program and an assistant professor at Harvard’s School of Public Health. “We may never figure it out, but I also think it’s irrelevant because it’s a pandemic and we should be guarding against all of them.”

Including, of course, the air.

The American Society of Heating, Refrigeration and Air Conditioning Engineers designed the Minimum Efficiency Reporting Value (MERV) scale to measure a filtration system’s effectiveness (from 1-16) at capturing microscopic airborne particles that can make people sick. Not just viruses, but dust, pollen, mold and bacteria. Most experts recommend a MERV rating of 13 or higher, the minimum standard for Leadership in Energy and Environmental Design (LEED) certification.

An emerging technology in this area is called bipolar ionization. Connecticut-based AtmosAir has a bipolar ionization air treatment system in about 40 sports venues. Staples Center in Los Angeles was one of the first major sports customers. TD Garden in Boston and Bridgestone Arena in Nashville are among the others who’ve signed on.

The Minnesota Sports Facilities Authority approved last year a 10-year contract for a little more than $1 million with AtmosAir to install its system in U.S. Bank Stadium, home of the Vikings and the first indoor NFL stadium to use it. The building, which measures 1.8 million square feet, has 53 air handling units with AtmosAir tubes installed, including 30 in the seating bowl.

The ions act like fresh air, reducing the amount of outside air needed to be introduced for the cleansing process. The protein spikes in the coronavirus particles make them easier to catch and kill, said Philip Tierno, a New York University School of Medicine professor of microbiology and pathology.

Said AtmosAir founder and CEO Steve Levine: “We’re never going to create a mountaintop, but we’re going to put in maybe three to four times the ions over the ambient air and then let those ions attack different pollutants in the air. The ions grab onto particles and spores and make them bigger and heavier, so they’re much easier to filter out of the air.”

The next time fans do pass through the turnstiles, in a few weeks or a few months, in most cases they will probably encounter an unprecedented level of cleanliness.

“There will be some controls that are visible, extra cleaning and disinfection, but some of it will be invisible, like for what’s happening in the air handling system,” said Allen, the Harvard professor. “The consumers will decide when they feel comfortable going back, and that’s going to depend on what strategies are put in place in these venues and stadiums and arenas and, most importantly, how well these organizations communicate that to the paying public.”