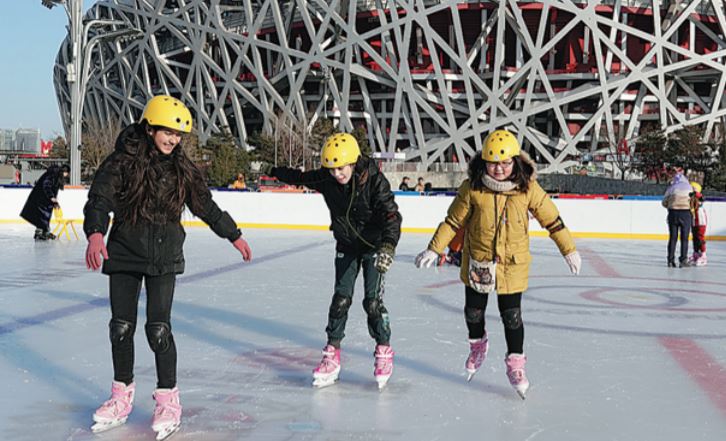 Youngsters enjoy the fun of skating during the Ice and Snow Festival outside the National Stadium in Beijing on Dec 26, 2019. (Photo: CHINA DAILY)

Meteorologists have improved their ability to provide weather forecasts for the 2022 Beijing Winter Olympics thanks to exacting preparation and a new weather forecasting system developed for the Games.

Their progress will be gauged next month when a leg of the Alpine Skiing World Cup - the first test event for the Games - is scheduled to be held in Yanqing, Beijing.

Yang Yang, a senior official with the Beijing Organizing Committee for the 2022 Olympic and Paralympic Winter Games, said the test event, scheduled for Feb 15 and 16, will be the first of 20 held in China that aim to find out if Beijing is capable of organizing such a large winter sports event.

Weather reporting is one aspect that will be examined, as the Games' schedule depends on accurate weather forecasts.

"Most winter events take place outdoors. If the wind speed exceeds 17 meters per second or the temperature drops below -25 C, outdoor events will have to be delayed or canceled to avoid harm to athletes," he said.

At the Pyeongchang Winter Olympics in South Korea in 2018, the schedule was changed more than 20 times due to the weather, he said, adding that it was very demanding work for meteorologists.

Weather in a mountain area is more complicated than in a city. The vertical distance from the beginning to the end of the main Alpine ski run on Haituo Mountain, Yanqing, is about 800 meters and the weather varies at different spots at different times, Yang said.

To better serve the Games, monitoring systems have been installed to provide minute-by-minute weather updates.

In November, Beijing's meteorological service developed a new device specifically for the 2022 Winter Games that has already been used in Yanqing.

It can target areas as small as one hectare for forecasting, whereas previous devices could only target areas of 9 square kilometers.

"Our sports team has been working closely with the weather team in Yanqing and found that the forecasters are professional and willing to endure hardship," Yang said.

Lacking experience in forecasting for winter sports, the weather team started from scratch.

Shi Shaoying, the leader of the weather forecasting team in Yanqing, said 11 forecasters were transferred from different meteorological services in 2018 and trained to use new devices and, more importantly, learn about the mountain's weather patterns.

Forecasters needed to collect more data and analyze them based on personal experience and theories to make accurate predictions, Shi said.

"It is challenging due to a lack of experience and historical data for the mountain," she said.

Zhao Fei, a forecaster from the Inner Mongolia autonomous region's meteorological service who joined the team last year, said making forecasts for a mountain was something he'd never tried before and he often made mistakes at first.

"Weather on a mountain is very complex," Zhao said.

"Temperatures and wind speeds on the mountain top are totally different from those at the foot. When I first arrived here, I didn't know much about that and made several wrong forecasts, which made me very upset."

Zhao and his teammates, also new to such forecasting, tried to understand the mountain's weather by staying on it day and night.

"The ski track was made of icy snow and slippery. We went up on cable cars and went down wearing crampons," he said.

"We took photos of clouds and experienced winds at every major spot to help us get more experience. Now I make more accurate forecasts and have more confidence. I know more about the weather patterns and characteristics of this place. I believe we are increasingly prepared for the 2022 Winter Games."