SPORTS What will big-name quarterbacks do during the offseason?

What will big-name quarterbacks do during the offseason? 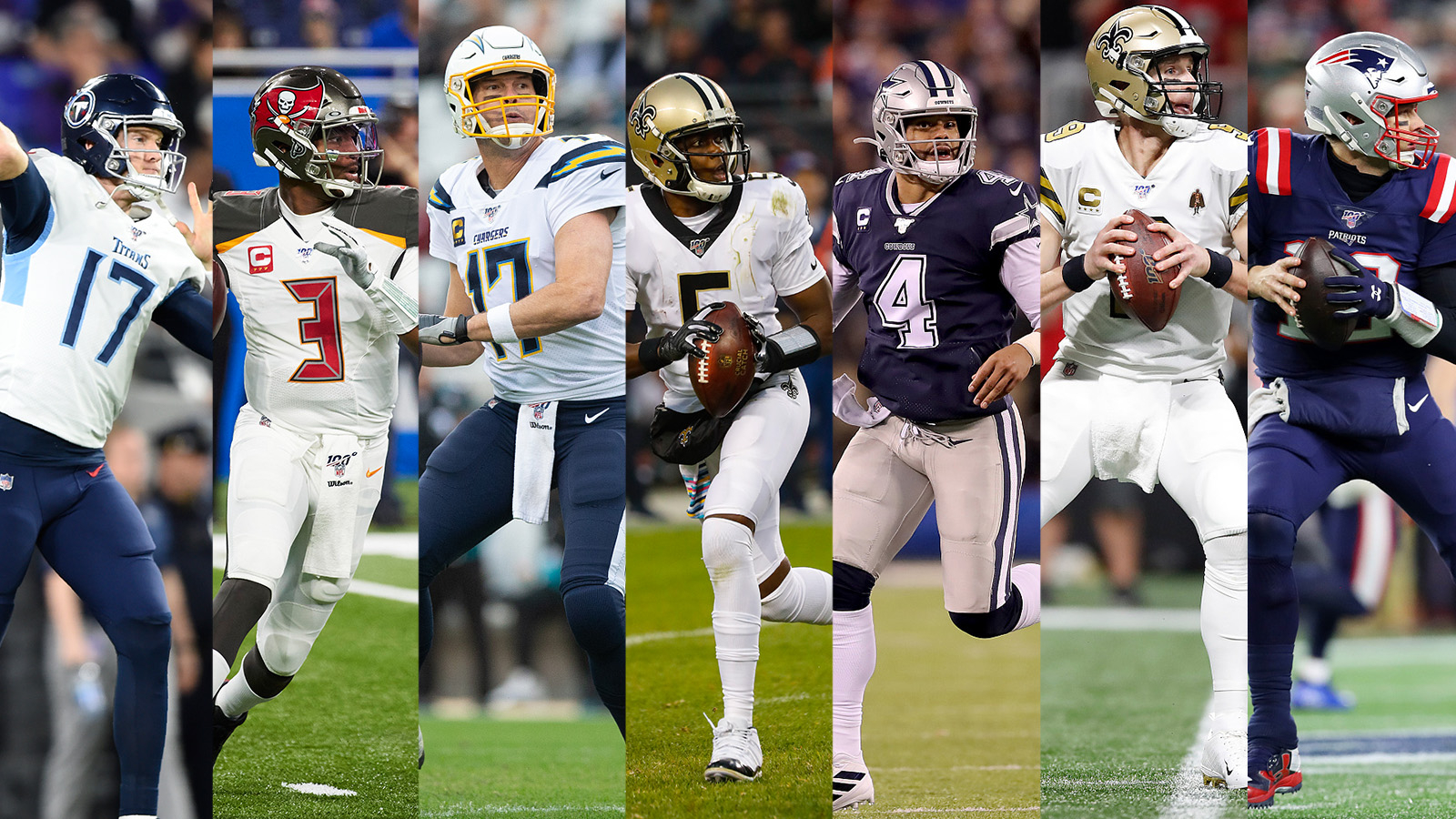 The 2020 NFL regular season is scheduled to begin on September 10, leaving the teams over half a year to maintain, improve or rebuild their squads. The following quarterbacks will become free agents in the offseason. What does their future look like? 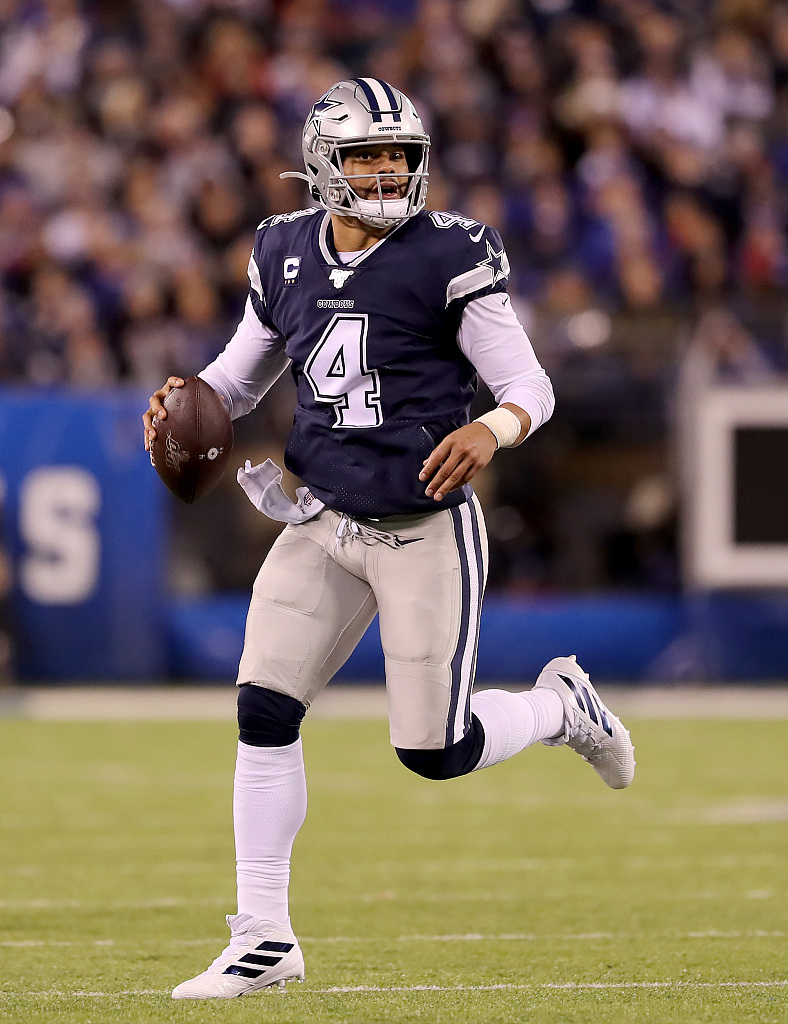 Quarterback Dak Prescott of the Dallas Cowboys runs with the ball in the game against the New York Giants at at MetLife Stadium in East Rutherford, New Jersey, November 4, 2019. (VCG Photo)

Prescott wanted a new deal that will pay him 40 million U.S. dollars annually. The Cowboys surely do not want to let him go, especially after the 26-year-old passed 4,902 yards (the second-highest in the league) and 30 touchdowns (the fourth-most) in the 2019 season. The Cowboys are expected to place a franchise tag on Prescott but that alone won't be the best option. 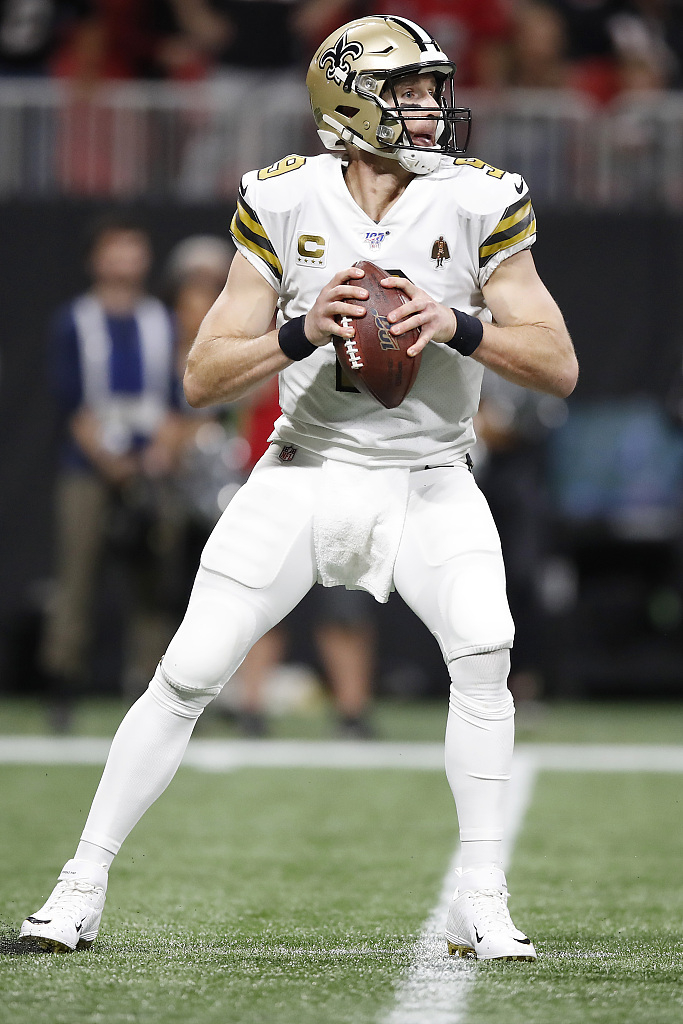 Quarterback Drew Brees of the New Orleans Saints seeks to throw the ball in the game against the Atlanta Falcons at Mercedes-Benz Stadium in Atlanta, Georgia, November 28, 2019. (VCG Photo)

Though he missed five games because of a finger injury, Brees made a fantastic comeback. He had 520 in TDs, the second-most in the NFL history, only after Peyton Manning's 539. He came second in passing attempts of 9,783, 387 away from surpassing Brett Favre and his 10,169 attempts. Currently, 41-year-old Brees is still in good shape and in need of a new contract. 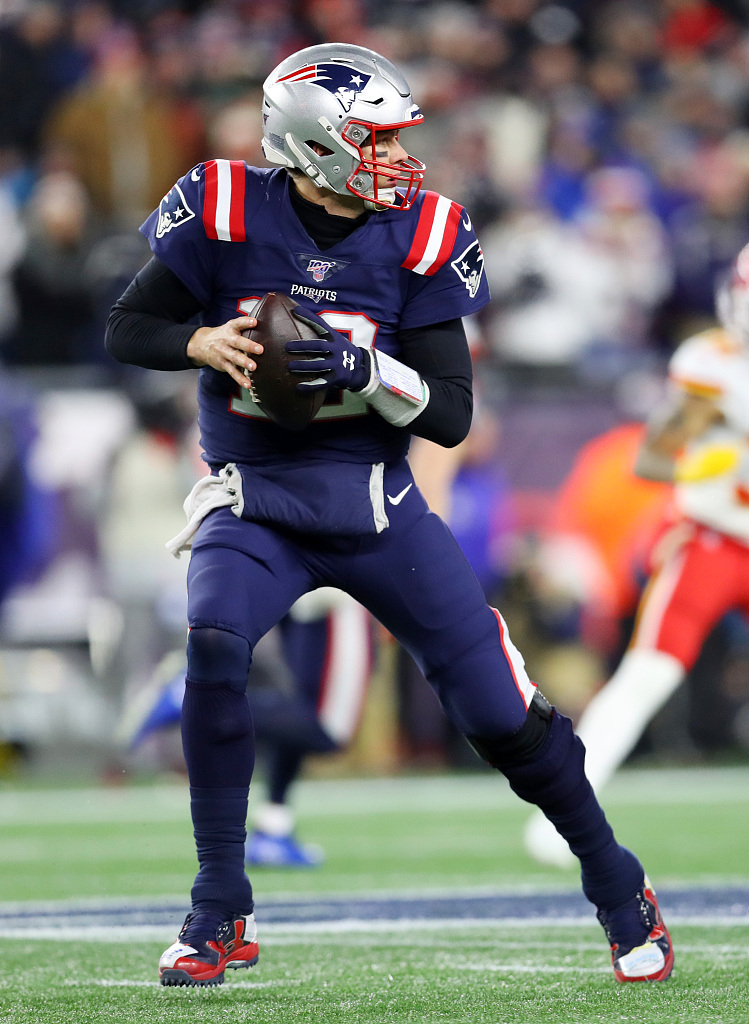 Quarterback Tom Brady of the New England Patriots runs with the ball in the game against the Kansas City Chiefs at Gillette Stadium in Foxborough, Massachusetts, December 8, 2019. (VCG Photo)

The greatest QB in the NFL history is still after his seventh ring. Will he continue to play? Definitely yes. Will he stay in the Patriots? Hard to say. Both Brady and the Patriots are growing old enough to see their performance slip in the last season. The Patriots' poor offense already became their biggest problem but even with Brady's cheap salary, the team won't have enough space to make a complete improvement on their squad. 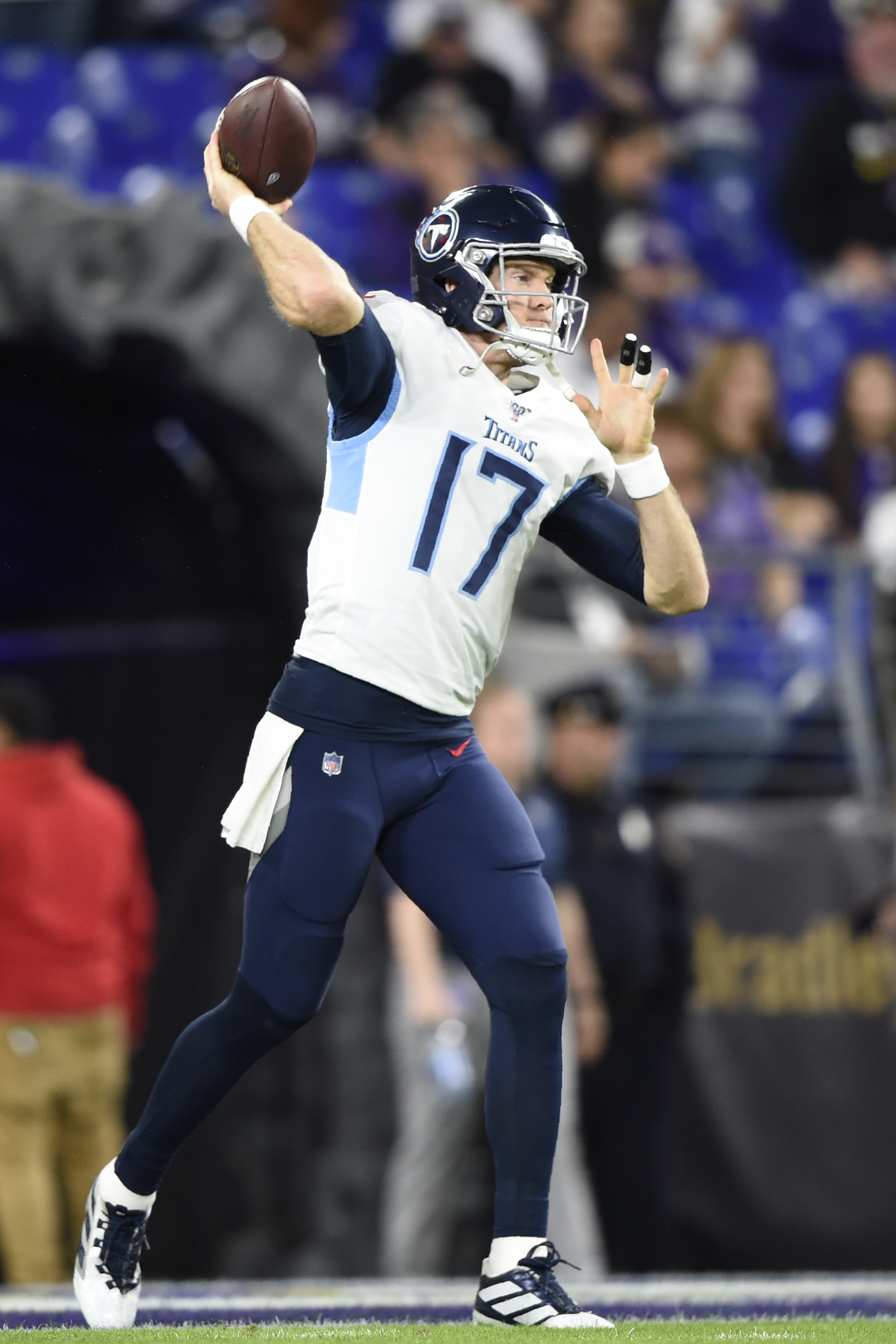 Quarterback Ryan Tannehill of the Tennessee Titans throws the ball in the game against the Baltimore Ravens at M&T Bank Stadium in Baltimore, Maryland, January 11, 2020. (AP Photo)

As the biggest playoff surprise last season, the Titans owed much of the credit to Tannehill who was named 2019 Comeback Player of Year. His passer rating (NFL-best 117.5), completion percentage (70.3), yards per attempt (NFL-high 9.6) and touchdowns (22) are all telling that 32-year-old Tannehill who led the Titans into the NFC Championship Game, deserves a sincere offer. 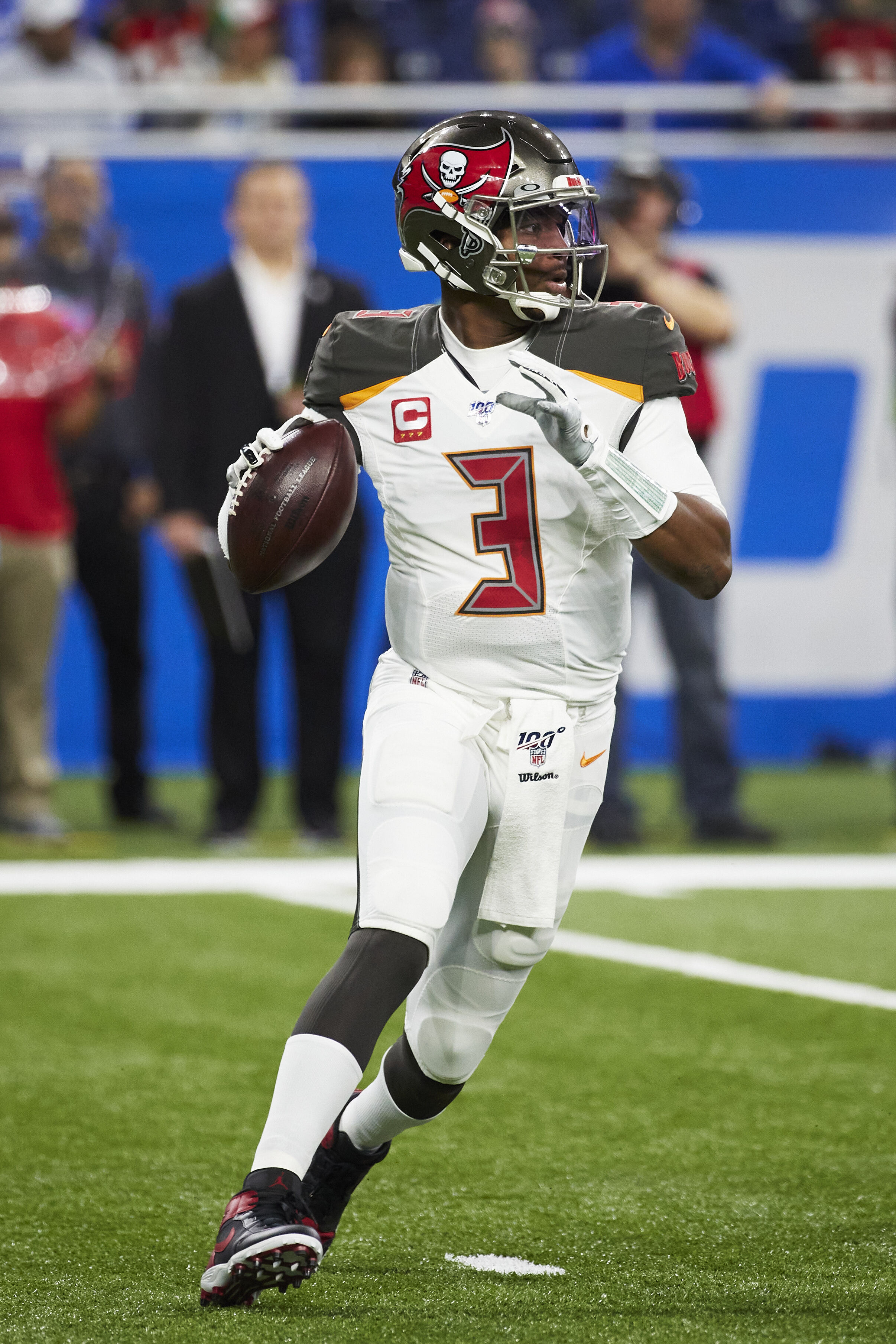 Quarterback Jameis Winston of the Tampa Bay Buccaneers runs with the ball in the game against the Detroit Lions at Ford Field in Detroit, Michigan, December 15, 2019. (AP Photo)

Winston is putting the Buccaneers in a dilemma. On one hand, the 26-year-old passed 5,109 yards last season, the most of the league. On the other hand, he allowed an NFL-worst 30 interceptions. When he is in good form, Winston is totally unstoppable; but when he is in the slump, the opponents are more than happy to see him step onto the field. Whatever the Buccaneers' decision is, there is a good chance that they may regret it. 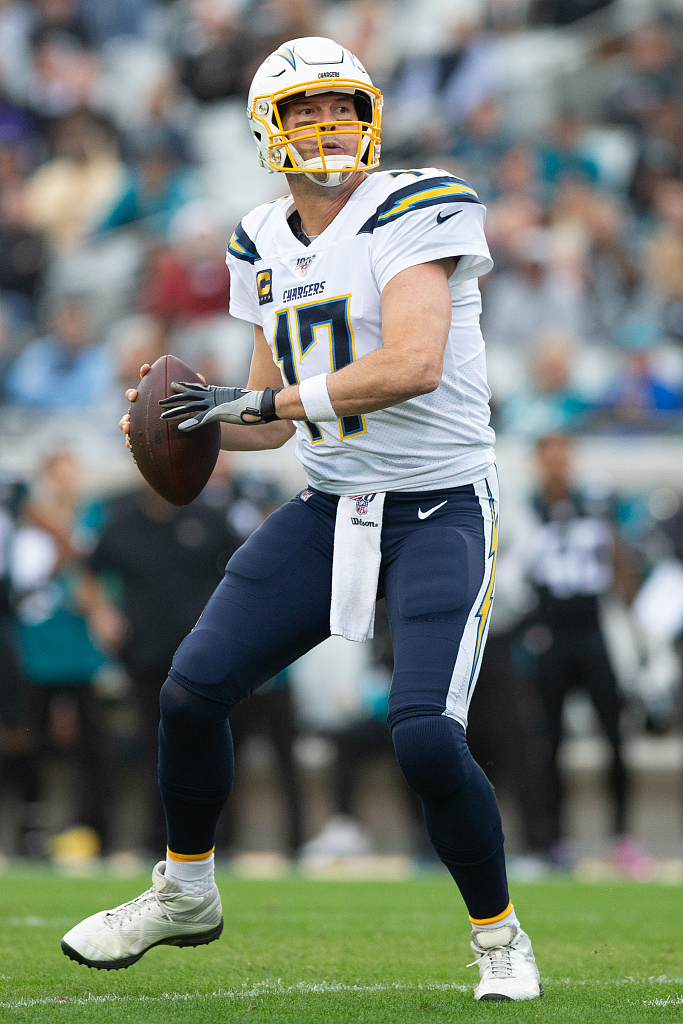 Quarterback Philip Rivers of the Los Angeles Chargers seeks teammate to throw the ball in the game against the Jacksonville Jaguars at TIAA Bank Field in Jacksonville, Florida, December 8, 2019. (VCG Photo)

Rivers' incredible performance in the 2018 season made the Chargers believe that there's still a lot gas in his tank, and then he failed the team with nine fewer TDs and eight more interceptions. His inconsistence may remind you of Winston, but don't forget Rivers is 12 years older so the Chargers may not afford to bet their faith on him again.

Quarterback Teddy Bridgewater of the New Orleans Saints runs with the ball in the game against the Chicago Bears at Soldier Field in Chicago, Illinois, October 20, 2019. (AP Photo)

In the five games where he replaced injured Brees, Bridgewater passed a total of 1,205 yards and nine TDs while allowing only two interceptions. He should be able to help the Saints win some games in a secure enough pocket. However, if Bridgewater is after a starting role, he won't find it in New Orleans.