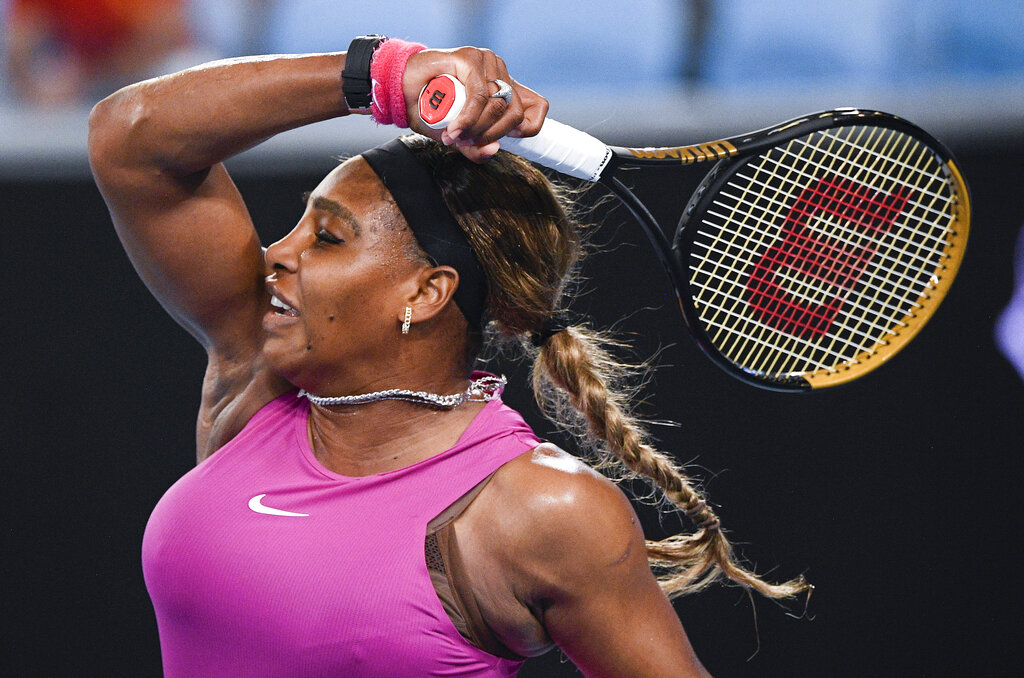 The 23-time Grand Slam champion usually doesn't play in a tournament in the week before a Grand Slam event, but made an exception before the U.S. Open last year and for this Australian Open because of all the disruptions caused by the COVID-19 pandemic.

The 39-year-old American was playing her first tournament since withdrawing from the French Open before her second-round match because of an Achilles tendon injury last October. She, like all players traveling into Australia for the tournament, had to quarantine for 14 days and had limited practice during that time.

With the year's first major starting Monday, Williams may be better resting.

She had three wins at the Yarra Valley Classic — one of six tournaments at Melbourne Park this week — culminating with a 6-2, 4-6, 10-6 win in a match tiebreaker over fellow American Danielle Collins on Friday.

Barty will also get a rest Saturday after getting a walkover into the final, which has been pushed back by a day.

There were 70 matches on the order of play Friday, an expanded program a day after all matches in six tournaments were postponed so that 160 players and 507 people overall could isolate and undergo testing because a worker at a quarantine hotel returned a positive test. Tennis Australia said all tests were negative.

To speed things up a little at the back end of the tournament, 17 courts were being used and women’s matches were reduced to two regular sets with a 10-point match tiebreaker if required.

Before withdrawing, Williams said she was looking forward to the semifinals.

“It’s been a long 12 months. Tennis has been played but not really, so ... hopefully this is like a new year where things will be different."

Garbine Muguruza beat defending Australian Open champion Sofia Kenin 6-2, 6-2 to advance to the semifinals, reversing their result of their 2020 final at Melbourne Park. She will next play No. 8 Marketa Vondrousova.

Two-time Australian Open champion Victoria Azarenka rallied from two breaks down in the first set and had to save two match points in the match tiebreaker before beating Yulia Putintseva 6-4, 1-6, 11-9 to advance at the Grampians Trophy, an event staged for the players forced into hard lockdown during quarantine.

On either side of a delay on outside courts because of rain, former Wimbledon, U.S. Open and Australian champion Angelique Kerber had a 6-4, 6-4 win over No. 8 Ons Jabeur and Belinda Bencic, the highest-ranked player in the tournament, lost 7-5, 6-2 to Sorana Cirstea.

Alexander Zverev rebounded from a narrow singles loss to Novak Djokovic to help Germany win the deciding doubles match that earned the team a spot in the ATP Cup semifinals at the expense of defending champion Serbia.

Struff and Zverev combined for a 7-6 (4), 5-7, 10-7 win over Nikola Cacic and Djokovic in the doubles, advancing to a semifinal against Russia on Saturday.

“It’s unfortunate we lost the tie — that’s what this competition is all about,” Djokovic said of back-to-back matches with Zverev. “It’s about the team, not about winning one match, singles match. Yeah, it’s a tough one.”

Pablo Carreno Busta clinched Spain a semifinal spot with a 6-3, 6-4 win over Michail Pervolarakis in the opening singles match against Greece. The win ensured Spain had enough points to top Group B, which also includes Australia.

“I knew we needed this point," Carreno Busta, who was playing again because No. 2-ranked Rafael Nadal had back stiffness, said. “With this victory, we are into the semifinals, so it was very important to us.”

Greece rallied for a 2-1 win over Spain, with Stefanos Tsitsipas beating Roberto Bautista Agut 7-5, 7-5 and then combining with Pervolarakis in the deciding doubles match — which lasted only one game before the Spanish pair retired.

Top-ranked Stan Wawrinka beat Alex Bolt 6-4, 4-6, 7-6 (5) to move into the quarterfinals of the Murray River Open along with No. 3 Felix Auger-Aliassime and No. 4 Borna Coric, who beat local favorite Nick Kyrgios 6-3, 6-4. A frustrated Kyrgios smashed his racket and threw it out of the 1573 Arena.