BEIJING, Feb. 1 (Xinhua) -- The unparalleled enthusiasm ignited by the upcoming 2022 Winter Olympics has triggered the rapid development of China's ice and snow industry. 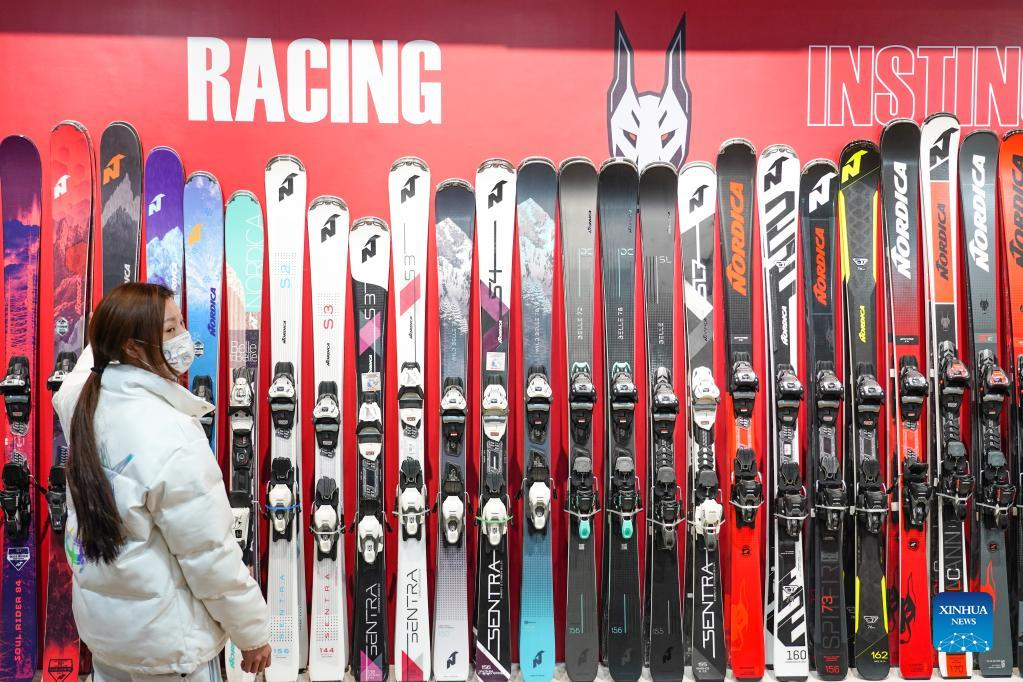 Strong demand for winter sports have brought mounting market opportunities, and a complete ice-snow industrial chain is coming into place in the country.

Over 346 million Chinese people have participated in winter sports activities since Beijing's successful bid in 2015, with a participation rate at 24.56 percent, data from the National Bureau of Statistics (NBS) shows.

The figure indicates that the country has already reached its goal of engaging 300 million people in winter sports.

Explosive winter sports infrastructure development has been seen in China in recent years. The country now has 654 standard ice rinks, a surge of 317 percent from 2015, and the number of ski resorts has risen from 568 in 2015 to 803 at present.

With indoor ice-snow venues springing up, the benefits of cold weather are no longer reserved for those living in the northern snowy regions, which used to be China's major winter sports destinations.

Among the 10 cities in which off-season skiing was most popular last summer, nine are in southern China, according to a report from online travel service provider Fliggy.

"The emergence of indoor venues throughout the country, especially in the south, has facilitated people's participation in ice-snow sports, and made it possible for them to enjoy ice and snow in each season," said Feng Xianqiao, secretary-general of a district ski association in southwest China's Chongqing.

China's ice-snow sports have achieved leapfrog development, narrowing the gap between China and the countries in Europe and America where winter sports have a long history, said Wang Bing, head of a Beijing-based research institute for sports development.

Ding considers skiing to be "one of the most popular new sports" amid the "rapid growth of China's sports consumption," and expects the country's number of ski trips to rank first in Asia this year and become first globally by 2032, reaching 60 million.

"Skiing has a strong capacity to stimulate related industries, especially tourism, and is a new growth pole in the sports industry," said Wang Yuxiong, director of the Sports Economics Research Center at the Central University of Finance and Economics.

Trips related to ice and snow tourism soared from 170 million in the 2016-2017 period to 254 million in the 2020-2021 period, and are forecast to reach 305 million during the 2021-2022 ice-snow tourism season, according to a report issued by the China Tourism Academy (CTA) and Mafengwo, a travel service and social networking platform.

Inspired by the upcoming Winter Olympics, around 70 percent of survey respondents expressed a willingness to make more ice-snow trips, and the income of the industry is expected to hit 323.3 billion yuan (about 50.7 billion U.S. dollars) in the 2021-2022 period.

Ice-snow tourism will become a major driver of China's winter tourism and ice-snow economy, with its total income expected to surpass 1.1 trillion yuan by 2025, according to the CTA.

Chinese tourists' consumption has expanded all over the country, whether attracted by the high-quality resorts in the northeast, the Olympic venues in the north, or the combined experience of snow and hot springs in the south.

"A new pattern in China's ice and snow economy has formed, with the northeastern region, Beijing-Tianjin-Hebei region and Xinjiang as its three pillars, together with the emerging belts in the Qinghai-Tibet Plateau as well as the country's central and western regions," said Dai Bin, head of the CTA.

Industry data shows that the younger generations and parents with small children are the major consumers of ice-snow tourism. Many are seeking products with more added value, preferring holiday packages offering high-quality facilities such as restaurants, hotels, shopping malls and children's parks, according to a 2021 report on China's ice-snow tourism consumption.

At Thaiwoo Ski Resort in Chongli District of Zhangjiakou City, one of the largest ski resorts in China, business people are racking their brains to present consumers with novel services and products.

"Thanks to the Winter Olympics, we can communicate and cooperate with well-known international enterprises and service providers, including first-tier international hotel brands," said Li Yongtai, Thaiwoo's executive vice president.

In the field of ice-snow equipment, global brands are focusing on the abundant opportunities in China, while multiple domestic brands have begun cooperating with foreign manufacturers.

Aiming to improve the ice-snow industrial chain, China has released a raft of policies to promote the construction of tourism bases and sports centers, the emergence of highly competent enterprises, and innovations in equipment manufacturing.