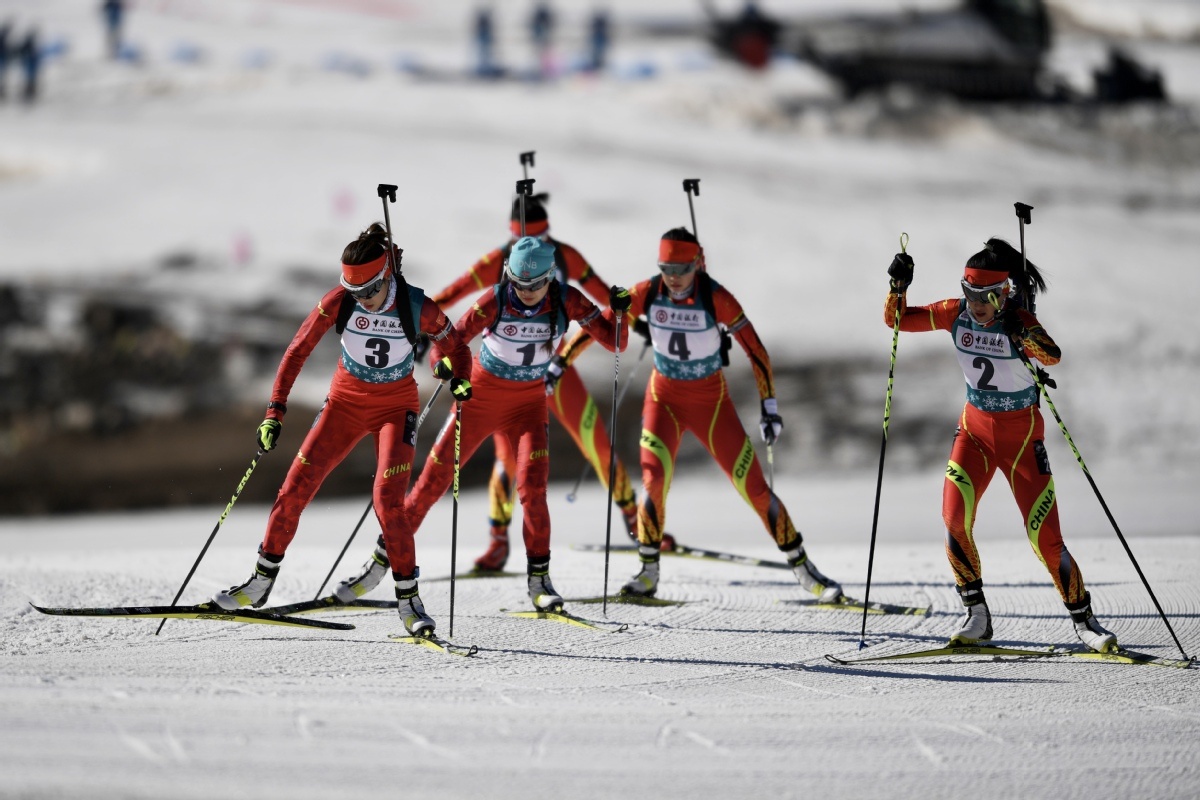 Athletes participate in a trial competition at the National Biathlon Center, a competition venue for the Beijing 2022 Winter Olympics and Paralympics, in Zhangjiakou, Hebei province, in February. (Photo: China Daily)

Tourist destinations in Europe are confident that the strong growth of China's winter sports industry will benefit their economies.

They believe that the nation's rising interest in such sports, fueled by staging the Beijing 2022 Winter Olympics and Paralympics, is especially significant for the recovery of international winter tourism.

Ice and snow sports in China are expected to attract 230 million visits by participants in the 2020-21 winter season, with revenue projected to top 390 billion yuan ($60.27 billion), according to the China Tourism Academy.

A recent report, "2021 China Ice and Snow Tourism Development", released by the academy, said the country's total investment in the sector exceeded 900 billion yuan over the past three years, including a total of 610 billion yuan for 2018 and 2019.

Emanuel Lehner-Telic, Asia regional manager at the Austrian National Tourist Office, said: "Those figures show the eagerness to become one of the world's leading winter sports nations. The speed at which China's winter sports industry has developed is unprecedented."

Batiste Pilet, promotions manager for China at Switzerland Tourism, said, "Since Beijing won the bid for the Winter Olympics, the whole industry has received unprecedented attention, and many investments, as well as promotions, have boosted visitor numbers."

The Chinese capital was selected to host the 2022 Winter Olympics after beating Almaty－the largest city in Kazakhstan－by four votes in 2015. Since then, winter sports development in China has been fast-tracked.

Pilet said: "Not only has the number and quality of ice and snow facilities grown, the number of snow sports enthusiasts has risen, too."

A total of 770 ski resorts were in operation nationwide in 2019, a rise of more than 67 percent compared with 2014, according to the 2020 China Ski Industry White Paper.

Oliver Sedlinger, a veteran Beijing consultant on the Chinese outbound travel market and founder of the tourism marketing consultancy Sedlinger and Associates, said: "In the Chinese market today, it is clear that skiing has become a mainstream interest and a lifestyle activity. It is attracting more and more Chinese consumers, including many beginners."

In its bid for the 2022 Winter Olympics, China pledged to raise the number of winter sports participants in the country to 300 million by next year, and estimated that the value of the winter sports industry would be 1 trillion yuan by 2025.

The country's rapid development of winter sports has also led to a growing number of Chinese visiting overseas destinations during the winter, with many European resorts benefiting from this in recent years.

According to Switzerland Tourism, Chinese tourists spent 200,974 overnight stays at mountain destinations in the winter of 2018-19, a rise of nearly 539 percent compared with the same period a decade earlier.

A similar trend has been witnessed in the neighboring Alpine nation of Austria. In the winter of 2009-10, the country saw just 55,000 Chinese arrivals, but the number rose to 345,000 two years ago.

Lehner-Telic said: "The number of Chinese winter guests has grown consistently for the past 10 years. Although they do not represent the largest group of international arrivals in Austria, they have been the fastest-growing by far."

China's outbound tourism has risen to top spot globally, with more than 169 million overseas trips made in 2019, according to the National Bureau of Statistics. As a result, European ski resort operators are looking to the country as a new source of market growth.

The Swiss ski resort of Laax is one destination to benefit from investment in the Chinese market. It has adopted a strategy of locating, engaging and convincing key opinion leaders and influencers to experience the resort firsthand, in the hope that their reports will attract Chinese travelers and winter sports enthusiasts.

A spokesman for the resort, who declined to be named, said, "Last winter, we were on track for a record year, with the highest number of overnight stays from Greater China.

"Our guests from China (including Hong Kong, Macao and Taiwan) are often experienced and have a good technical level on the snow. They are also well-traveled and looking for the quality and convenience that we offer."

The spokesman said, "Technically, the top Chinese athletes are performing at a very, very high level and this is clearly evident in recent results at events such as the Laax Open."

Sedlinger, the consultant, said a significant number of more experienced Chinese snow sports enthusiasts have developed a passion for and a long-term interest in their hobby over the past 10 years. They will eventually travel abroad, with international destinations benefiting as a result.

However, he said that while staging the Beijing Winter Olympics next year has encouraged Chinese to take to the ice and snow, winter sports in the country are still in their infancy, so having a nuanced and targeted marketing strategy is likely to pay off.

"A new breed of skiers in China, looking for specific qualities typically found at an international destination, may also bring their own ideas, habits and requirements with them, offering a lot of potential to these destinations if they are willing and able to embrace it," Sedlinger said.

"Destinations which follow a long-term plan and are able to build a consistent and credible brand, as well as standing out from their competitors, will ultimately succeed and become popular among Chinese and other Asian consumers."

"They are very different. A few may be so keen on their sport that they stay on the slopes all day, but most will just ski for one to two hours and spend the rest of the time doing other things," he said.

"Due to a lack of time, most Chinese will only stay one or two days for skiing. They are also attracted by other activities such as sightseeing and shopping."

Tourism officials in Otztal, an Alpine valley in the Austrian state of Tyrol, believe the region's wide variety of winter tourism activities led to it becoming the most popular winter destination for Chinese visitors to the country, based on figures from the Austrian National Tourist Office.

Daniel Goldstein, international market manager for the Otztal Tourism Board, responsible for tourism promotion at the resort and in Soelden and Obergurgl, said: "We offer a range of activities for winter sports fans and tourists. It is not only about skiing in winter.

"Visitors can go snowshoe hiking, tobogganing, ice skating, cross-country skiing, or visit 007 ELEMENTS, the James Bond cinematic installation in Soelden, where locations in and around the resort were used in the film Spectre. Those visiting the Aqua Dome can indulge in a day of relaxation at the thermal spa.

"Skiing itself is not the reason Chinese visitors book a holiday in Soelden, as these guests also tend to take advantage of the different attractions in Otztal."

Finland is another top European winter destination favored by Chinese over the years, particularly the northern city of Rovaniemi, capital of Lapland and hometown of Santa Claus.

Supported by the China-Finland Year of Winter Sports in 2019, the Nordic country welcomed more than 384,000 arrivals from the Chinese mainland that year, with over 107,000 such visits made during the peak winter season, according to Visit Finland.

In 2019, Chinese visitors to Finland spent a total of $271 million, with each arrival spending an average of $680, Wu said, which is high compared with other markets.

Due to the pandemic, tourist destinations, including ski resorts, have seen a dramatic slump in business since the start of last year, with a lack of Chinese visitors due to travel restrictions.

However, tourism experts are confident that these travelers will play a major role in helping the industry recover in many areas worldwide.

Arlt, from the China Outbound Tourism Research Institute, who sees Chinese tourists spurring an international travel revival, said, "The light at the end of the tunnel is a Chinese lantern."

Pilet, from Switzerland Tourism, said, "Given the situation with the pandemic, I believe the 2022 Winter Olympics will have a special significance and, hopefully, will coincide with the recovery of international winter tourism."