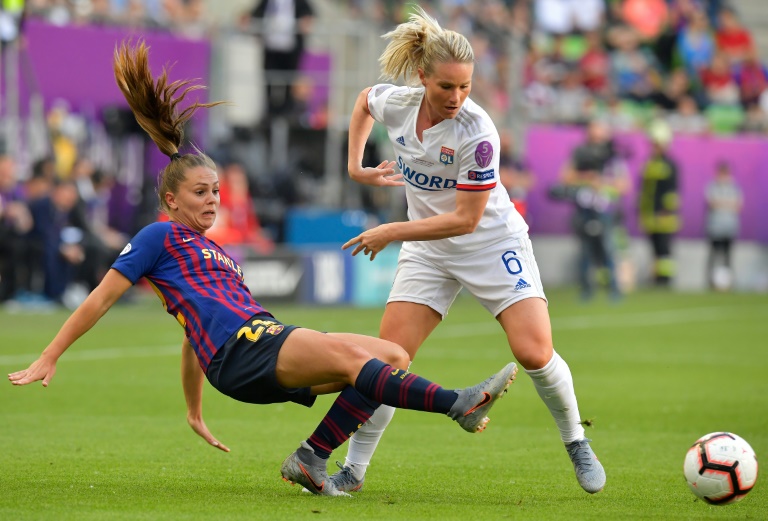 Lyon beat Barcelona in the final of last season's women's Champions League. The women's game faces an "almost existential threat" because of the coronavirus crisis, a new report has said. (Photo: AFP)

The coronavirus pandemic presents "an almost existential threat" to women's football, according to a report by global players' union FIFPro published Thursday.

Female players the world over, like their male counterparts, have been forced to stop playing with countries going into lockdown to try to halt the spread of the virus, which has claimed more than 134,000 lives according to an AFP tally.

Much attention has been given to the economic impact on the far richer men's game of the suspension, but FIFPro warns that women's football -- despite recent growth -- is particularly vulnerable, with less established professional leagues, lower salaries and less investment meaning "the fragility of the women's football eco-system is exposed by the current situation".

FIFPro has called for "special measures" to safeguard the women's game as it says its growth "is now at risk of receding. Without having secured solid structural foundations for long-term sustainability, some women's leagues and clubs are releasing players, cutting contracts and closing down."

Leagues across Europe are currently playing a waiting game to see if they will be able to complete their suspended seasons.

In England, the Women's Super League -- including some of the continent's wealthiest clubs -- have been hoping to finish their campaign by the end of August, but it depends on lockdown measures being eased.

According to French players' union the UNFP, only a third of female players in France wish to restart the season, with the rest insisting health matters should remain the priority.

Former Ballon d'Or winner Ada Hegerberg, who plays for leading French and European side Lyon, admitted in an interview with AFP last week that "everything is uncertain" for women's football.

"If you see how the biggest men's clubs are struggling, you can only imagine how this is going to affect women's teams," she warned.

FIFPro's report highlights the vulnerability of female players, with just 18 percent having professional contracts as recognised by world governing body FIFA in 2017. Over 60 percent of paid players took home less than $600 a month.

"We have to protect players as people and as workers and avoid mass unemployment and recession," the report concludes.

"The women's football industry will require innovation and intervention from across the private sector and public sectors, from policymakers and governing bodies, to broadcasting companies and sponsors."