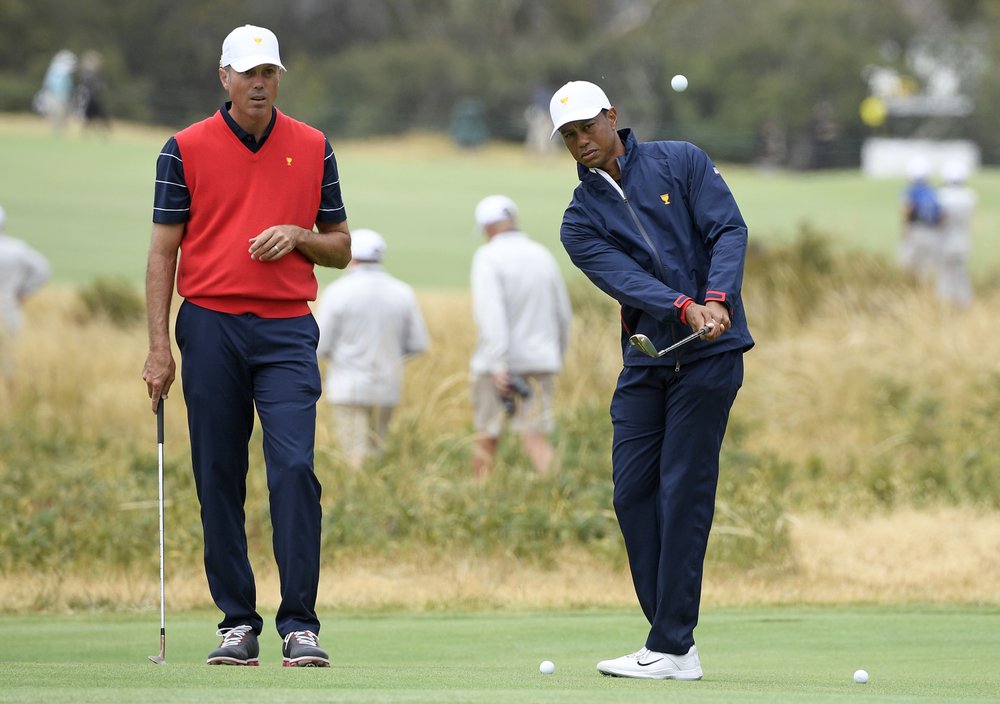 They first met 25 years ago in Thailand, neither knowing then how much their paths would cross in golf.

“I was trying to figure out what the hell am I going to do with maybe playing professional golf down the road,” Woods said. “We talked a little bit, and he took a liking to me.”

Over the next two decades, no one finished runner-up to Woods more than Els, a rivalry as one-sided as the Presidents Cup.

That’s where they meet for perhaps the final time, as captains at Royal Melbourne.

The Presidents Cup starts Thursday, and Woods is attracting all the attention as the first playing captain in 25 years. As much as he refers to the Big Easy as a “giant of a man,” no one casts a larger presence in golf than Woods.

Els saw it coming a long time ago. In one of their greatest duels, they matched eagles and birdies on the 18th hole at Kapalua in 2000 before Woods won the playoff with a 40-foot birdie. It was another kick in the gut for Els, who said that day: “He’s 24. He’s probably going to be bigger than Elvis when he gets into his 40s.”

By the end of the year, Els was runner-up to him in consecutive majors by a combined 23 shots.

The 50-year-old Els sat on one side of a long table Wednesday, wearing reading glasses to go over his pairings for the opening session. Woods, who turns 44 at the end of the month, was on the other side of a 2-foot-high board, announcing he would be playing in the first match.

The International team is desperate to end two decades of failing to beat the Americans, who are going for their eighth consecutive victory and already lead 10-1-1 in the series.

For Els, it’s another large task.

“No one of this generation has gotten the credit they probably deserve because Tiger has been Tiger,” Adam Scott said. “It’s the same for Phil (Mickelson) and Ernie. They have played second fiddle because Tiger has got the great record he has and he beat them quite often, too.”

Scott paused briefly, adding with the slightest of smiles, “I think Ernie is maybe using that as some motivation this week.”

In most team events, the captain can only do so much. At Royal Melbourne, Woods has taken on a little more.

The charter flight from the Bahamas arrived on Monday a little later than planned, leaving the US team with only two practice rounds. Woods played 18 holes on Tuesday. The next day, he played for a little more than an hour before peeling off to watch the rest of his team play.

He can rely on his assistants — two of them, Fred Couples and Steve Stricker, previously were captains — but he doesn’t want to miss out on all the captain’s duties. Everyone on the team has portrayed Woods as relentless in detail, sometimes texting at all hours of the night when he has thought about strategy or pairings.

“You definitely get more texts between 1 and 4 a.m. than any captain, that’s for sure,” said Justin Thomas, who plays with Woods in the opening fourballs match against Marc Leishman and Joaquin Niemann. “He takes it very seriously. He wants to be a captain that has a great winning record.”

Tony Finau was teammates with Woods in his Ryder Cup debut last year and saw his influence as a player.

As captain, he sees another level.

“The detail ... I think he could probably do the weather here and the wind direction for all of us,” Finau said. “It doesn’t surprise me just how prepared he is because that’s the reason why he is who he is. To have him captain the team, a huge part of it is just learning from him. You can’t top that type of experience.”

Els has gone about his business more quietly, not willing to share specifics on his use of analytics to develop pairings. He has encouraged his players to spend time in practice rounds during tournaments. But he has been unusually guarded in his comments, wanting to keep everything inside the team for now.

“I’ll tell you Sunday night what exactly has been transpiring,” Els said. “But we have a system we are following, and I can’t let anything out of the bag more than that.”

Whatever secrets he is holding, his team still has to chip and putt, to win holes and win matches, to get the crowd on its side early. The US team has not trailed after any of the sessions since the second round in 2005.

Now it’s up to his players. Els, unlike Woods, has no influence on the outcome except for his plan and his leadership.