Even without a home team to cheer for, Chinese fans and enterprises remain enthusiastic about the Qatar World Cup, as the global soccer showpiece, held for the first time in the Middle East, opened on Sunday. 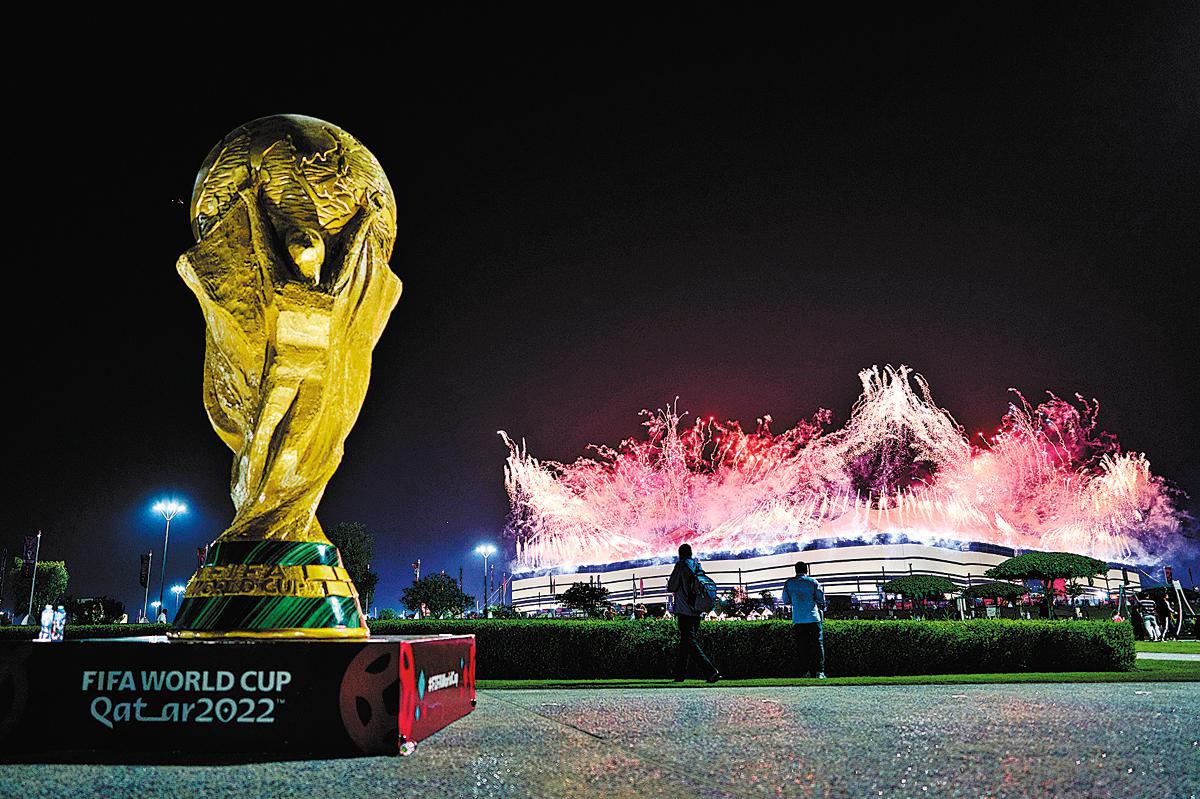 The 2022 FIFA World Cup kicks off on Sunday. (Photo: Xinhua)

Cheered on by a rousing capacity crowd at Al Bayt Stadium in north Doha, the 2022 FIFA World Cup kicked off 29 days of action on Sunday with a Group A game between the host team and Ecuador, which raised the curtain on the first edition of the marquee tournament held in winter in the Northern Hemisphere in an Arab country.

Considered the most popular single-sport event on the planet, the tournament will see the world's top 32 teams, drawn into eight four-side groups, play first in the round-robin group phase before the knockout stage to compete for the coveted trophy last won by France at the 2018 edition in Russia.

Although Team China failed to qualify for the Cup finals for the fifth consecutive time, the fan following from China is likely to remain strong. Broadcast viewership is expected to reach new heights thanks to the favorable time difference, which allows the audience in China to watch most of the games in prime hours.

Even with international travel still a challenge due to the COVID-19 pandemic, at least 7,000 tickets for the tournament had been sold to Chinese fans by mid-October, said Mohamed Al-Dehaimi, Qatari ambassador to China, during a recent interview with Global Times.

Support from China has also come in a more concrete way, with most of the tournament's stadiums, its official transportation system and its accommodation facilities featuring contributions from Chinese builders and providers.

The 80,000-seat Lusail Stadium, which is scheduled to host the eye-catching final game, was designed and built by China Railway International Group with advanced energy-saving technologies and sustainable materials.

The "Free Zone", a fan village that is around 20 minutes by subway from downtown Doha, features 6,000 portable cabins made of containers produced by Chinese companies in Guangdong and Zhejiang provinces for low-budget accommodation.

"You can see it, how it is in good condition and of high-quality. The good thing with the cabin is you have full privacy with your own bathroom, and with the air conditioning and fan," Omar Al-Jaber, executive director of accommodations with the Cup organizing committee, told China Central Television.

Raring to promote their brands overseas, Chinese enterprises, led by four official FIFA sponsors — Wanda Group, Hisense Group, smartphone manufacturer Vivo and dairy brand Mengniu — have provided more sponsorship revenue for the host than companies from any other nation, with nearly $1.4 billion in total investment, according to Global Data, a London-based consulting and analytics company.

"To be connected with the World Cup is still considered the most direct way to sell their brands and products in the international market when the occasion only happens once every four years," Song Xiangqing, an economist and vice-president of the Commerce Economy Association of China, told Beijing Business Today.