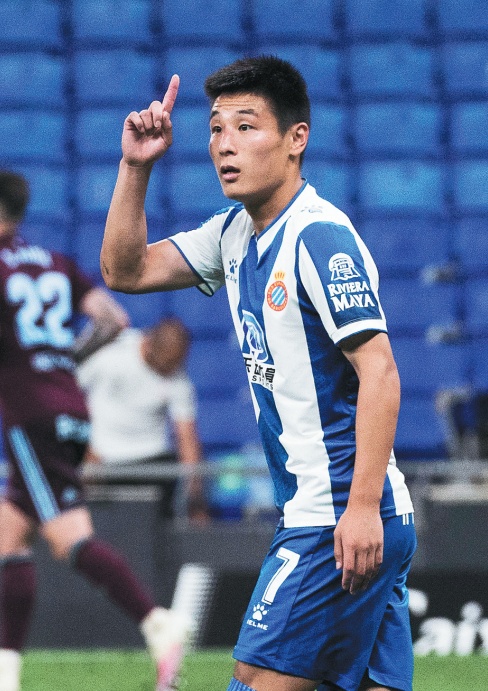 China international Wu Lei is sticking with Espanyol for another season despite the club's relegation to Spain's second division.

Wu Lei's decision to remain with relegated Espanyol may not have been greeted with universal approval by fans back home, however the humble Chinese ace has warned that by rushing to secure a move elsewhere he risked "setting the bar too high".

"I know some people believe I should be in a European top-flight league. It's like there should at least be one Chinese here, otherwise something is missing," Wu told Xinhua. "But like I have said, we cannot be too confident or too self-abased. Even if it's the second division in Spain, its matches are more competitive than the Chinese Super League (CSL).

"A player will quickly encounter difficulties if he wants to go too high too fast. Just like Japan and South Korea, we were at the same level 20 or 30 years ago. But now they are ahead of us. They are on a very steady path of development. Their players don't mind if they play in a top-flight league or a second-tier league.

"I see a gap between Chinese soccer and the very top leagues, but I alone cannot fundamentally change Chinese soccer. I always say that if there can be 20 to 30 Chinese players playing in more competitive foreign leagues, even in second divisions, that will help us."

Wu arrived at Espanyol in January 2019 after helping Shanghai SIPG win the 2018 CSL title. For the next year and a half, he has carried a heavy burden of expectation as China's sole representative on the pitch in a top European league.

However, the Barcelona-based side has been a downward spiral since the departure of head coach Rubi to Real Betis in June last year. Since then four head coaches have been in charge, all failing to avert Espanyol's first relegation since 1993.

Wu contributed eight goals in all competitions, and still managed to impress enough with his all-round play to attract interest from other European clubs, including two English Premier League teams－high-flying Wolverhampton Wanderers and the now-relegated Watford.

Guaranteeing minutes on the pitch, though, was an important consideration for Wu as he weighed up those offers.

Providing he stays injury-free next term, Wu is almost certain to see plenty of game time for the team he affectionately refers to as the "Espanyol family".

However, he warned that promotion back to Spain's top flight at the first attempt will be no easy task.

"The target for next season is to return to La Liga, and this is a must," Wu said. "From the perspective of the size of the club and the overall strength of the squad, we have advantages. But we need to work as a team to achieve this goal together.

"But this is also a really tough task, because the second division is also very competitive. The fight for promotion will be very fierce. And our rivals will try their best to prove themselves when fighting against a relegated team. It's not easy."

Plenty of observers have urged Wu to move on－chief among them being former Team China and Manchester United player Dong Fangzhuo. "No matter if he goes to the Premier League or not, I think leaving Espanyol will benefit Wu," said Dong.

However, renowned Chinese soccer guru Xu Genbao, an ex-youth coach of Wu's, believes his former pupil has made the right choice.

"I always communicate with Wu. He did not ask me about his next move, and I don't speak too much about this to him," said Xu.

"I hope he can stay in the second division and grow to return to La Liga. This is the ideal scenario."

Relegation was not the only setback Wu endured this year－the 28-year-old had more serious matters on his mind when he and his wife tested positive for COVID-19 in March.

Wu was given the all-clear two months later, but he admits that period was especially tough.

"That was unexpected. I was not in a good mood after I tested positive," said Wu, who nonetheless always appeared upbeat in his social media posts at the time. "I worried not only about myself. I was the first in my family who showed symptoms, then it was my wife.

"My wife's life was more difficult than mine. Her symptoms lasted longer than I did. And she also needed to cook, do chores and look after all of us. She sacrificed a lot to support me playing in a foreign country… I thought a lot during this time. Now I cherish my family and our health more."

That family focus appears to have been a major factor in his decision to stay in Spain.

"I know what I want. Staying here can be attributed to many reasons. After all I'm not alone in a foreign country," Wu said.

"I have family and children studying here. My life here is more stable with the help of my teammates and my club. This feels like a big family."