SPORTS Young shooters up for challenges at Tokyo 2020

Young shooters up for challenges at Tokyo 2020 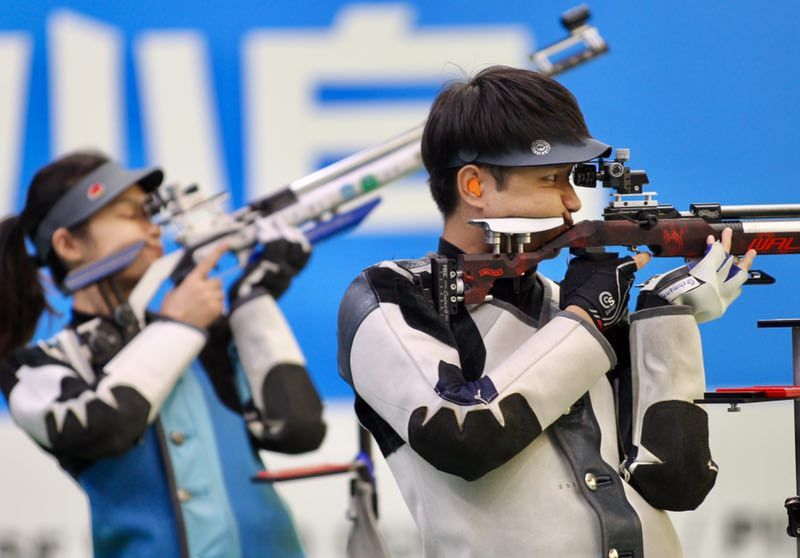 China is sending a young legion to the Tokyo Olympics for pistol and rifle events as promising young athletes excelled from the Chinese shooting team Olympic qualification series that concluded earlier this week.

The nine-day tournament in Guangzhou that wrapped up the multiple-stop series was arranged in line with the Tokyo 2020 competition schedule. A total of 19 athletes were selected to fill the full quota places China earned for pistol and rifle events, with an average age under 25 years.

Among them are 11 "Generation Z" shooters, especially 16-year-old Sheng Lihao, who qualified for both men's 10m air rifle individual and mixed team events. Xiong Yaxuan, 24, scored 44 in women's 25m pistol, which was four hits better than the current world record.

To select in-form athletes after the games were postponed by one year, the shooting team adapted the timetable and qualification system, increasing the gravity of qualification points for the last four stops.

While there are veterans in the roster, for example, 32-year-old Chen Dongqi (women's 50m rifle three positions). However, they are not necessarily richer in Olympic experience compared with their young counterparts.

For Sheng, as well as Zhang Yu (10m air rifle mixed team) and Xiao Jiaruixuan (women's 25m pistol), they haven't even competed in an international event, where they need to achieve the Minimum Qualification Score by the prescribed deadline in June to be eligible for Tokyo 2020.

Li believed that the team is faced with an arduous task to make sure these less-experienced shooters can keep calm and give their best at the Olympics.

"We will focus on honing their basic skill and techniques, which are fundamental to the victory. At the same time, we need to improve their mental toughness, which is crucial to success," the deputy director noted.

As for the goal, Li hoped the team could bounce back from an embarrassing one-gold record in Rio five years ago.

"We have hopefuls in several events, but it's hard to give a specific number [of medals earned] as the Olympic Games is always with uncertainties," he pointed out.

"China is a shooting powerhouse and the sport always sets a good start to China's Olympic journey. Hopefully, we can do the same in Tokyo, setting a joyful tone for Team China."

Pang, suffering lumbar and cervical pain from time to time, was eager to bag medals from his fourth Olympics.

"That's why I'm training hard," said the 34-year-old. "I believe I'm capable of a podium finish as long as I give a normal play and I definitely want to bring more glory to the Chinese shooting team and myself."

"My goal is certainly a good result, and hopefully let the Chinese national anthem be heard on the awarding ceremony," he added.

Instead of drawing a clear goal, many young shooters concentrate on the process of preparing for the Olympics and the experience of being there.

"Of course, I'm very excited," Xiong said after clinching a berth in the Olympic roster. "I hope I can be 120% prepared and build up my confidence during the process."

"This is my first Olympic Games, so I do not have too many thoughts. I'll give my best and let's see where I can reach," said 23-year-old Shi Mengyao, who led the qualification point tally to qualify for women's 50m rifle three positions in Tokyo.