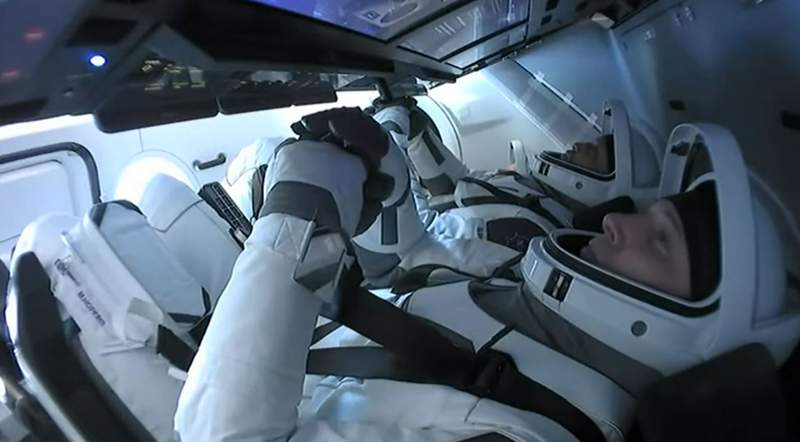 Four astronauts just returned from the International Space Station described on Thursday their reentry into Earth's atmosphere and ocean splashdown after more than 160 days in space.

A SpaceX Crew Dragon capsule carrying the crew back to Earth splashed down off Florida early Sunday in NASA's first nighttime ocean landing in more than 50 years.

"There was a point where I was just saying to myself, breathe. Inhale, because I felt really heavy -- I felt like those cartoons when they experience G and your face is just sagging down," said American Victor Glover, one of the astronauts in the group called Crew-1.

It was the first regular mission to be taken and then returned from the ISS aboard a spacecraft built by billionaire Elon Musk's company.

"I expected it to be so dynamic -- and so challenging -- that the actual event I think, was a little less than what I was expecting, and so it was enjoyable all around," Glover said.

The weight of acceleration was concentrated in the chest, making it difficult to breathe.

But then, "launch and entry are such unique experiences," he said.

NASA has contracted SpaceX to launch astronauts into space from US soil, something that has not been possible since 2011 with the end of space shuttle program.

Since that time until now NASA was forced to pay for rides to the ISS aboard Russian Soyuz vessels, which land on dry land.

"Landing in the water was interesting because none of us really knew what to expect, but I would say from my standpoint, it felt a little bit softer than landing on land," said US astronaut Shannon Walker.

"You spend less time under a parachute on the Dragon than you do under the Soyuz," he said.

Soon, space "tourists" -- civilians who are not professional astronauts -- will take their places on Dragon.

US astronaut Mike Hopkins believes that space tourists will be able to handle the rough reentry rides.

After the civilians go through some centrifuge training "it's not going to be completely unique to them," he said.

"Impact was very, very minimal, and right after splashdown. We feel the waves, we come back to the water planet.