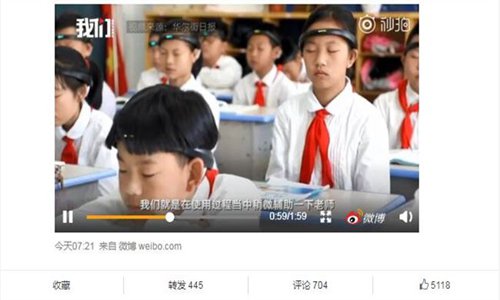 Focus1, a "mind-reading" headband developed by a US-based start-up, has been sold on China's online marketplace Taobao, and is on the market in 14 other countries, amid controversy that the product invades students' privacy.

The headband manufacturer BrainCo said it was jointly developed by Harvard University and Massachusetts Institute of Technology scientists and can send signals to show whether the student is focused.

The company has branches in Boston, the US and in Hangzhou, East China's Zhejiang Province. Yang Zhangpeng, the company's director of public relations, told the Global Times on Tuesday that the headband is a mature product that has been sold in 15 countries, including the US, Italy and the UK.

"The product has been widely used in educational institutions, professional sports training organizations and driving schools to improve concentration and learning efficiency," Yang said. "An Italian team that trains racecar drivers in Formula One also uses the headband."

"We only started to sell the product in the Chinese market at the end of last year, while sales in the US began earlier," Yang said.

The company only collects and analyzes the brainwaves in regions of the brain associated with users' attention.

This is done when a user wears the device on their head, and the product provides training courses to help them improve their concentration, Yang said.

"We have special data protection measures. Brain data is one of the core secrets of the company. It is safely stored," Yang noted.

The response came after reports of a primary school in Jinhua, East China's Zhejiang Province used the headband to raise students' concentration, which sparked controversy over violation of privacy.

On China's Twitter-like Sina Weibo, netizens have shown anger toward the "innovation" as well as its high price. A Weibo user named "Fuer Jiawa" said, "Is this product treating schools like zoos and monitoring students like animals?"

The primary school halted the trial on Friday amid controversy.

Xiong Bingqi, deputy director of the Shanghai-based 21st Century Education Research Institute, said that allowing having students wear the headbands would equate to using the students as learning machines. "It's anti-education in disguise of technological innovation," he said.