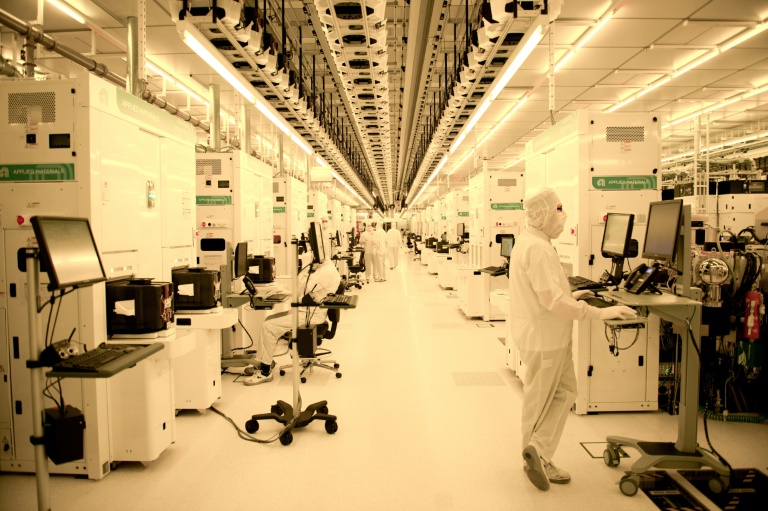 200 East German engineers brought over to Texas from Dresden in the late 1990s 'were in unbelievably good shape', remembers a veteran at the plant. (Photo: AFP)

When US computer processor maker AMD was building a factory in the eastern German city Dresden in the late 1990s, it sent around 200 local engineers for training to its site in Texas.

"Not even two days in, they could almost explain the innards of a chip better than the engineers there," recalls Karin Raths, a 20-year veteran at the plant -- now owned by US-based chipmaker Globalfoundries.

"They were in unbelievably good shape thanks to those years in the German Democratic Republic (GDR), the scarcity economy, the famous reverse engineering" of Western technology under the pre-1989 regime, she adds.

While the end of the GDR brought de-industrialisation and unemployment as state-owned enterprises were broken up and sold off, Dresden reveals one of the communist state's hidden strengths.

Almost 70,000 people worked at the city's microchip maker Robotron at its height, just before the Berlin Wall fell 30 years ago.

Much of the eastern bloc's semiconductor industry was based on peeling apart and copying western products -- "reverse engineering" -- as comparable facilities and machines for research and manufacturing were rare beyond the Iron Curtain.

Cold War technology embargoes meant some western equipment could only be acquired through slow, expensive and underhand means.

While it could store an impressive 60 pages of text, it would never enter mass production.

"Even if the GDR semiconductor industry wasn't competitive on the global stage, the know-how was here in Dresden," says Robert Franke, head of the city's business development office.

"It was in people's heads, and that was something that could be built on."

After reunification in 1990, Saxony's first state government quickly recognised microelectronics' potential and backed it with subsidies and a streamlined bureaucracy still praised by business leaders today.

Drawn by the well-trained human resources and the low cost of investments in the region, Western companies moved in, joining some former Robotron engineers who founded their own high-tech companies.

These days, the work in massive, boxy factories among the broad fields and wooded hills around the Saxony capital Dresden might be recognisable to a time traveler.

Almost the same number of people as employed by Robotron -- around 65,000 -- work in the state's high-tech industry, helping generate far greater prosperity than before 1989.

Huge factories belonging to Globalfoundries and former Siemens subsidiary Infineon churn out chips that can end up in cars, consumer products like smartphones or more specialised applications like passports or power conversion devices.

At the start of the production lines enter round, pizza-sized silicon "wafers".

In sterile rooms, dozens of machines lay down layer upon layer of circuitry in hundreds of light and chemical processes, watched over remotely by engineers.

The technicians who keep the units turning 24 hours a day must hide skin and hair under spotless white coveralls as they pass through airlock-like entrances into the clean areas.

Such workers are "a fiercely fought-over resource here in Saxony, a resource that's extremely important to us," Globalfoundries factory chief Thomas Morgenstern says.

Staff flow constantly between the roughly 2,000 high-tech companies in the Dresden area -- from the international giants to tiny outfits with just a few people.

Both big companies recruit dozens of trainees each year, while the renowned Technical University and research institutes educate engineers.

But with an eye on Germany's fast-aging population, Raik Brettschneider, who heads Infineon's Dresden operation, says staff shortage "worries are definitely there, and we have a lot to do".

- Between far-right and future -

With his neat suit, tieless collar, squared-off glasses, and cropped hair, Brettschneider could be a typical German manager, if it weren't for the fact he was born in the east in 1978.

"Ossis" in top jobs are still rare in businesses across reunified Germany.

The Saxony native is confident about the economic opportunities ahead but gloomy about a surge in support for the far-right AfD party across the former GDR.

"We're absolutely undermining ourselves" with such votes, Brettschneider laments.

"We need the best minds from all over the world. We don't even know if someone turns us down or doesn't even apply" over the fear of the anti-immigrant party, he adds.

But city official Franke -- who also grew up locally -- says the city is doing a lot to increase its attractiveness across Germany, including pumping cash into schools and kindergartens to attract young families.

An international flair is also visible in the trendy Neustadt district, where students working at laptops crowd cafes and English can often be heard on the streets.

Franke relates that when he goes abroad, especially to Asia, "I get asked, how have you managed to develop Dresden so positively?"

The city's story is particularly resonant among those gazing at another Cold War divide that remains unhealed.

"The Koreans ask about the reunification," Franke says, adding that "one day, the northern part will have to be integrated".