10 years on, Beijing-Shanghai line on fast track to high-speed glory 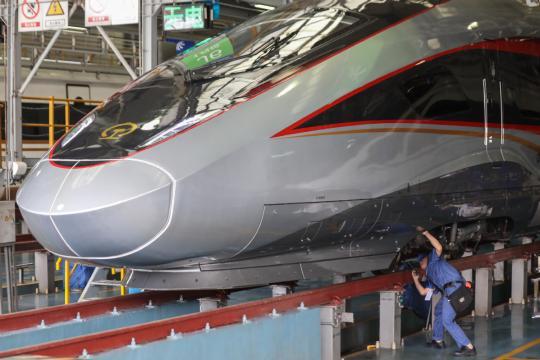 The COVID-19 epidemic hurt China's high-speed railway sector last year, but the Beijing-Shanghai section, which will turn 10 on Wednesday, remained profitable, spurring the introduction of a new model of Fuxing bullet train on the prime stretch, offering better services and safety, said senior executives of the company that operates the line.

Beijing-Shanghai High Speed Railway Co Ltd, the operator, listed in Shanghai in January 2020, just before the epidemic broke out. Thanks to a series of efforts, the Beijing-Shanghai high-speed railway managed to raise the quality of its services and adjust the operational capacity in spite of the impact of the epidemic on passenger numbers.

The 1,318-kilometer railway opened to public on June 30, 2011.The company operates the nation's busiest and most populated high-speed line that links the Beijing-Tianjin-Hebei region and the Yangtze River Delta region, both of which are densely populated and economically vibrant.

A new model of China's Fuxing high-speed train, known as the CR400AF-BZ, can carry 1,285 passengers and shortens the ride duration to 4 hours and 37 minutes.

Among the conveniences offered on board are intelligent lighting in toilets, smart vending machines in dining cars, and stabler mobile telephony and internet access.

"Along with rising frequency and number of trains, there has been a steady rise in passenger numbers," said Shao.

Profitability meant that the company could invest big in the research, development and application of advanced technologies and facilities, which helped optimize capacity and raise the level of service, thus meeting the requirements of diverse passengers, Shao said.

The company's successful listing is a milestone for the securitization of high-speed railway assets, said Wan Fang, a director on the company's board appointed by Ping An Asset Management Co, the second-largest shareholder of Beijing-Shanghai High Speed Railway.

Wan said high-speed railway development over the past decade is a testament to both the effective leadership of the Communist Party of China and the strengths of Chinese political system. They provide the nation with superb coordination capability and strong project execution power, which made the project costing more than 200 billion yuan possible.

Back in 2008, in a bid to support the central government's decision to build the mega project, an insurance fund consortium led by Ping An Asset Management Co was launched.

Over the past decade, 1.35 billion passenger trips have been made safely on the railway, according to a Xinhua News Agency report that cited China State Railway Group Co Ltd.

The railway turned profitable in 2014 and ever since has stayed so. The company's net profit surged at an annual average of 39.4 percent between 2014 and 2019.