More than 2 billion tons of ice melted on Greenland last Thursday, with over 40 percent of Greenland ice showing signs of melting. It is very unusual for such a huge ice loss at this time of year, scientists said. 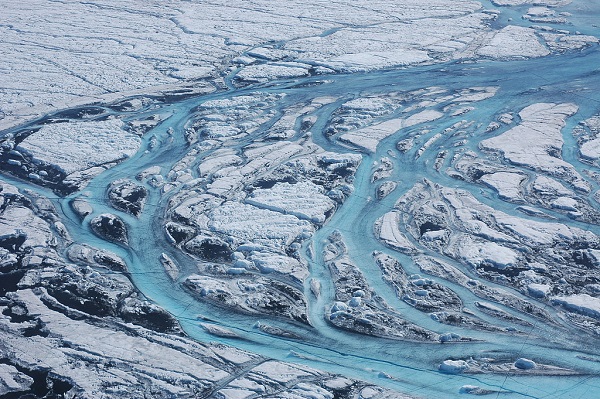 A sudden and unusual melting

This sudden spike in melting “is unusual, but not unprecedented,” according to Thomas Mote, a research scientist studying Greenland's climate at the University of Georgia, CNN reported.

Mote said that this time the melting “is comparable to some spikes we saw in June of 2012.”

The year 2012 saw Greenland’s surface melting more intensely than in any earlier years in since satellite records started in 1979. For a few days in 2012, 97 percent of the entire ice sheet indicated surface melting, according to the National Snow and Ice Data Center (NSIDC) in the US.

What caused the sudden melting?

Scientists believe that the sudden melting peak was caused by a weather pattern.

The temperature over the ice sheet became warmer because a pressure ridge pushed warm and humid air into the portions of Greenland from the Central Atlantic. The pressure ridge became stronger over the past week or two, according to Mote.

As the snow and ice melt, the sun’s rays could not be reflected back into space, resulting in more of the mid-summer sun’s heat to be absorbed into the ice and melt it again, Mote said.

A big year for ice melting on Greenland

Scientists from the Danish Meteorological Institute announced early in May on the Polar Portal website that the start of the Greenland melt season this year fell on April 30, second only to 2016, when a very unusual weather pattern caused a very early start to the melt season in mid-April.

Polar Portal is a website for Danish research institutions to display the results of their monitoring of the Greenland Ice Sheet and the sea ice in the Arctic.

“The start of the melt season occurs on the first of three consecutive days where more than 5% of the ice sheet has melt at the surface,” said scientist Peter Langen on the website.

“We use a pretty strict definition as we want to make sure it is a consistent start to melting and not just a blip due to unseasonal weather,” he said.

This melting spike at such an early time this year signals the year 2019 could be a record breaker as for the ice loss on Greenland.

Jason Box, an ice climatologist at the Geological Survey of Denmark and Greenland, predicted in late May that "2019 will be a big melt year for Greenland,” according to ScienceAlert, a science news website.