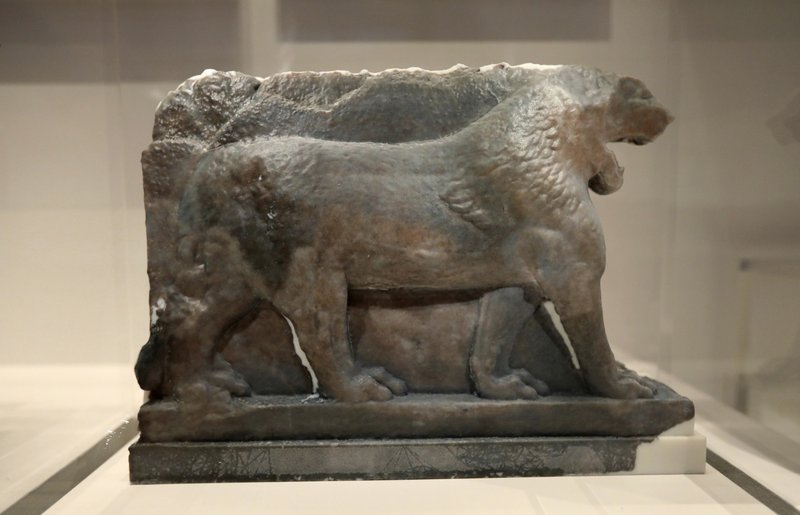 A 3D printed recreation of the ancient Lion of Mosul, which was destroyed by the Islamic State group at the Mosul Museum in Iraq, is displayed as part of the 'What Remains' exhibition at the Imperial War Museum in London, Wednesday, July 3, 2019. (Photo: AP)

A figure of a roaring lion, about the size of a loaf of bread, is the latest step in the fight to preserve culture from conflict.

The sculpture is a replica of a colossal 3,000-year-old statue from the Temple of Ishtar in Nimrud, in what’s now Iraq. The stone statue was one of many artifacts from the Mosul Museum destroyed by the Islamic State group after it overran the city in 2014.

The replica Lion of Mosul, which can be viewed online , was modelled from crowd-sourced photos taken by Mosul Museum visitors in happier times and 3-D printed as part of Google’s digital arts and culture project.

It’s going on display at London’s Imperial War Museum in an exhibition that looks at how war devastates societies’ cultural fabric — and at the ingenious and often heroic steps taken to preserve it.

Chance Coughenour, digital archaeologist at Google Arts and Culture, said the exhibition “highlights the potential of technology — both in terms of digitally preserving culture and telling these amazing stories in engaging new ways.”

It also illustrates a grim truth: culture has long been a casualty of conflict. Museums, monuments and even music are often deliberately targeted by combatants.

“The destruction of culture is sort of an accepted sideline to war,” Imperial War Museum curator Paris Agar said Wednesday. “One of the main reasons for destroying culture is to send a message: We have victory over you. We have power over you. It’s because culture means so much to us; if we didn’t care it wouldn’t be a tool.”

The horror that rippled around the world in April at the sight of Paris’s Notre Dame cathedral in flames is proof of the powerful attachment we have to buildings and artworks.

The most shocking parts of the exhibition are the records made by the destroyers: meticulous Nazi lists of artworks they’d stolen; video of the Taliban blowing up Afghanistan’s 1,000-year-old Bamiyan Buddhas; footage of IS militants methodically sledgehammering statues in the Mosul museum.

The show covers a century of destruction, from the German army’s World War I destruction of the university and library of Louvain, Belgium to the shelling of the National and University Library in Sarajevo during the Bosnian war in 1992.

The 1940 devastation of England’s Coventry Cathedral by Germany’s Luftwaffe is shown alongside the destruction of the Frauenkirche in Dresden by Allied bombing in 1945.

Both were later rebuilt, in very different ways: Coventry with a modern cathedral beside the ruins of the old, Dresden brick by brick from the original plans.

Images of destruction sit alongside stories of resistance and rescue. The show features the work of the World War II Monuments Men, who saved Nazi-looted artworks, and tells the story of Khaled al-Asaad, a scholar who devoted his life to studying Syria’s ancient site of Palmyra and was murdered by IS in 2015.

Some militaries have made efforts to prevent looting and destruction. The British Army recently set up a Cultural Property Protection Unit — modern-day monuments men and women — and the exhibition includes a pack of “archaeology awareness playing cards” distributed to US troops in Iraq and Afghanistan.

Internationally backed projects to train craftspeople and archaeologists in Syria and Iraq may help those countries recreate what has been lost. And the law has made small steps toward bringing cultural vandals to justice. In 2016, Islamic extremist Ahmad Al Faqi Al Mahdi was convicted of destroying World Heritage cultural sites in Timbuktu, Mali — the first war-crimes conviction by the International Criminal Court for cultural destruction.

“It has always been part of warfare,” Agar said. “All that has changed in recent years is the awareness and attempt to stop it.”

The display is one of three linked exhibitions at the museum under the heading Culture Under Attack. The second looks at how British museums evacuated their treasures from London to keep them safe during World War II — and what they left behind. The third, Rebel Sounds, explores music as resistance, focusing on clandestine jazz fans in Nazi Germany, punks fighting for the right to party during Northern Ireland’s violent “Troubles,” a Belgrade radio station that championed free speech and Serbian techno in the war-torn 1990s, and musicians from Mali who defied an Islamist ban on music.

Culture Under Attack opens Friday and runs to January 5. Admission is free.