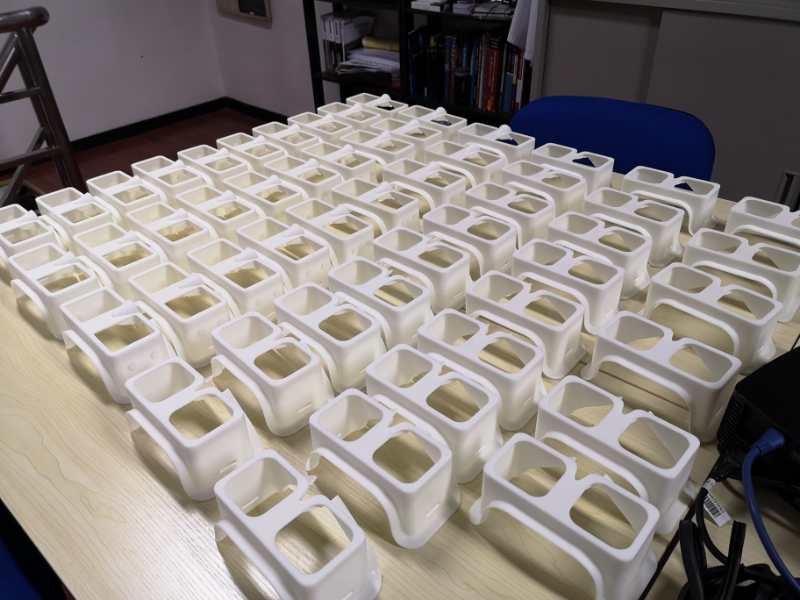 Parts of protective goggles made using a 3D printer by Hua Zikai and his team members in Shanghai. (Photo: China Daily)

Since the COVID-19 outbreak started, university lecturer Hua Zikai, together with his colleagues and students, has been designing protective equipment for medical workers and manufacturing it with 3D printers.

"At the beginning of the outbreak, many factories ceased production during Spring Festival, which made the equipment shortage more urgent to tackle. Having realized that, I called on my colleagues and students to help produce what doctors needed," Hua said.

His research team cooperated with about 40 hospitals nationwide, including orthopedics, rehabilitation and cardiology departments.

The associate professor from the School of Mechatronic Engineering and Automation at Shanghai University came up with the unconventional 3D-printing idea after he learned from his doctor friends about the shortage of protective gear. "At that time, some doctors even wore swimming goggles to protect themselves. Given the situation, I thought why not 3D print this equipment?" Hua said.

His team specializes in designing medical implants such as bone nails, plates and joint prostheses.

They hadn't 3D printed any goggles before, but they had experience in 3D printing other medical equipment, such as the braces used to attach artificial limbs.

On Jan 28, Hua and his team established a working group of eight teachers and graduate students to design the goggles, 3D print them and distribute them to hospitals.

The first model was produced 24 hours after the team started the task. After being improved for a better fit, production of the goggles began two days later.

By the end of March, with the assistance of several of the university's departments, Hua's team had delivered about 300 goggles to doctors in Shanghai.

"Although our products do not exactly meet the standard of the medical equipment used in infectious diseases departments, we could temporarily relieve the emergency in the face of the shortage. The more we printed, the safer doctors would be," Hua said.

With limited resources, 3D-printing machines and personnel in his lab, Hua decided to release the model's design for free to enterprises that could put them into mass production.

The design was given away with the proviso under a "gentlemen's agreement" that companies who used it sold the goggles for only a small profit to hospitals or groups fighting COVID-19.

"I wouldn't allow them to profit from a national disaster," he said.

About eight companies downloaded the model and it turned out all of them did it merely to help, Hua said.

His team members also designed and made new protective equipment such as visors for doctors and shields for patients.

"We learned that visors were only available for fever clinics, not for outpatient clinic doctors who were also exposed to patients who possibly had contracted the novel coronavirus. We wouldn't let face masks be the first and only protection for medical workers so we then started to produce visors," Hua said.

Later, teachers and students helped cut and attach headbands and elastic to the visors, which they bought from a company in Guangdong province.

About 1,000 visors were made and sent to hospitals in Shanghai, including the Shanghai General, Xinhua and Huashan hospitals.

Now, the team is working on a device to help isolate patients on an operating table from doctors and other medical staff.

"Doctors are vulnerable to infection during intubation operations. They can wear a medical helmet, but it is too expensive."

The method involves placing a hinged Perspex box over the head and thoracic region of a patient so doctors have access to him or her.

"There hasn't been equipment like this in China and we are still refining it," Hua said.

His team members are passionate about the designs and making them a reality.

"During the outbreak, the students said they deeply understood that engineering is human-oriented and equipment designs should benefit society. They made the goggles and were brave enough to shoulder the responsibility," he said.