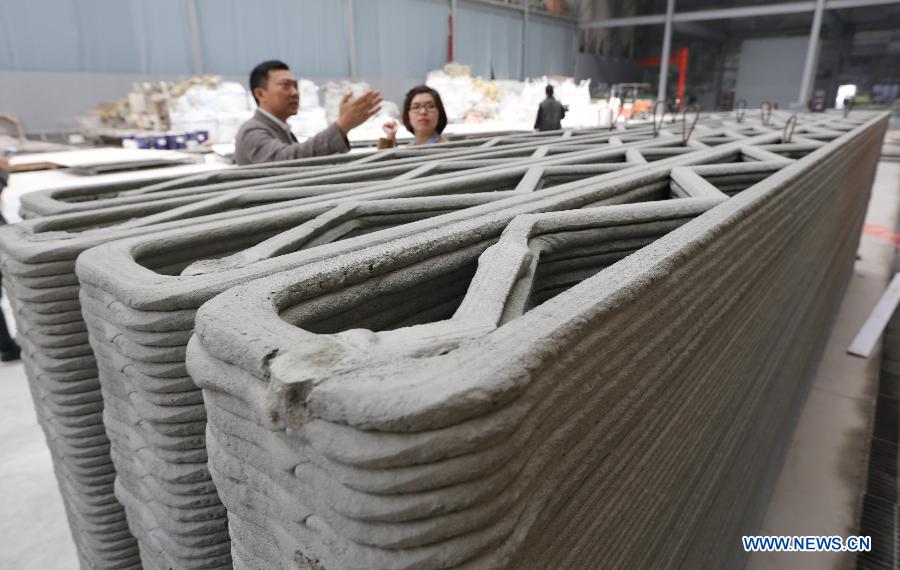 The inventor of 3D-printed house Ma Yihe (L) shows the 3D-printed walls of a house in Shanghai, east China, April 12, 2014. Ten houses have been built of construction waste using a 3D printing technology in 24 hours in Shanghai. (Photo: Xinhua)

SHIJIAZHUANG, Nov. 24 (Xinhua) -- A rural house in north China's Hebei Province has been catapulted into fame recently. For one thing, it was not built brick by brick but constructed scan by scan with giant 3D printers.

With vaulted ceilings and concrete outer walls decorated by weave patterns, Zhao Xiujuan's house in Wujiazhuang Village of Zhangjiakou, the co-host city for the 2022 Winter Olympics, covers an area of 106 square meters and boasts three bedrooms, a kitchen and a restroom.

When Xu Weiguo, a professor with the School of Architecture under Tsinghua University, came up with the idea of building a 3D-printed farmhouse in Wujiazhuang, there was an outpouring of concern from villagers.

"How can a big house be printed?" "Is it strong enough?" Regardless of skepticism from her fellow villagers, Zhao asked Xu and his team to rebuild her old house with 3D printing technology.

At the construction site, 3D-printing robotic arms built up concrete materials layer by layer to form the foundation and walls. After the roof was printed separately, it was put on the wall by a crane.

The construction of the house was completed in two weeks.

The kick-starter brought success and brushed away concerns. "There were only two people on each device. They pressed the button, then a house was built. It's amazing," said a villager without giving his name.

In recent years, China's 3D printing market has been growing fast, and the technology has been widely used in aerospace, construction, automobile, shipping and other fields.

Experts even tried to take 3D printing to the next level, by building 3D-printed houses in villages, thus improving the rural living environment.

"This technology can save manpower and construction cost while increasing efficiency and quality," said Xu, adding that it can keep the design and construction of traditional houses while creating beautiful irregular curved surfaces.

Before the 3D-printed farmhouse took shape, Xu and his team have applied 3D printing technology to build other structures at home and abroad, including a 26.3-meter-long pedestrian bridge in Shanghai.

China has made continuous efforts in technological innovation to transform and upgrade the traditional construction sector.

In July 2020, a guideline released by 13 central departments called for efforts to integrate intelligent construction technologies into the whole industrial chain, and set short- and long-term targets for the industry's high-quality development.

"At present, there are still a large number of houses and infrastructure to be built in China. Intelligent technologies can solve the labor shortage problem faced by the construction industry, liberating workers from their heavy labor," Xu said.