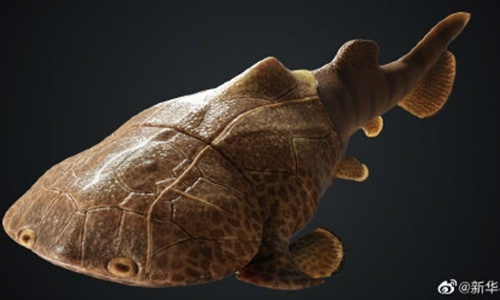 A 423 million year old jawed fish fossil has been found in Xiushui county, Southwest China's Chongqing Municipality, making the city the second place in the world where a complete new species of jawed fish is preserved.

The discovery of Bianchengichthys, a new Silurian maxillate placoderm, was published in Current Biology, a leading scientific journal, on Saturday, and was later introduced to the public by the Chongqing Municipal Bureau of Planning and Natural Resources at a press conference on Monday.

A study suggested that the new archaic fish is closely related to the origins of modern jawed vertebrates.

The jawbone of the fish represents a newly discovered transformation between the jawbone and teeth of modern fish and that of the primitive placodermi, providing important fossil evidence for the origin and evolution of the jaws and dentition of modern jawed animals, including humans.

Paleontological fossils of vertebrates with clear location and stratigraphic records have previously been discovered in Chongqing, including reptiles (dinosaurs, turtles) and fish fossils from the Early Jurassic period about 200 million years ago.

The Silurian fish fossil fauna discovered in Xiushan has a wide distribution range, a large age span, rich species, and high scientific research value, which has advanced the distribution history of vertebrate fossils in the primary strata of Chongqing by at least 200 million years.