Chinese enterprise GalaxySpace is set to launch its first 5G internet satellite by the end of 2019, the company said in Beijing. 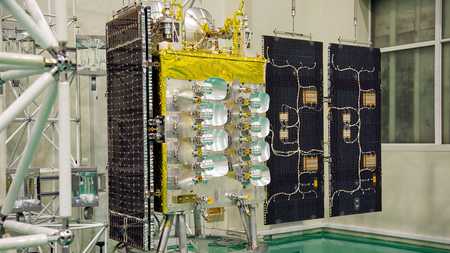 The company wants to use 5G technology to build a new kind of satellite network system that can bring cheaper and faster connection to the world.

Traditional satellite connections require a dish or a special kind of cellphone to get the signals, which many users prefer not to invest on.

If the satellites can directly provide 5G signal to the ground, users will be enabled to switch between satellite and ground 5G networks in a seamless manner, which makes things easier.

Another possible advantage of this new satellite is the speed. Current network satellites usually orbit at high earth orbit (HEO) and the signals have to travel long distance, creating a noticeable delay in the connections.

But the new satellite operates in low earth orbit (LEO) which is only about one twentieth high as HEO, leading to a much shorter delay that may no longer be noticeable.

According to GalaxySpace, the new network will also be cost-effective compared to the 5G network on the ground, because satellites can cover a much larger ground than ground stations.

"Covering the entire world with LEO satellites may cost only one percent of base-station solutions," GalaxySpace founder and CEO Xu Ming said on the company website.

Xu is also the co-founder of Cheetah Mobile, which is famous for its CM-series of mobile apps.

GalaxySpace said the new satellite can cover an area 30 times larger than Shanghai. But the total bandwidth is only 10 Gbps, which is obviously not enough to serve a big city.

As you may have noticed, covering the entire Earth surface will require a large amount of such satellites. The company said it will launch more than 1,000 of them, making the network look like competitors like Starlink and OneWeb.

Starlink designed its own protocol of communication and may require additional hardware to use.