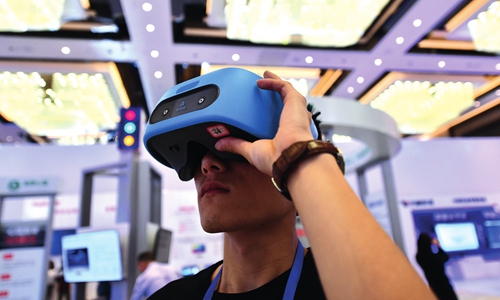 Chinese telecom operators and internet companies are ramping up efforts to explore new opportunities for 5G promotion, and their efforts will push forward the country's 5G commercialization despite stress caused by COVID-19 empidemic.

During the country's fight against the virus, China Mobile, Alipay and Ali Health collectively launched the first 5G package in the industry to include a number of medical and health benefits, according to Beijing Business Today.

Users can apply for the China Mobile 5G health package through Alipay app.

The new package is just one example of the country's recent 5G promotions. In support of epidemic prevention and control efforts, operators have ramped up promotion of 5G applications such as telemedicine and teleconferencing to further enhance the depth and breadth of commercial 5G usage.

China Mobile and a third-party enterprise have developed a "5G cloud epidemic-resistant robot" that works in hospitals for 24 hours and can replace medical staff to enforce a number of tasks including disinfection and drug delivery.The efforts have pressed the fast-forward button on 5G commercialization in 2020, which is known as the year of 5G.

"The coronavirus is activating 5G use among the masses, who might have had no idea how 5G will reshape people's lifestyle," industry analyst Liu Dingding told the Global Times.

By the end of October 2019, China's three major operators had launched 5G packages. Data showed that the number of China Mobile 5G package users had reached 6.736 million by the end of January this year.

Ma Jihua, a veteran industry analyst, told the Global Times that the country's pace of 5G construction is not likely to be severely affected, and that the impact of the epidemic will only be temporary.

"Currently, some construction work has been delayed due to the extended holidays and lockdowns of some villages and cities. But after the epidemic is over, operators will definitely strive to complete their whole-year tasks, and we should believe in the strengths and abilities of our country's operators," Ma said.

China Unicom announced on Wednesday that it would complete the construction of 100,000 5G base stations with China Telecom in the first half of the year, and move on to complete 250,000 base stations nationwide in the third quarter.

On February 22, China's Ministry of Industry and Information Technology said that the pace of 5G commercial usage should be accelerated, and China will strive to complete its development goals and tasks for the whole year.