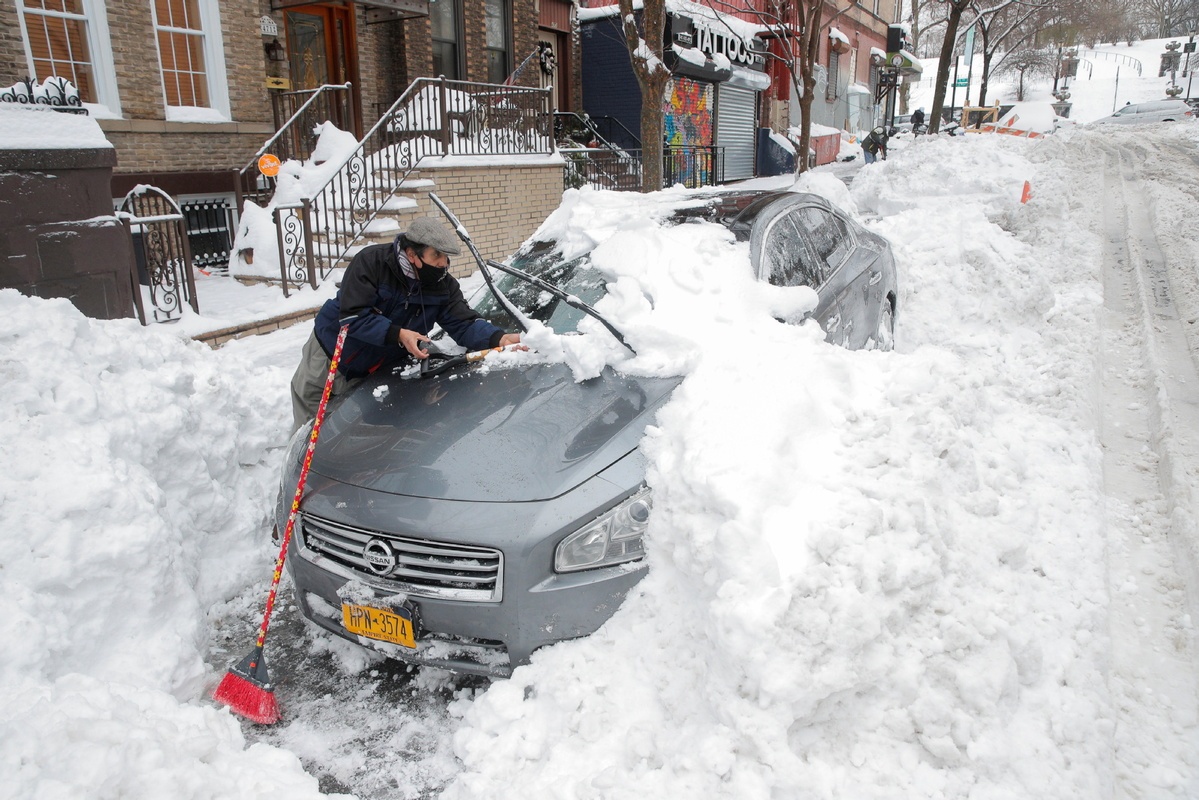 A man removes snow from a car during a snowstorm in the Brooklyn borough of New York, Feb 2, 2021. [Photo/Agencies]

It is being called the "Big Freeze" as abnormal winter snowstorms and freezing temperatures cut a crippling swathe through large parts of the United States.

The southern state of Texas is, for the first time ever, blanketed in snow paralyzing the state's electricity grid, causing deaths and filling hospital beds already struggling with COVID-19 cases with dozens of people suffering from hyperthermia.

Over in Europe and the Middle East, heavy snowfalls have blanketed the Acropolis and other ancient monuments in Athens and halted COVID-19 vaccinations in the Greek capital as many services across the country are cut by blizzards.

For decades scientists have been warning about the growing impact of climate change as sea levels rise, threatening low-lying areas around the world and the future viability of Pacific Island nations.

Glaciers are already melting at a rate never seen before as well as the great ice sheets that cover Greenland.

On Feb 7 a Himalayan glacier broke and caused a major flash flood in the northern Indian state of Uttarakhand, smashing two dam projects and forcing the authorities to evacuate hundreds of villages. Dozens are feared to have died.

A study by the British Antarctic Survey in Cambridge, England, two years ago said glaciers from Asia's mountain ranges including the Himalayas are melting much faster than previously thought and could threaten regional water security within a few decades.

Scorching temperatures in Australia and the west coast of the United States have resulted in massive forest fires while parts of Siberia, not known for its warm weather, saw temperatures rise to above 38 degrees Celsius last year.

Professor Will Steffen, spokesman for the Climate Council in Australia and an expert on climate change, says it seems "counterintuitive when we talk about a warming planet then we have these abnormal cold conditions."

"What we are seeing in the United States is a rush of cold air sweeping down from the Arctic," he tells the China Daily.

"Normally that cold air is held there by what is called the jet stream which runs around the Arctic in latitude roughly mid-Canada through Siberia.

"That normally tends to keep the cold air up there. The reason for that is that there is a strong temperature gradient between the equator which is hot and the Arctic which is cold."

He said there can be no argument about climate change … the planet is getting warmer.

"The gradient between the equator and the North pole is weakening and cold air brakes through. When that happens, it drags warm air up.

"While much of the planet is getting warmer the Arctic is warming at twice the global average."

Last year, Dr Judah Cohen, director of Atmospheric and Environmental Research, co-authored a paper that found a strong uptick in winter storms in the northeastern US in the decade leading up to 2018. This, Cohen and some other scientists argued, is a symptom of heating in the Arctic, occurring at a rate more than twice the global average, that is disrupting long-established climatic systems.

Indeed, in Siberia the melting of the permafrost is starting to alarm scientists.

The Yale School of the Environment also said late last year: "What we do know is that if the Arctic continues to warm as quickly as climatologists are predicting, an estimated 2.5 million square miles of permafrost — 40 percent of the world's total — could disappear by the end of the century, with enormous consequences.

"The most alarming (thing) is expected to be the release of huge stores of greenhouse gases, including methane, carbon dioxide, and nitrous oxide that have remained locked in the permafrost for ages. Pathogens will also be released."

The rapid thawing of permafrost has enormous implications for climate change.

According to the Yale School of the Environment there are an estimated 1,400 gigatons of carbon frozen in permafrost, making the Arctic one of the largest carbon sinks in the world.

"That's about four times more than humans have emitted since the Industrial Revolution, and nearly twice as much as is currently contained in the atmosphere.

"According to a recent report, a 3.6 degrees Fahrenheit ( 2 C) increase in temperature — expected by the end of the century — will result in a loss of about 40 percent of the world's permafrost by 2100."

The Climate Council's Steffen said melting of the permafrost has resulted in an explosion of insects.

"The forests in Siberia and Canada are now being attacked by bark beetles which weaken the trees and in hot conditions the trees burn releasing more greenhouse gases into the atmosphere," he said.

He said while governments are now starting to take action the private sector is starting to step in … driven mainly by investors who do not want to get caught investing in fossil fuels.

"Why invest in something you may not get a return on," he said.

"What we are seeing this winter in many parts of America is consistent with research that has connected what's happening in the Arctic with extreme weather patterns in the mid-latitudes, according to Jennifer Francis, a senior scientist at Woodwell Climate Research Center in the United States.

"The polar vortex can elongate, stretch into different shapes and even split. We have seen a very big disruption this year."

Global heating is causing warmer winters, and record cold temperatures are now being clearly outpaced by record hot temperatures, but the complex interplay of climatic conditions still requires further scrutiny, to the consternation of some and even mockery among others, including former US presidents.

"We still have a lot to learn on this," said Francis. "I think this year will be studied for a long time."

Vinod Thomas, visiting professor at the Lee Kuan Yew School of Public Policy at the National University of Singapore, said: "From the epic wildfires across Australia and the US last year, to the record heat of Siberia, climate change played havoc across the globe in 2020.

"This year will probably be no different," he told the China Daily.

He said the amount of CO2 in the atmosphere hit a record 417 parts per million (ppm) in May 2020, which is just 33 ppm under the 450 ppm scientists warn must be avoided, and a threshold we could cross in just 17 years at the rate of 2 ppm more every year.

"As a result of the accumulating carbon in the air, the past decade was the hottest on record, and 2020 tied 2016 for the hottest year," he said.

"The situation the Arctic turns dire. In mid-2020, the temperature reached 38 C in Siberia, the hottest ever for the Arctic Circle, accelerating the melting of sea ice. The summer of 2020 saw sea ice area at its second lowest on record. The loss of ice is a result of climate change, and it is also a driver of it.

"Bright white sea ice reflects heat from the Sun, and back out into space. But the Arctic is heating twice as quickly as the rest of the world, and as with less ice, there is less reflective protection. Large areas of open dark water, that takes the place of ice, absorbs more heat, aggravating global warming."

He added: "The one good purpose this extreme weather can serve is to help policymakers and the public to connect the dots and act. These disasters represent clear and present danger, they are here, they are now, and they take lives and livelihoods. They should flag the urgency is acting now.

"Among them, if carbon neutrality is one step in mitigating climate change and 2050 is a target date, the new weather patterns warn that advancing that date to 2030 is an imperative."