TECH After Huawei, US fills its Entity List with five more Chinese organizations related to supercomputers

After Huawei, US fills its Entity List with five more Chinese organizations related to supercomputers 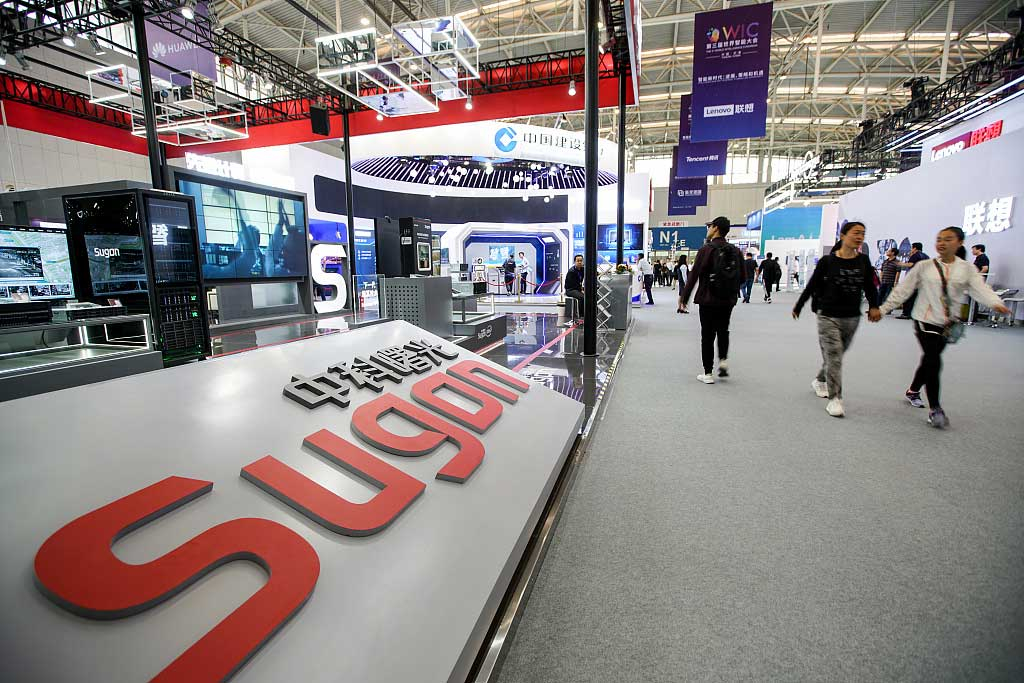 Sugon's booth at the World Intelligence Congress in Tianjin on May 16, 2019. (Photo: VCG)

It was ZTE. It was Huawei. Now it's Chinese supercomputer makers. The US resorts to its Entity List again to strangle the technology endeavors of China.

AThe Bureau of Industry and Security (BIS) of the US Department of Commerce (DOC) made the ruling on Tuesday, saying Sugon and JICT are "acting contrary to the national security or foreign policy interests of the United States."

The ruling will be effective on June 24.

The ruling also put China's Higon on the list. Higon is a Tianjin-based IT company controlled by Sugon. Higon created two companies with US chip giant AMD, the world's second largest maker of computer CPUs.

Notable products of Higon include Hygon Dhyana, a variant of AMD's EPYC server chip that powered the Sugon TC8600, the world's 43rd fastest computer according to TOP500.

Putting Higon on the Entity List will harm AMD's business, which is an obvious backfire by the US government on a US-based company.

The attack on JICT may also turn out to be a miss. JICT's latest Sunway chip was designed under open standards that do not require approval from any US company. The originality of the design can be proved by Sunway-TaihuLight, the world's third fastest computer.

A supercomputer is usually built with many computing cores (CPUs) and graphics cores (GPUs). Each of the two types of cores does roughly half the job. The CPUs usually come from Intel's Xeon series while the GPUs from another US chip giant NVIDIA, which is famous of making "graphic card" for gamers and "mining cards" for cryptography enthusiasts.

But the Sunway-TaihuLight does not have many GPUs to help computing. It's CPU -- a massive amount of Sunway SW26010 chips -- does all the job alone.

This big difference in design made Sunway-TaihuLight special on the TOP500 supercomputer list. The supercomputer also retained top position on the list for a two years.

The sudden expanding of the Entity List is viewed by media as a new leverage for the China-US talk at the coming G20.

Presidents of the two countries have agreed to talk about the trade war at G20, which is being held this month in Osaka, Japan.

Will the new leverage work? Probably not. China has repeatedly told the US to retain some sincerity during the trade talks. But America just kept doing the opposite. Putting more Chinese organizations on the Entity List will lead the talk to nowhere.

"It benefits when China and US cooperate and it hurts when they fight. This is a theory proven time and time again by the history and reality," said a commentary from CCTV on Saturday.

Chinese Foreign Ministry spokesperson Lu Kang said, "I'd like to reaffirm this. China strongly opposes the US cracking down on Chinese companies with national force. We urge the US side to stop the wrongdoing, treat Chinese companies equally, and create conditions for firms from both countries to carry out normal trade and cooperation.”

Some experts say there is yet a silver lining for China, because the US trade war and tech blockade have exposed the dependency of Chinese enterprises on US high-tech exports, especially chips which are used in nearly all digital products. Analysts say China should develop its own chip industry and become self-sufficient in the sector.