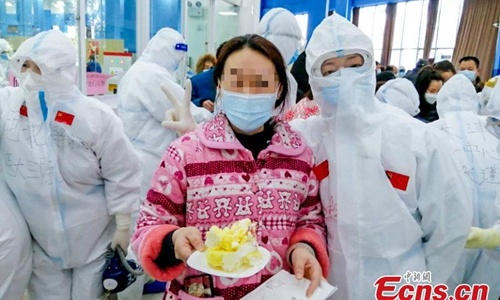 A special birthday party for 48 patients and medical workers who were born in February, is held in a cabin hospital in Wuhan, Central China’s Hubei province on February 17,2020. The event was held with the aim of easing patients’ psychological pressure, and boosting their confidence. (Photo provided to China News Service)

As a senior psychological consultant and a volunteer for the Tree Hole project, Yang Bingxiang has developed a habit of checking the monitoring reports sent three times a day by an artificial intelligence (AI) monitoring robot.

Generated by the robot automatically, the reports are about netizens whose comments are rated as “showing a high risk of committing suicide.”

After seeing the information, the volunteers act quickly and set up a psychological help group to intervene in the possible suicidal behavior of the netizen.

"I’m glad that we can take the initiative to find people with suicidal tendencies with the help of AI,” Yang said to the Global Times.

The Tree Hole project was initiated in April 2018 by Huang Zhisheng, a professor with Wuhan University of Science and Technology. Tree holes are places on the Internet where people express secrets and their feelings and thoughts without worrying about being discovered by people around them in reality.

The project brings together a group of people who pay attention to tree holes on the Internet, applying AI technology to monitor negative comments showing suicidal signs among netizens on social platforms, and then related information collected by an AI robot is sent to volunteers for suicide intervention.

In some tree holes, netizens show signs of suicide or even make online appointments to commit suicide together.

Huang said that the idea of collecting negative comments was inspired by a depressed girl who called herself “Zoufan” on her Sina Weibo account, according to an interview with Quanxianzai, an information platform.

Eight years ago, on the morning of March 18, 2012, “Zoufan” issued a delayed-release micro blog, in which she said “I suffer from depression, so I just choose to die, for no important reason. Don't worry about my death. Bye bye.” In the real world, on the night of March 17, a senior female student at a university in Nanjing hanged herself in her dormitory, according to China News.

After “Zoufan” committed suicide, her last micro blog became a tree hole for netizens who want to express their despair. As of January 21, 2021, there were over 1 million messages below her last blog. In just one hour between 13:00 and 14:00 on Jan 21, about 60 new comments were made, most of which expressed negative emotions and mentioned "wanting to die."

Noticing the tree hole, Huang invented a robot on August 2018 to find such negative comments in similar blogs.

"The comments will be rated in terms of suicide risk and given a scale from one to ten. For a suicide risk rated above five, the messages will be sent to volunteer groups by the monitoring robot. The report includes information such as the rating level of suicide risk, gender, age, address, the comment left by the netizen itself and the link to the blog,” Yang told the Global Times on Monday.

Language is so complex that you cannot find a template, Yang said. The robot is based on AI technology and semantic analysis and has been upgraded many times. Now it can automatically remove 99 percent of irrelevant information, and the accuracy of the suicide risk identification is 83 percent on average, Huang said.

So far, the team has over 30 WeChat groups and nearly 600 volunteers, including artificial intelligence experts, psychiatrists, psychological counselors, scholars and students.

"By the end of December 2020, the tree hole group had assisted 11,715 people at high risk of suicide and temporarily prevented 3,629 potential suicides,” Yu Jia, executive secretary of Beijing Abundance Foundation, which is in charge of the project, told the Global Times on Monday.

Giving a helping hand amid epidemic

During the epidemic, the robot has provided information channels as well as psychological intervention and treatment assistance for more than 400 people who need help.

Yang told the Global Times that amid the epidemic, many people come to her for help via the Hubei and Hunan office of the Tree Hole project. “Some of them are medical staff, and some have COVID-19 cases in their families. There were also some people coming to me because of marital conflicts or sibling conflicts due to spending more time with their families during the epidemic.”

She recalled a middle school girl who tried to commit suicide she had rescued during the epidemic.

The girl repeatedly cut her wrist. With her mother quarantined because of taking care of the girl’s grandmother who had been infected with COVID-19, the girl had to stay at home alone. Because of the epidemic, the classes at her school were moved to online platforms. Being alone at home, she couldn't keep up with the online classes, which led to aggravation of her depression.

"I then advised her to go to the school's psychological counselor, and her condition slowly returned to stability,” Yang told the Global Times on Monday.

"In order to comfort those netizens who need psychological help during the epidemic, we conducted 24-hour real-time monitoring of large tree holes on Sina Weibo, and issued information three times a day,” said Huang in an interview with Quanxianzai. “Fortunately, there are not so many people who want to commit suicide because of the epidemic.”

"During the year 2020, the project held 14 training lectures for volunteers, and trained more than 800 people in total. The trainers include domestic experts with rich experience in suicide intervention,” Yu said.

According to World Health Organization data in 2017, depression affects 4.3 percent of the global population, or about 300 million people. In China, there are about 40 million people suffering from depression. The number of patients is still increasing at a rate of 10 percent per year. There are 130,000 suicides in China every year, and 40% of them are depression-related.

The project has given volunteers more sense of achievement. “Before I joined the project, I could only provide some information to people with depression, but found that they were not very active. After joining the rescue team, we can take the initiative to find people with suicidal tendencies,” Yang said.

However, the project is also facing challenges. “We cannot solve many of the practical factors that lead to their psychological problems, such as campus bullying, debt, and family conflicts. A mechanism is needed to link the project with the current social psychological service system, she said.