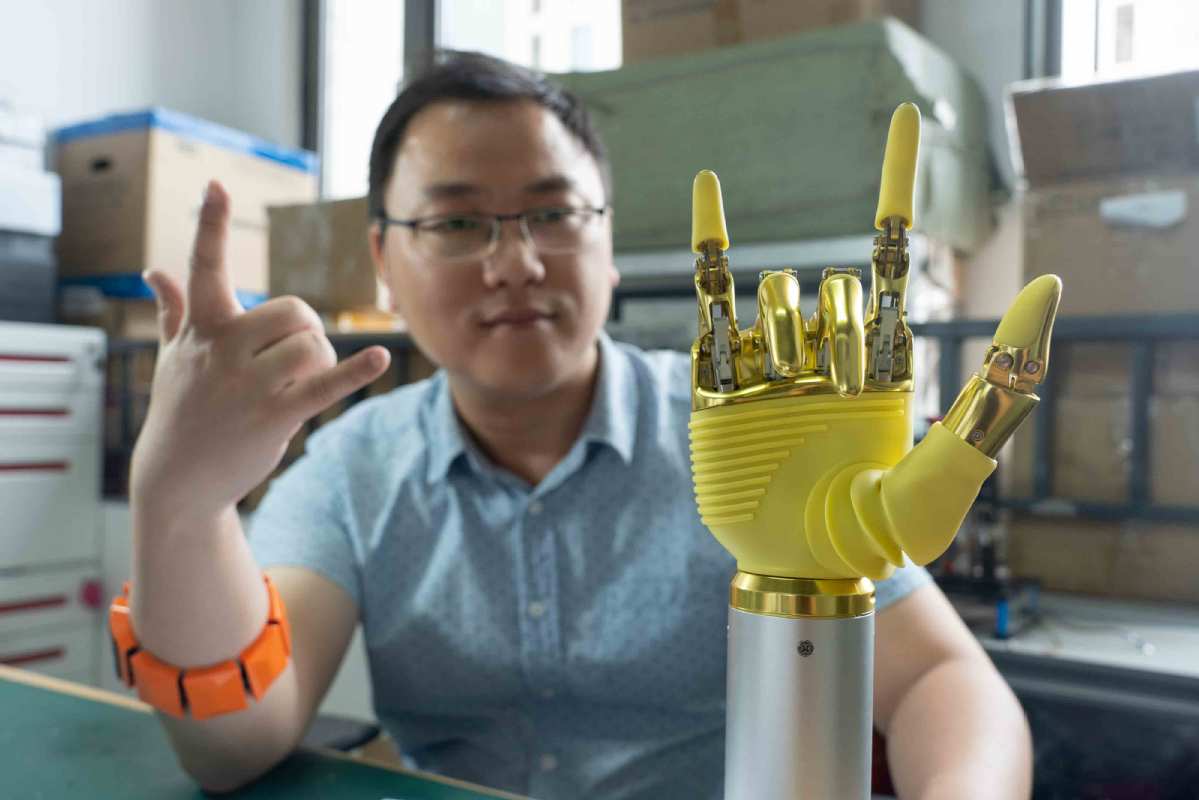 Devices help those who have lost body parts to regain abilities.

Wang Chaofeng lost both hands and forearms in an accident more than 25 years ago when he was fixing a high-voltage wires while serving in the People's Liberation Army Air Force in Jinan, Shandong province.

"In the past two decades, I have gradually accepted the reality and learned to live with it," said Wang, 48. "But I still long to use my hands to do things, just like other people."

He tried artificial limbs, but said they could only perform a simple pincer-like movement. "I looked up some electronically controlled prostheses, but they were all too expensive," he said.

But things changed for Wang last year, when OYMotion Technologies, a Chinese startup, contacted him to take part in testing the company's prototype of a myoelectric artificial arm, an externally powered device controlled by electric signals generated by the user's muscles.

With two sensors embedded in his upper arms along with battery-powered mechanical hands, Wang can control the prothesis to perform more than a dozen different grips.

"I was thrilled the first time I wore the robotic hands," he said. "I just need to think what gesture I want to make, then they will do it for me."

Wang was so happy that he uploaded footage to the short-video platform Douyin that showed him arm wrestling and shaking hands with others using the new prostheses. He received hundreds of likes and inquiries.

"I want more people like me to know that new technologies are here to help us," he said.

With technological advances in robotics and artificial intelligence in recent years, more and more companies in China are eyeing the market for assistive devices and introducing more affordable smart products for people with disabilities.

These include an armband with electrodes to sense muscular impulses. When the wearer first puts the band on an arm, he or she is asked to repeat a series of movements to enable the sensors to gather signals sent by the brain to the limb to perform a particular movement, such as forming a fist and turning the palm over.

Based on the data, the computer will build a customized database for an individual, and then the mechanical hands will perform movements according to what the wearer "thinks" he or she wants to do.

"At first, we just developed the armband, and wanted it to be the next-generation human-machine interactive tool for virtual reality and augmented reality devices, just like the mouse and keyboard for a computer," said Ni, who graduated from Fudan University in Shanghai and worked at several chipmakers in China and Canada before founding the startup.

When Ni demonstrated the armband with a 3D-printed mechanical hand at the Consumer Electronic Show Asia in Shanghai in 2017, many people asked him whether those with disabilities could use it as a prosthesis.

While Ni found that the VR and artificial reality markets were not ready for his products, the public's response at the electronics show made him realize the potential of his product for assistive and rehabilitative devices.

"After surveying the market for three months, I found most assistive products in China were either expensive or lagged behind in technology," he said. "I talked with many people who had lost their limbs, and though few of them wore prostheses, they all wanted to have affordable and useful artificial limbs.

"Myoelectric prostheses produced overseas cost more than 300,000 yuan ($43,620), which is too expensive for most people in China with disabilities," Ni said.

His team spent a year putting his technology into practice, and now his product costs just a quarter of the price charged by foreign brands, such as Ottobock, a German company, and Ossur from Iceland.

"It's the first prosthesis that combines sensors, robotics and artificial intelligence," Ni said, adding that it can "train" itself to respond more accurately to a user's movements.

In addition to myoelectric prostheses, the powered bionic exoskeleton suit is another futuristic device that can help those who have had a stroke or spinal cord injury to get out of a wheelchair and walk.

With sensors installed, the suit can detect how the wearer intends to move, and helps with making strides.

Last year, the company set up a joint laboratory with the University of Melbourne in Australia, and in July formed a partnership with the Shirley Ryan AbilityLab in Chicago, United States.

'Angel' for the blind

Cai Dongyue, 26, was born blind, and as a child needed a companion to help him get around.

"I can still remember that my mom and I transferred by three buses and travelled for three hours to get to a boarding school for blind students every week," he said.

"I can go out walking while using guide sticks, but they only allow me to know my surroundings in a radius of less than 1 meter," Cai said, adding that most blind people have experienced being injured by poles, power lines or other obstacles on the road.

In 2016, Cai, a big fan of electronic and digital products, learned that a company was developing smart glasses that could identify objects.

"I like trying out new stuff, so I went to the company and put the prototype to the test," he said.

Since then, he has taken part in testing what are now referred to as "Angel Eyes", made by NextVPU, a vision-processing chipmaker at Zhangjiang Hi-tech Park, Shanghai.

These glasses have two small cameras that capture images just like the eyes and transfer them to a minicomputer with a visual-recognition program and an image database of more than 3 million pictures. Objects in the images are then identified and played back to the user through a special bone conduction earphone.

"At first, I didn't trust the glasses. All electronics have some glitches, after all," Cai said. "But the more I use them, the more confident I become. They have helped me walk farther on my own."

After several updates and revisions, the glasses were released on to the market in 2017. As more feedback and images have been collected and processed, they can now identify more than 30 types of object for the blind, including other people, doors, stairs and cars.

Cai Haijiao, co-founder of NextVPU, has worked in image-processing technology for more than a decade, has taken part in the Shenzhou manned space program and worked for a robotics company.

He joined his friend, Feng Xinpeng, in founding the company. "Visual-recognition technology has been widely used in autonomous cars and robotics, and we think it can also be applied in assistive devices," Cai Haijiao said. "This market is still a blue ocean."

He added that the chips in the "Angel Eyes" need to be very powerful to process images to ensure that the user receives quick and accurate responses.

"We are still using foreign chips, but they will soon be replaced by our own," he said. "Artificial intelligence chips is our core business."

The company said it has sold several thousand of the glasses, and has recently launched a small text reader that can be attached to the frame of the glasses to read books for the blind.

The China Disabled Persons' Federation estimates that more than 24 million people in the country have limb disabilities, and over 12 million have visual disabilities, accounting for 29 percent and 14 percent respectively of all those with disabilities nationwide.

Fan Yubo, director of the National Research Center for Rehabilitation Technical Aids, said at a conference in July, "China has the largest population that demands assistive and rehabilitation aid devices, and there is great potential in this market."

In recent years, domestic innovation has been pushed in this market.

In 2016, a guideline on developing the rehabilitation and assistive device market published by the State Council stated that China aimed to grow this industry by channeling more funds and providing more tax reductions. It estimated that the market would reach 700 billion yuan by next year.