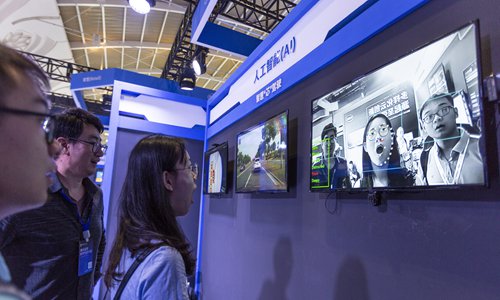 China's government departments have cooperated with enterprises to apply cross-age face recognition technology to search missing persons, helping abducted children get back to their parents.

The police found five abducted children in Shenzhen, South China's Guangdong Province in April and May. One of them was abducted 19 years ago, the Beijing News reported on September 9.

For many years, the police have been looking for the child, and worked out portraits of the missing child by simulating changes in his appearance over the years.

The boy was reunited with his parents on June 19, after 19 years. He is now working as a chef at a restaurant in Shenzhen.

Facial recognition technology across age groups is believed to be able to help police officers narrow down searches. Tencent YouTu Lab created a cross-age face recognition technology, with the support of tech giant Tencent's massive data stores. The technology is aimed at solving child abduction cases. To fully master the natural facial age-changing law from the data, the lab created a learning strategy to make cross-age recognition more reliable and accurate, according to the Xinhua News Agency on May 4.

As of May 15, the TuanYuan, or "Reunion," system has posted information on 3,978 missing children, with 3,901 of them found, a success rate of 98 percent, according to Xinhua, citing data from the Ministry of Public Security (MPS). The platform was launched on May 15, 2016.

At the end of 2017, the police department in Sichuan Province proposed testing the technological combination of AI and cross-age facial recognition in missing children cases in the province.

In 2018, the Ministry of Civil Affairs developed a network to look for missing relatives using facial recognition functions. Once a photo is uploaded, the search system can run through 2,000 stations' databases.

News aggregator Jinri Toutiao rolled out the new facial recognition function to find missing people on the platform at the end of 2018, the Beijing News reported.

In 2019, the cross-age facial recognition technology identified seven out of 10 missing children. Shenzhen Police have used the technology to recover five abducted children since April.

Chen Jianfeng, director of the criminal investigation bureau under the MPS, believes that cross-age face recognition technology narrows the search scope from hundreds of thousands down to the hundreds, which greatly cuts down investigation work loads, the Beijing News report said.

Chen said the application of the technology is still in its infancy, and more work is needed before it can be used nationwide.

However, AI is just a tool used to identify missing children, and DNA comparisons are needed for final confirmation.

The year of 2017 witnessed rapid development in AI, when facial recognition was used by the police.

Based on one photo, one of more faces that look highly similar can be generated from the database.

Huang Rongcheng, a policeman with Ziyang Public Security Bureau, Sichuan Province, told the Beijing News that he has worked on 10 missing children's cases.

Based on the experiences he has gained in the past 13 years, Huang said that the police also collect information of the parents who are looking for missing children. Their DNA is recorded in a database, so that a follow-up can be implemented once any lead is found.

In general, the past 10 years' efforts have fundamentally contained the trafficking of women and children in China, Chen said.

Awareness of anti-abduction efforts has also been enhanced among Chinese people, Chen was quoted as saying in the Beijing News report.