AI to accelerate with global perspective 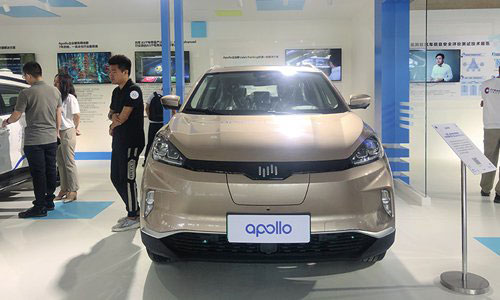 A car that runs Baidu's autonomous driving Platform Apollo is on exhibition at the site of Baidu Create 2019 on Wednesday in Beijing. (Photo: Global Times)

China is set to accelerate the development of artificial intelligence (AI) with a global and forward-thinking perspective, a domestic technology industry leader said.

Li stated that China needs to work faster to develop the new generation of AI backed up with strong research and development capability.

"China will become the origin of new technologies, but it will drive more innovation to influence and benefit the world and humanity," Li said in the article.

Li's article is intended to further encourage and boost the new industry and call for more attention to its development and related regulations, an analyst told the Global Times on condition of anonymity.

In recent years, China has been gaining increasing global impact and recognition in the development of AI. A total of 74,000 papers were published involving AI from 2013 to 2018, accounting for more than 24 percent of global output.

China ranks second in the world in terms of the number of enterprises and funding scale, according to the China New Generation Artificial Intelligence Development Report published by the Ministry of Science and Technology.

The fast growth of the AI sector in China is attributable to policies and government support, as well as a large market, according to Zhou Minfeng, a senior analyst from the Beijing-based consultancy iResearch.

According to the report by the Ministry of Science and Technology, 19 provinces in China have formulated 26 AI-related policies and strategies. More than 30 universities in China have established AI departments and schools, encompassing 89 AI-related courses.

"China also has one of the fastest-growing middle-class groups, which offers huge potential demand in the market," Zhou said.

Zhou noted that compared with government support, regulations are still lacking. In terms of research and development capacity, China is still lagging behind some of the leading countries in the world.

"Although globally, China leads in funding and software development ... China is still a large importer of core hardware, such as AI chipsets," Zhou said.