Chinese internet giant Alibaba on Tuesday unveiled its new chip for cloud computing, the company's latest breakthrough in the core technology sector amid the nation's push for technology self-reliance. 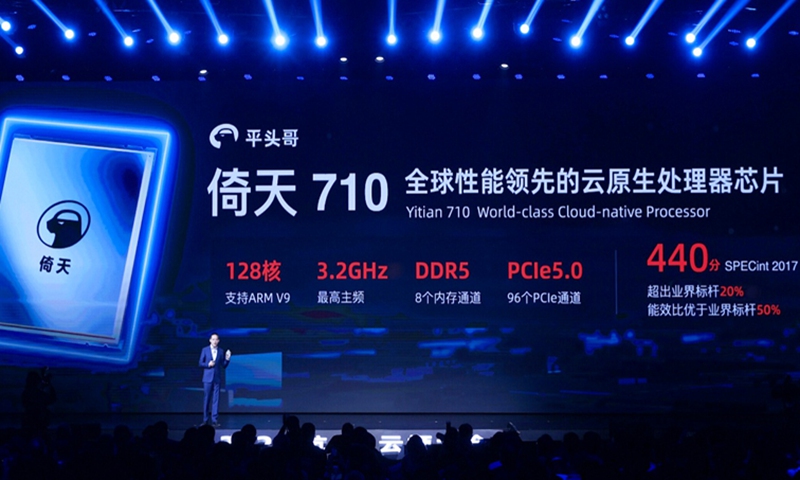 The chipset launch will help boost the company's cloud computing business, in which it already has the largest domestic market share, while catching up with global players like Amazon and Microsoft, analysts said.

Developed by Alibaba's in-house semiconductor unit Pingtouge, the chip, named Yitian 710, is based on architecture from UK-based ARM. As the most powerful ARM-based server chip, its performance exceeds the industry benchmark by 20 percent, the company said.

But the chip will not be commercially available as it will be mainly used for in-house business.

Jeff Zhang, president of Alibaba Cloud Intelligence, said in a press release that "we will continue to maintain close cooperation with partners such as Intel, Nvidia, AMD, ARM, etc. to provide customers with more choices."

A source close to the research and development (R&D) team told the Global Times on Tuesday on condition of anonymity that Yitian 710 is likely to be tested in several cloud servers during the coming Double 11 shopping festival, when data flow reaches the year's peak.

The source said that it might still take three to five years for the mass deployment of Yitian.

In terms of chipsets, Alibaba Cloud has overtaken Microsoft, the person said, yet it's still behind Amazon Web Services (AWS), the world's broadly adopted cloud platform.

AWS is expected to release its new cloud chip in November.

In terms of global market share, Alibaba is No.3, trailing Amazon and Microsoft, according to research firm Gartner.

Chinese technology companies from phone producer Xiaomi to internet giants like the BAT trio (Baidu, Alibaba and Tencent) have recently doubled investment on R&D in the semiconductor sector, as China endeavors to bolster domestic technologies amid tensions with the US.

Chinese companies' push for chip development also comes amid the US' relentless crackdown on Chinese firms in the sector. 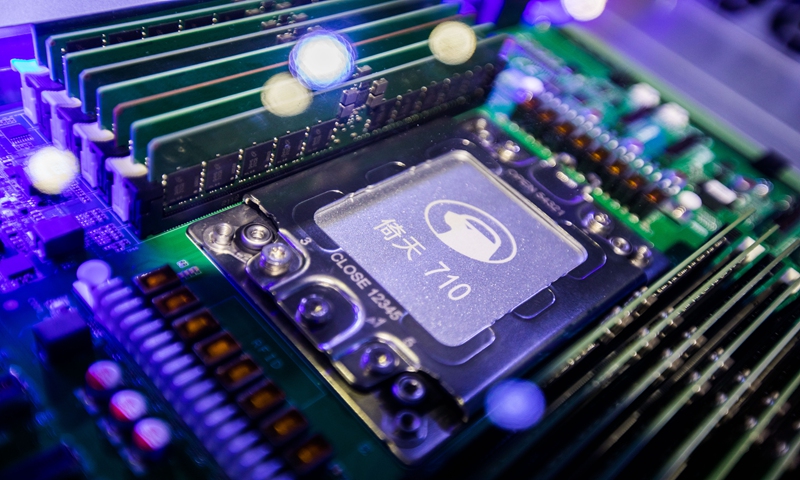 Alibaba's resources are still focused on chip design, and the scale is not large at present, so the US may not target the company in the short term, Xiang Ligang, director-general of the Beijing-based Information Consumption Alliance, told the Global Times on Tuesday.

Xiang noted that the presence of major domestic giants in the semiconductor industry is still at the primary stage as it accumulates talents and experience, so it will take time to see breakthroughs.

"It might be easier in the design part, while making any progress in the chipmaking sector would be quite difficult," Xiang said, predicting that 2023 might be a "fruitful year" for the domestic chip industry.

Yitian 710 is not Alibaba's first move into the chip sector. In 2019, it released its first core processor, IP Xuantie 910, and the artificial intelligence chip Hanguang 800.