TECH Animals can reinfect humans; control measures must be expanded to pets: virologist

Animals can reinfect humans; control measures must be expanded to pets: virologist 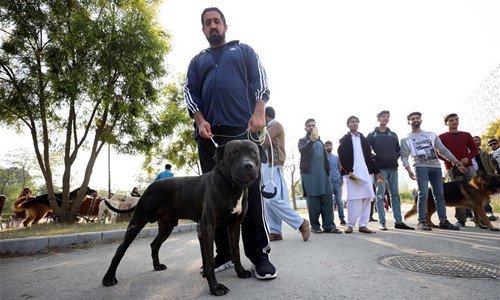 A man poses with his dog during All Breed Dog Show in Islamabad, capital of Pakistan, on Dec. 2, 2018. (Photo: Xinhua)

The discovery that a tiger in a New York zoo has tested positive and showed COVID-19 symptoms has raised concerns over the risks of such animals becoming sources of human infections, and a Chinese virologist noted that while people should pay attention to pets of patients, there is no need to panic about animals in general.

The tiger, Nadia, and three African lions have developed dry coughs and reduced appetite, but are expected to recover. They are likely to have contracted the virus from a caretaker who was confirmed with the novel coronavirus, media reported.

Since the animals are showing symptoms, they are actually considered to be infected with the virus rather than contaminated by a human being. These animals can reinfect human beings as virus carriers, analysts said, making a distinction between the tiger and earlier reports of pets of COVID-19 patients testing positive for the virus.

"Positive testing alone doesn't mean infection, as the animal could have had contact with the virus emitted by a human but was not really sickened," Yang Zhanqiu, a Wuhan-based virologist, told the Global Times on Monday.

Yang noted the finding reinforced earlier knowledge that animals can become infected with COVID-19 through human beings. Since the virus came from humans, it can in turn reinfect humans, but the infectiousness requires more studies.

An earlier study by Chinese researchers published in bioRxiv investigated 141 cat serum samples collected from COVID-19 patients and close contacts, and found that roughly 10 percent showed positive for COVID-19 antibodies. However, the cats tested negative for the novel coronavirus and did not develop symptoms.

There have also been media reports of cases where pet dogs of COVID-19 patients tested positive for the virus in Hong Kong.

The study and news reports sparked widespread concerns that the coronavirus could spread among cats and dogs and infect human beings, but Yang stressed that the existence of human-to-animal transmission doesn't mean the virus can be transmitted among animals.

"It is unlikely that your dog can contract the virus by playing with another dog whose owner turned out to be a virus carrier and infected his or her pet. But it would be extra safe to disinfect their paws and fur if they are exposed to the virus, as animals could infect human beings in the same way as a doorknob that has just been touched by a COVID-19 patient," Yang said.

Since animals can become infected and can continue infecting, "we should also pay attention to pets of COVID-19 patients, suspected cases and close contacts, and quarantine the animals if necessary," he said. "Otherwise the pets could infect other family members even though the patient is already hospitalized."

"It is necessary to count a pet as a family member when implementing quarantine and medical observation rules," Yang said.

But Yang stressed it's unnecessary to panic or abandon cats and dogs for fear of them becoming sources of possible infection. "If a healthy person's pet has had contact with a COVID-19 patient, in most cases the owner has already encountered the patient, since a pet cannot walk around on its own."