Apple has again pulled a large number of apps from its well-known app store in China. Analysts noted that the company is increasingly intolerant of violations of its own regulations and Chinese laws, as its charm among Chinese consumers wanes. 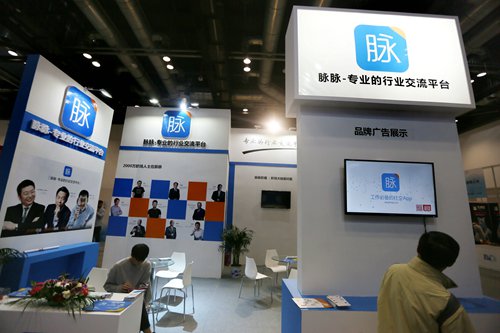 A man reads the introduction for Maimai, a Chinese career and social-networking platform, by its exhibition stand. (File photo: VCG)

Maimai claimed that the iOS version of its app is being updated to meet the store's technical requirements, according to an online company statement.

A Yinyu spokesperson said that its platform previously had a bug.

As for Hello, its representatives said the company is in talks with Apple, according to media reports.

"Apple is increasingly intolerant of breaches of its payment regulations, because the iPhone's market share in China is falling," Zhang Yi, CEO of iiMedia Research Institute, told the Global Times on Wednesday.

In November 2018, Apple's app store pulled more than 10,000 apps a day, the Economic Daily reported the same month. In addition to its business interests, another motivation for the company was to prevent apps from avoiding Apple's vetting system regarding publishing illegal or unregulated content, analysts said.

Analysts agreed that doing business by complying with local laws and regulations should be encouraged and strengthened. However, they said that the uniform 30 percent commission collected by Apple is not in the interest of the company in the future.

"Although the Apple store is a 'must-take route' for apps in China at the moment, the iPhone is losing favor with Chinese consumers.

So it's not such a good long-term strategy to stick with such high fees for all apps," said Liu Dingding, a Beijing-based industry analyst.