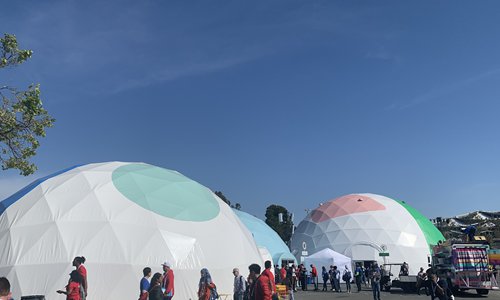 Main: Visitors walk across the grounds of Google I/O conference in California on June 11, 2-19. (Photo: IC)

US search engine giant Google has appointed Chen Junting (Stanley Chen) as its managing director of Greater China, in charge of sales and operations, a move that signals the US tech giant attaches rising importance to the Chinese market in spite of the ongoing US-led tech cold war, industry analysts said. Chen, who has been general manger of Google's office in the Taiwan region for the last eight years, has experiences in global tech companies including Apple, Ericsson and Intel, according to his LinkedIn profile. "He will be based in Shanghai," after the appointment, a Google spokesperson told the Global Times on Monday. US tech giants including Google and Intel have been under tremendous pressure lately, because the Trump administration has imposed sanctions on Chinese tech firm Huawei. The sanction bars US firms from supplying Huawei. "The appointment shows that Google could never give up the Chinese mainland's market, and it attaches a great importance to the largest internet market across the world," Liu Dingding, a Beijing-based veteran industry analyst, told the Global Times on Monday. Google pulled its search engine services from the Chinese mainland in 2010 due to disagreements over industry regulations. Although Google's search engine - a major business - is inaccessible in the mainland, its Greater China revenue grew over 60 percent last year to $3 billion, which also prompted the firm to expand its ad sales team in the region, according to media reports. No tech firm can afford to leave the Chinese market, which has become the most promising place for innovation and technological advancement, Liu noted. "Appointing someone with a deep background in global tech firms that have been cooperating with the market for many years will help Google to grow in the mainland," he said. In an interview with CNN, Sundar Pichai, the CEO of Google said the company is not actively working on a new Chinese search engine and has no plans to consider relaunching their search engine in the mainland, CNN reported Sunday. "To admit it or not, with or without a search engine, Google has already had many footprints in the mainland and it values it deeply," Liu said.