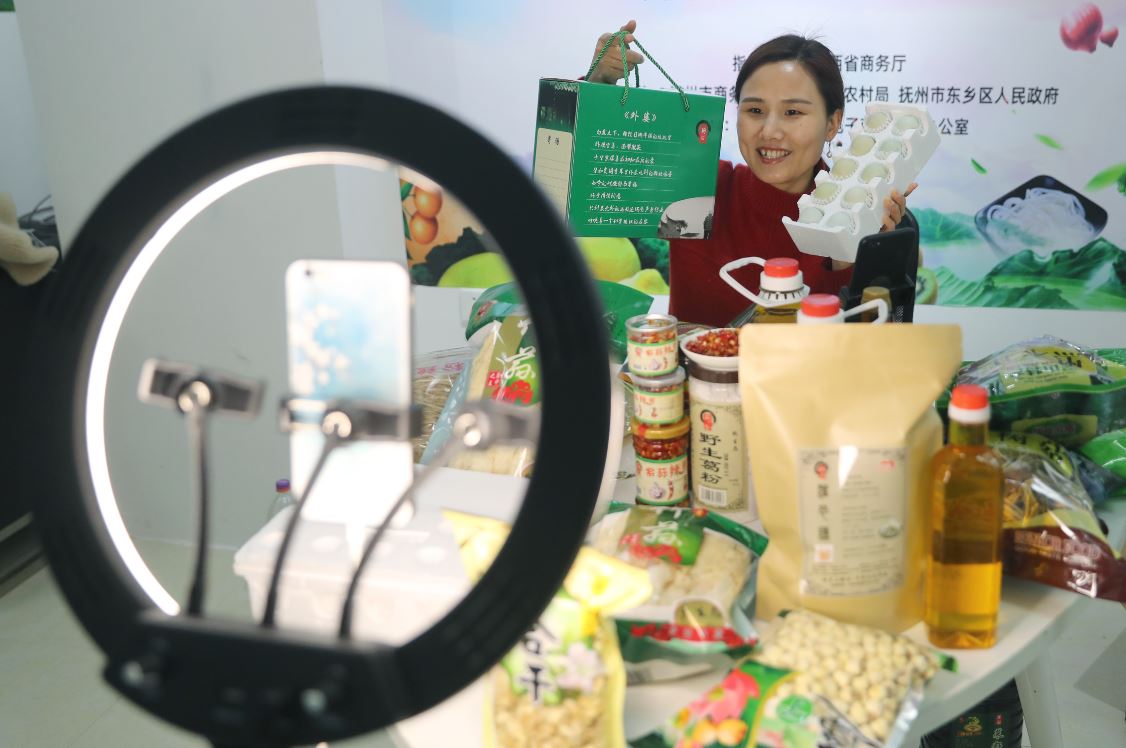 An employee of an internet firm promotes local agricultural products online, using no more than a smartphone for livestreaming. (Photo: China Daily)

Singing, learning to cook and fresh food sales have been hugely popular during confinement

After being confined indoors for about three weeks due to the ongoing novel coronavirus outbreak, Wang Xin, a 32-year-old editor from a financial magazine, found her cooking skills have improved by leaps and bounds.

Wang used to eat in the office, order takeouts or dine out with friends. She seldom cooked at home on workdays.

"However, I have needed to change my lifestyle, since I have to stay home and work remotely due to the epidemic. I check out online recipes and spend much time studying cooking these days."

She downloaded a popular recipe-sharing app called Xiachufang and cooks three meals per day. "I can make dumplings, green onion pie, curry chicken rice and soybean pork bone soup with the help of the app. I am now focusing on improving my baking skills."

In her point of view, cooking brings her great joy and helps ease anxiety amid the outbreak. In the past, Wang also liked to join a group of friends to sing and drink in a bar or go to mini "KTV" karaoke bars on weekends, but now she can sing along with Changba, a mobile karaoke app.

Just like Wang, many Chinese people, who are staying indoors to avoid infection and trying to relieve boredom, are taking this opportunity to learn how to cook and are seeking new forms of entertainment to enrich their daily lives amid the COVID-19 outbreak.

A slew of applications, such as an online recipe-sharing community and a mobile karaoke app, as well as online fresh food sales, are gaining traction due to the epidemic.

Xiachufang founder Wang Xusheng said data flow from new users grew 10 to 20 percent daily during the Lunar New Year holiday, and the company has expanded the capacity of its servers due to the influx of a large number of users.

The app also provides paid knowledge services related to cooking and the online marketplace, showing different baking ingredients and where to buy them.

"We hope to help those eating at home eat better," he said. "We found people like baking during the epidemic. They take out the electric oven that hasn't been used for a long period of time and bake bread and cakes together with their family members."

He added that users are also willing to upload photos of food they made to the platform and share their feelings about cooking. "A group of users can feel the happiness in the process of cooking."

Statistics from consultancy Analysys Qianfan showed the monthly active users of Xiachufang reached 13.74 million in December. The number rose to 14.79 million as of January, up 7.7 percent month-on-month.

Moreover, Ecook, a mobile app that gives food lovers access to online recipes from the best cookbooks, has seen a surge in demand.

Zhang Yi, an analyst from market research company iiMedia Research, said, "People have the desire and time to cook some delicious food, since they are trapped at home, but their passion will fade away gradually when the epidemic ends."

He said more innovative operation methods in terms of technology, content, products and services should be adopted to retain these users. "It is noteworthy that the epidemic has attracted new groups of consumers, such as elderly people, who originally didn't belong to target user groups."

Changba, which literally translates into Singing Bar, provides an online platform for music fans and allows users to share their performances with friends.

"People are more willing to use mobile karaoke applications during the epidemic period, and our users' growth rate, retention rate and activity level surged dramatically," said Chen Hua, founder and CEO of Changba.

Chen added that Changba fans generally range in age from 20 to 30 years old. "We found that youths under 20 swarmed into our app amid the outbreak, and older users have come back. In addition, they tend to spend more time on mobile karaoke apps, and their frequency of use each day is also rising."