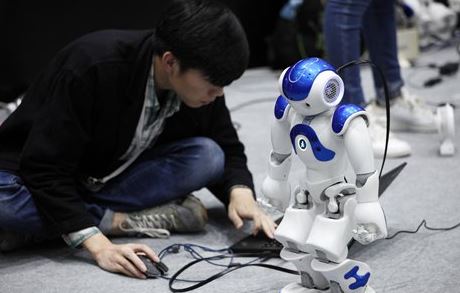 Artificial intelligence (AI) is driving the next wave of changes in technology. This year's high school graduates should bear these changes in mind when deciding on college majors, while faster and bolder moves should be made in education reform, experts said. Aim highWang Shirui, 18, a graduate from Guandaoju Middle School in Langfang, North China's Hebei Province, is optimistic about AI.In his college entrance examination, or gaokao, Wang scored 640 out of 750, ranking in the top 8 percent in the province. He told the Global Times that AI could create value for his generation and more progress will be made in research and development. In 2018, it took 705 points to be admitted into the automation major in Tsinghua University for students from Hebei. "People have already benefitted from AI. Take stockbrokers for instance, AI can avoid errors in operation. Our generation might have a chance to see AI replace all the blue collar jobs," Wang said. He said that he also sees a potentially huge market for AI along with the Belt and Road Initiative. "My dream is to grow into another company owner like Ren Zhengfei, the boss of Huawei," he said. However, Wang's score is still not enough to be enrolled into an AI major in top-tier universities.To achieve his dream, Wang has decided to beef up his abilities in mathematics, computer skills and technological knowledge, fields that are basic knowledge for AI, so he applied to major in Web engineering and telecommunications engineering course in Beijing Jiaotong Univserity.New ModelIn April 2018, China's Ministry of Education (MOE) launched a plan for the next generation of AI to shape the new STEM subjects, so that majors will become more consolidated, leading to an AI plus model in education. According to the plan, by 2020, China aims to create 100 different majors in the AI plus domain, with the establishment of 50 AI institutes, research institutes or research centers. In March, a number of new majors were approved in universities across China, including 196 for data science and big data, 101 for robot engineering, and 96 for intelligent science and technology, according to the MOE. Lu Feng, an analyst at Beijing-based consultancy firm CCID Consulting under China's Ministry of Industry and Information Technology, told the Global Times that in the US and the UK, where AI has been developed for years, most universities have established major research centers."In China, courses on AI are scattered among majors for computing, automation, software engineering and telecommunication," Lu said. Lu believes that universities need to increase the enrollment quotas for AI students, raise education funding, and strengthen the infrastructure for AI research.The rate at which workers in China's urban labor market will be replaced by AI technology is estimated to be 45 percent, according to a research conducted by Zhao Zhong, a professor with the National Academy of Development and Strategy, Renmin University of China in April 2018. More research is needed to learn about AI's impact in the job market, and reforms in education are needed while planning the industry landscape based on national conditions, Zhao told the Global Times.Accelerated reform Many universities in China have begun setting up institutes for AI, paying more attention to fostering AI talents and striving to offer better facilities. In July 2018, Turing Award winner Whitfield Diffie joined Zhejiang University as a full-time professor. A Turing program, led by Diffie, plans to admit about 60 students to Zhejiang University this year under three courses: computer science, AI and information security. Zhang Fan, a deputy dean of Chu Kochen Honors College, Zhejiang University, told the Global Times that the Turing program will be integrated into the college's Belt and Road international communication strategy, which includes research, volunteer projects and cultural exchanges. Lu suggested establishing non-profit AI industrial innovation centers for global, substantive, and large-scale development.  "Researchers should be encouraged to exchange and relocate between universities and enterprises. Educators should also be encouraged to work on their own business through innovation, so that AI research results will be translated into industrialization," Lu said.