TECH Astronauts preparing for another spacewalk

Astronauts preparing for another spacewalk

Chinese astronauts on board the core module of the Tiangong space station are preparing for the next extravehicular activity, or spacewalk, according to a mission insider. 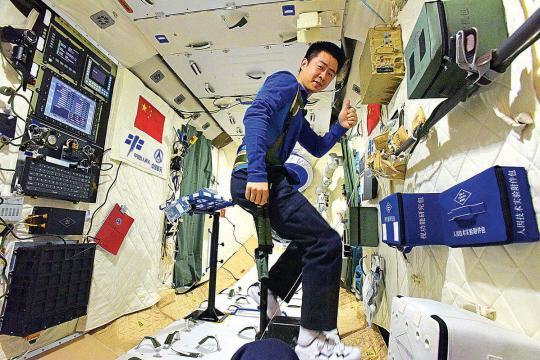 "They have carried out a host of scientific experiments, technological tests and engineering tasks in accordance with mission schedules," a mission controller at the Beijing Aerospace Control Center told China Daily on Thursday. "Among their assignments, an important one requires them to use apparatus to monitor and record a long-term space mission's impact on their bodies. Currently, they are making ready for the next spacewalk, which will take place soon."

The specialist, who wished not to be named, said that besides conducting predetermined operations, the three crew members of the Shenzhou XII mission－Major General Nie Haisheng, the mission commander, Major General Liu Boming and Senior Colonel Tang Hongbo－also spend time on physical exercises.

"During their rest time, the astronauts can do whatever they like, such as reading books or watching movies on their personal devices. Moreover, thanks to our strong data relay capability, it is technically feasible for ground control to transmit live-broadcast TV signals to the spacecraft to enable them to watch the Olympic Games," he said.

In early July, the Shenzhou XII crew performed China's first extravehicular activity in 13 years, staying outside the space station for about seven hours.

During the spacewalk, Liu and Tang, wearing the nation's new-generation extravehicular suit, floated out of the station's core module, named Tianhe, or Harmony of Heavens, and then conducted several sophisticated maneuvers, such as testing a large robotic arm, installing equipment outside the spacecraft and adjusting the external panoramic camera.

Liu stood on, and moved with, the robotic arm for hours. Tang, in addition to assisting Liu and fulfilling his own assignments, also practiced the procedures for an emergency return into Tianhe.

Through the spacewalk, the astronauts verified the reliability and capability of hardware involved in extravehicular operation, demonstrated their adaptability and ability to work with the robotic arm, and examined the performance of their spacesuits. The operation laid a crucial foundation for subsequent spacewalks, according to the China Manned Space Agency.

Before this operation, Chinese astronauts had conducted only one other spacewalk, by Liu and Zhai Zhigang during the three-day Shenzhou VII mission in September 2008.

During the operation, Zhai stayed out of the spacecraft for about 15 minutes, while Liu moved the upper half of his body out of the craft for several minutes to assist him.

As of Friday morning, the Shenzhou XII crew had flown with Tianhe－the first and central component of the Chinese space station, called Tiangong, or Heavenly Palace－for 50 days. They are scheduled to remain in space until mid-September, when they will return to Earth.

The Shenzhou XII mission, China's seventh manned spaceflight, is part of the Tiangong program, which aims to complete a three-component space station in a low-Earth orbit before the end of 2022.