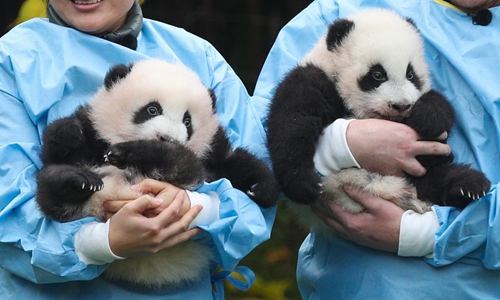 Scientists from several universities and institutes in Southwest China's Sichuan Province are using new audio- and artificial intellectual (AI)-backed methods to predict when a giant panda is most fertile during their breeding season to improve the chances of mating success.

There is only one day a year that is a "best chance" for giant pandas to breed, and that's when the normally "silent animals" become more vocal, scientists said. The research team includes members from Sichuan University, the Chengdu Research Base of Giant Panda Breeding, Sichuan Key Laboratory of Conservation Biology for Endangered Wildlife and the Sichuan Academy of Giant Panda.

When combined with previously collected data, the researchers' new system can automatically determine when a female giant panda is most fertile and when mating has the best chance to being successful.

Based on the prediction results, giant panda keepers can take appropriate actions to proceed with fertilization, scientists said.

The team plans to expand their study to include both acoustic and visual data.

A census conducted in November 2019 showed there were 600 pandas in captivity and 1,864 in the wild. Giant panda's difficulties in procreating and their poor survival rate of cubs are considered the contributing factors of their previously declining numbers.

Habitat protection and reproduction efforts in recent years have led to the giant panda being removed from the endangered species list, reports said.

After decades of protection efforts, Giant pandas were listed as a "vulnerable" rather than "endangered" species by the International Union for Conservation of Nature in September 2019.