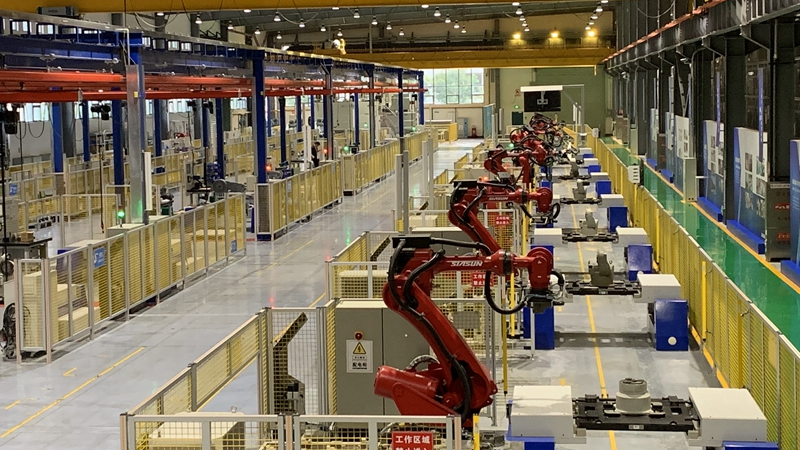 In Siasun's Shenyang factory, robots are being built by robots. (Photo: CGTN)

How to build a robot? Siasun's answer is: with another robot.

Shenyang's Siasun Robot & Automation Company is now the leading company in the field of robotics.

One can hardly spot a factory worker in the company's factory in the southern suburb of China's northeastern city of Shenyang. In the highly automated plant, which also seems to be from a science fiction novel or movie, most of the operations are being handled by robots.

"Innovation is the key to growth nowadays," said Vice President of the company Zhang Jin, noting that this growth is "both institutional and technological."

The company produces a wide range of robots that can be used in manufacturing, harbor operations, and medical care sectors.

"These robots can offer industrial upgrade and boost efficiency in many sectors," added Zhang.

Shenyang is the capital city of Liaoning Province, in China's vast northeast region and often referred to as China's rust belt. Once a solid base for China's heavy industry, 60% of the steel in China was produced in Liaoning province in the heyday of the planned economy. But as the nation's economy transformed, the mega State-owned Enterprise (SOE) driven economy in the province almost slowed to a standstill. Many factories were shut down, and employees were laid off.

The province's officials believe innovation is the key to transform the province and revitalize its economy.

"Innovation is essential to lure in more investment. We must keep up the drive for innovation to rejuvenate the province," said Song Yanlin, Director General of the Department of Commerce of the province.

Siasun's robots are already at work in some of the factories in the area. The robotic arms are used in BMW's mega plant in Shenyang. The plant is BMW's only powertrain assembly outside Europe and has a production capability of 400 thousand cars per year. A new factory under which construction is going to add another 400 thousand cars per year to the company capability. BMW said automation has greatly boosted their efficiency and greatly improved the working condition of its employees.

Like many other parts of China, Liaoning still has to brace for the downward pressure of the economy. But the province's officials are confident that technological and institutional innovation will revive the economy.