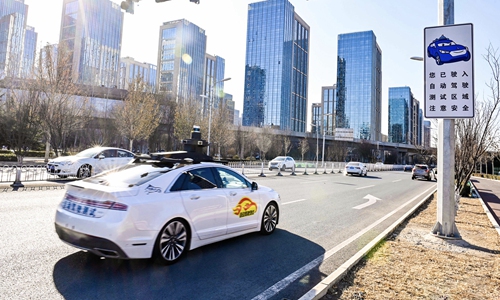 The city of Beijing released its first official report on autonomous driving road tests on Monday, in which China's technology giant Baidu topped the list with the largest number of vehicles and longest test lengths in 2019.

Experts said that China has been actively promoting the development of autonomous driving technologies, and they said that 2020 will be the first year to start usage of Level 3 autonomous vehicles in China - conditional automation - which means that vehicles are capable of driving themselves under ideal conditions and with limitations, but they still need a driver.

As a frontrunner in China in researching and developing autonomous driving technologies, the Baidu Apollo autonomous driving systems covered 754,000 kilometers of newly accelerated testing length with its 52 vehicles in 2019, read a statement sent to the Global Times by the company on Tuesday.

According to Beijing's report, which is also China's first official report on autonomous driving tests, a total of 77 vehicles from different producers had done such tests as of the end of last year. In 2019, the total test length in China reached 886,600 kilometers, surging 577 percent over the previous year.

Now with the first report being issued, it would be a stimulus for the domestic market to accelerate related development and push forward autonomous driving from test areas to real roads, Mei Songlin, a senior auto industry analyst based in Shanghai, told the Global Times on Tuesday.

China's rapid development in 5G technology will also accelerate the improvement of autonomous driving which, in turn, provides a proper application scenario for 5G this year, Mei noted.

Speaking of the development of automatic pilots worldwide, experts said that the US has also been a frontrunner in the area and made great achievements by different paths, such as those taken by Tesla and Alphabet's Waymo.

China, as one of the largest markets for NEVs, has a solid foundation to attract producers from both home and overseas to invest in research and development into autonomous driving. Together with cost advantages, autonomous driving will have rosy prospects in China, Mei said.

Waymo on Monday announced its first external round of funding, $2.25 billion, led by Silver Lake, the Canada Pension Plan Investment Board, and Mubadala Investment Co. The Waymo Driver has driven 32 million kilometers on public roads across more than 25 cities, read the company's online statement.