China sent a new satellite from its BeiDou Navigation Satellite System (BDS) into space on Saturday night in its first BDS launch of 2019, which developers and experts say will improve services to high-latitude and Asia-Pacific regions.

The satellite was launched on a Long March-3B carrier rocket from the Xichang Satellite Launch Center in Southwest China's Sichuan Province at 10:41 pm. 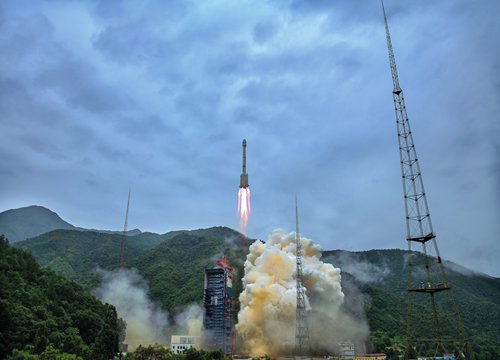 Yang Changfeng, chief designer of the BDS, said that the hybrid constellation design, in which three groups of satellites, the IGSO, MEO and GEO at different orbital regimes work in concert, was an exclusive BDS innovation and the world's first.

The IGSO satellite is different from geosynchronous Earth orbit satellites as the latter are stationary with the Earth at the equator, while IGSO-1 moves between the northern and southern hemispheres, Jiao Weixin, a space science professor at Peking University, explained on Sunday.

The BDS' worldwide positioning accuracy is 10 meters, and in the Asia-Pacific region it reaches 5 meters, according to a press conference on the project held in December 2018.

IGSO-1 will increase the number of visible satellites in the Asia-Pacific region, providing better services for the region, Yang said.

The Saturday launch is the first on the BDS 2019 launch schedule, which will see eight to 10 satellites being sent into space and networked.

BDS-3 started global services in November 2018. China will launch six MEO satellites, three IGSO satellites and two GEO satellites from 2019 to provide better services to the entire world with a comprehensive constellation in place by 2020.

Having sold more than 70 million chips and modules, BDS has achieved large-scale application domestically in many sectors, such as transportation, agriculture, public security, surveying and mapping.

Although China developed and operated BDS independently, it welcomes international customers to make the most of the system, Jiao said.

It has already been applied to precision farming in Myanmar, the logistics industry in Thailand, construction in Kuwait and topographic mapping in Uganda, Xinhua said.

The Saturday launch is also the 100th mission for the Long March-3A series carrier rockets, which comprise Long March-3A, -3B and -3C rockets. The series has contributed greatly to China's high-orbit launches including the BDS and the lunar probe Chang'e project.