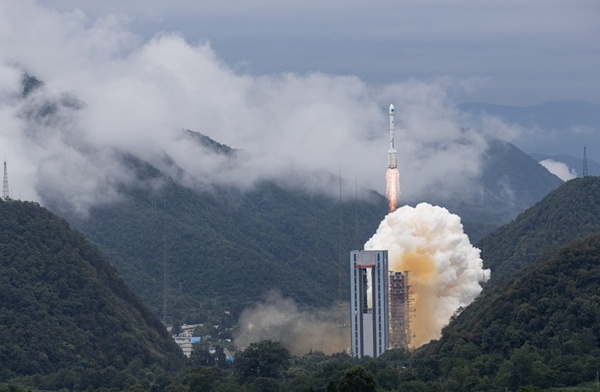 China's self-developed Beidou navigation tech is eyeing fast development in industrial applications as it continues to expand its presence globally, according to experts at an industrial conference.

The value of industries related to the BeiDou Navigation Satellite System (BDS) has seen an annual average growth of more than 20 percent over the last decade and topped over 400 billion yuan (62.14 billion U.S. dollars) last year, data by the China Satellite Navigation Conference (CSNC) showed.

Yang Jun, deputy director of China's Satellite Navigation System Management Office, said the figure is estimated to exceed 1 trillion yuan by 2025. Yang was speaking at CSNC held from May 26 to 28 in Nanchang, east China's Jiangxi province.

China officially commissioned BDS on July 31, 2020, opening the new BDS-3 system to global users. It is now operating alongside three other systems: GPS of the United States; Galileo of the European Union; and GLONASS of Russia.

The system, which offers positioning, navigation, and timing services, among others, has applications in various fields such as transportation, disaster relief and mitigation, agriculture, and forestry, experts at the CSNC noted.

Xiong Lei, who heads the technology department of Nanchang Public Transport Group, said the company will finish installing and upgrading BDS terminals on 1,000 buses in the provincial capital.

"With the high-precision positioning, we can more accurately gain the operation mileage statistics and know the real-time position of the vehicles," Xiong said.

Jiang Chunsheng, vice president of CHC Navigation, said the company has developed a new pervasive sensor equipped with Beidou technology that is changing the traditional ways of disaster monitoring.

"It provides more accurate location and time information to work out the speed and acceleration of a landslide. The additional data can allow for more precise judgment," Jiang said.

To date, more than 7 million commercial vehicles, about 36,300 postal and delivery vehicles, and 350 aircraft in China have been equipped with BDS, according to data released at CSNC.

BDS has also empowered the self-driving system of more than 45,000 pieces of agricultural machinery nationwide, helping slash human effort in the sector.

Analysts noted BDS-related industries are eyeing new opportunities this year, as it has been listed in China's 14th Five-Year Plan (2021-2025) for national economic and social development and the long-range objectives through the year 2035.

So far, over 100 million homegrown Beidou chips and modules have been sold, Yang said, adding that China has developed a complete and independent Beidou industry development chain.

"The BDS is also expanding its global presence. So far, it has been used in over 120 countries and regions," said He Yubin, Chairman of China Satellite Navigation System Committee.

Currently, the technology has been applied in land mapping, precision agriculture, and smart ports in regions including ASEAN, South Asia, Eastern Europe, West Asia, and Africa.

"We will continue to make Chinese contribution to the world and promote the prosperity, coexistence and competitive development of the global satellite navigation industry," He said.