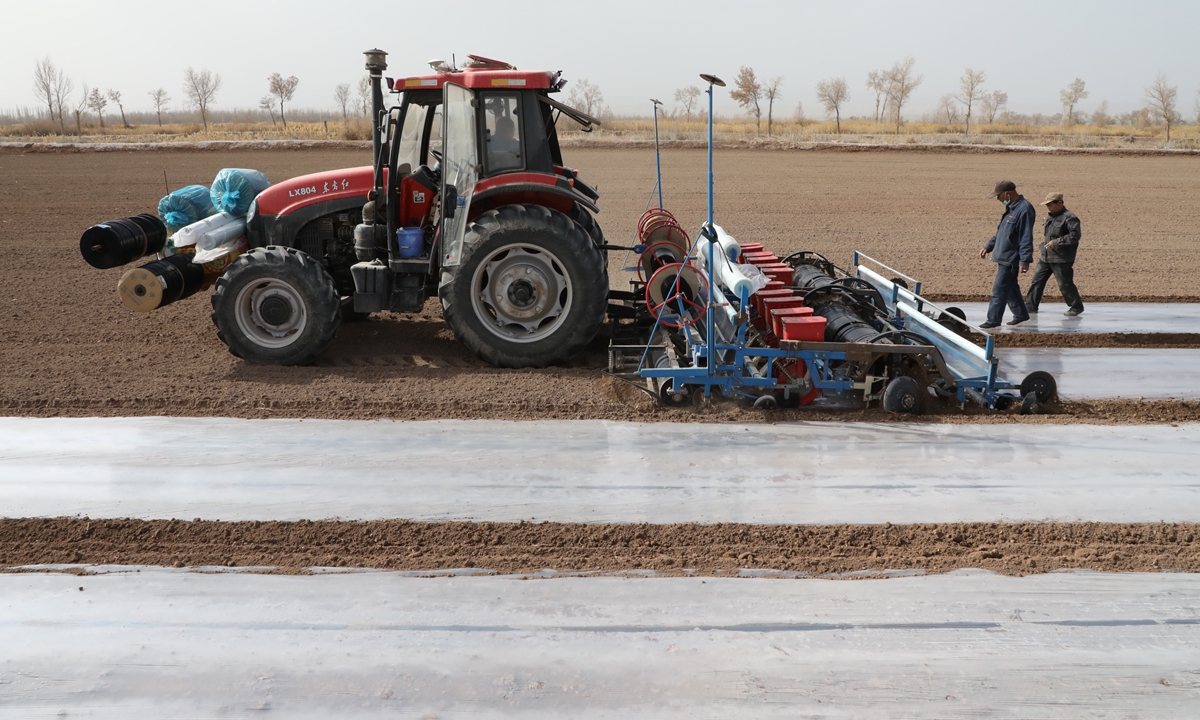 China' state broadcaster CCTV published in a Monday post the bird's-eye views taken by the Jilin-1, showing those unmanned vehicles preparing fields for the spring sowing and planting season in a 20,000-mu (1333.3 hectares) area in Bachu county, Kashi Prefecture of Xinjiang.

According to CCTV, such large tractors supported by the BDS are capable of carrying out raking, fertilizing, sowing, and laying drip irrigation belts, all in one go, and the plants they sow are in a straight line. Their high efficiency saves labor and money.

The latest survey that the China Cotton Association conducted shows that 43.176 million mu of fields in China are expected to be used to grow cotton in 2022, and the cotton area in Xinjiang region will expand 2 percent this year.

As China's largest cotton-producing area, Xinjiang had output of 5.129 million tons of cotton last year, accounting for 87 percent of domestic output, which was 5.731 million tons, according to the National Bureau of Statistics

More than 80 percent of the cotton crops in Xinjiang were harvested by machinery in 2021, a year-on-year rise of 5 percent, according to the region's Department of Agriculture and Rural Affairs.

The Global Times learned from the China Satellite Navigation Office on Tuesday that more than 100,000 farming vehicles in the country have been equipped with the BDS, and they have been contributing significantly in the spring sowing and planting season.

As of July 2020, more than 5,900 farming tractors and more than 5,000 forest-protecting drones had been equipped with BeiDou applications, according to media reports.

These data and images showed that Western accusations of so-called forced labor concerning Xinjiang cotton are nothing but groundless lies, observers said.

Xinjiang cotton is another tool for anti-China forces in the US to contain China's development, said Chinese Foreign Ministry spokesperson Wang Wenbin in January at a press conference where he debunked lies on Xinjiang and exposed the true color of the liars in the US.

Wang said that for some time, US politicians, in collusion with some anti-China organizations and individuals have been unscrupulously spreading and hyping the lies of "genocide" and "forced labor" in Xinjiang for ulterior political purposes. To achieve these purposes, they would camouflage themselves.