China announced the completion and commissioning of the Beidou Navigation Satellite System (BDS-3) on July 31, 2020, which means that users across the world can now access Beidou's open, free, high-quality navigation and positioning services. 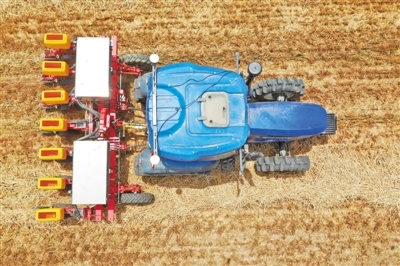 More than 70 percent of the smart phones connected to networks in China provide services offered by Beidou, and the positioning accuracy of shared bicycles has improved, from the former 1-10 meters to 10 centimeters-1 meter.

Every morning, Beijing resident Zhao uses a Hello Bike shared bicycle from downstairs in her residential community to ride 4 kilometers to work, which she has been doing for the last year. From the end of March this year, she felt that her shared bicycle experience has improved.

"In the past, sometimes when the APP on my smart phone showed that there was a bike outside the wall, I would find that the bike was actually behind the wall. As I was in a hurry to get to work, I had no choice but to give up on the ride," said Zhao, adding that these days, the positioning is much more accurate.

This change is a result of technological updates to the positioning services of bicycles. Currently, Beidou positioning devices have been installed in each Hello Bike bicycle's smart lock.

Services delivered by Beidou cover all aspects of life, from industrial to public applications.

Right now, Beidou navigation and positioning services have been adopted by fields such as e-commerce, mobile intelligent terminal manufacturing and intelligent wearable devices. More than 70 percent of smart phones connected to networks in China provide services offered by Beidou, showing that it is being widely used by ordinary people.

Huawei's mobile phones have supported the BDS-2 since 2013. But compared with GPS, Beidou mainly played an auxiliary role at that time. After 2017, mobile phones were able to receive more and more Beidou satellite signals, as the system became increasingly stable.

At present, the latest Honor 30pro mobile phones from Huawei provide support for the use of BDS-3 signals. Mobile phone engineers may not be familiar with the construction progress of the Beidou system, and only feel the changes through the change of signals.

"For mobile phone manufacturers, the algorithm is not biased towards the signals. Mobile phones attach great importance to the user experience, so manufacturers will definitely choose the signals that are best for users," an engineer from Huawei pointed out.

Beidou is also capable of perceiving subtle changes in the hidden dangers of geological disasters and issue early warnings.

"This year, the Beidou monitoring system gave an early warning in my hometown of Shimen county, Hunan province, and ensured the safety of people's lives and property," said Ran Chengqi, director of the China Satellite Navigation system Management Office, adding that "Beidou has played a good role in supporting science and technology in terms of deformation monitoring, early warning, and transfer of people."

Mountain torrents are the main cause of casualties in floods, and accurate prediction can buy time to relocate people, so "early warning" ability has become a top priority. At present, provinces such as Jiangsu, Guizhou, Guangxi and Sichuan have also established disaster monitoring systems based on Beidou, which can automatically monitor changes in hidden danger points 24 hours a day. Beidou enables preparations for disaster prevention and mitigation to be carried out in advance.

Beidou can also be applied in agriculture. After trucks are connected to Beidou data, information such as the actual location, operation route, cargo capacity, fuel consumption and mileage can be easily accessed.

"Thanks to the combination of Beidou navigation and the intelligent wheat farming system… we can automatically receive system instructions and obtain spatial location information, and then plan the operation route," Tian added.

Transportation is also a typical industry in which Beidou can be applied.

Liao Xining, general manager of Hunan Hongsheng Logistics Co., Ltd., is most concerned about how to prevent speeding and fatigue driving and improving the level of safety management in the process of urban distribution and dangerous goods transportation. Liao is deeply impressed by the changes that Beidou has brought to the freight industry.

"Last year, a rear-end collision occurred in the Hengyang section of the Beijing-Hong Kong-Macao Expressway, from which the driver escaped unharmed. Through the Beidou vehicle terminal, the traffic control department tracked down our company’s vehicle, which happened to be passing through the road section of the accident, and quickly located the vehicle that caused the accident through the camera installed on our truck," Liao recalled.

The Beidou vehicle terminal that Liao mentioned is a typical digital application in the field of traffic logistics.

"The speed limit of dangerous goods transport vehicles is 80 kilometers per hour. When the speed is about to reach this limit, the Beidou terminal will automatically issue a reminder. If you drive continuously for more than three and a half hours, the driver will also be reminded to have a rest," Liao said, noting that active management through the Beidou system has greatly reduced the incidence of speeding and fatigue driving.