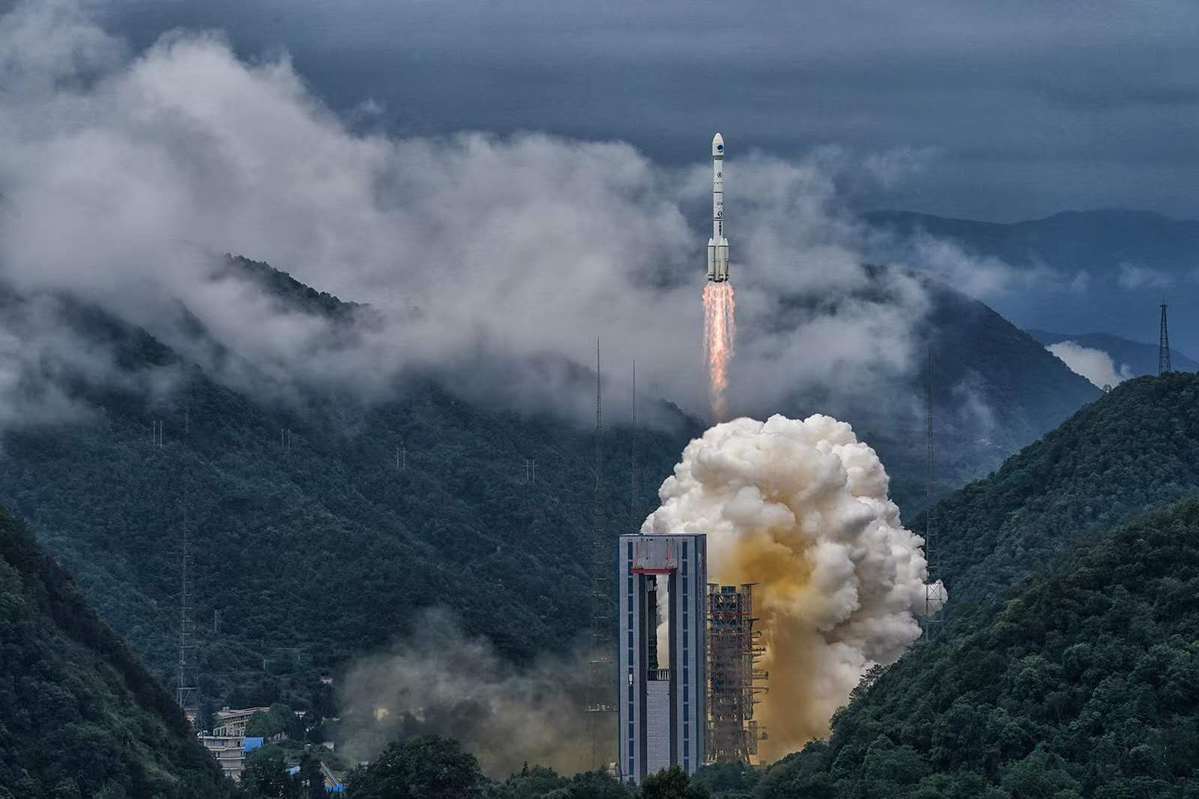 The final satellite of the Beidou Navigation Satellite System is launched and sent into orbit by a Long March 3B carrier rocket from Xichang Satellite Launch Center in Sichuan province on Tuesday. [Photo by Yin Gang/For China Daily]

The final satellite to complete the third-generation network of China's Beidou Navigation Satellite System has flown into its orbit and is in good condition, according to China Aerospace Science and Technology Corp.

The State-owned space conglomerate, which is the Beidou program's major contractor, said in a statement on Wednesday that the spacecraft, the 59th in the Beidou family and 30th in the third-generation series, reached a geostationary orbit about 36,000 kilometers above the Earth on Tuesday afternoon after an eight-day journey.

The satellite's equipment and payloads were in good condition and their signals had been received by ground control, the statement said.

The Xi'an Satellite Control Center in Shaanxi province said in a statement on Wednesday that its engineers would spend about one week examining the results of in-orbit tests on the satellite's devices and the inter-satellite links before the spacecraft starts formal operations to work with other Beidou satellites to give users around the globe access to high-accuracy navigation, positioning and timing services.

The satellite was lifted atop a Long March 3B carrier rocket on June 23 at the Xichang Satellite Launch Center in Sichuan province.

The deployment of the satellite marked the completion of the in-orbit construction of Beidou, the country's largest space-based system and one of four global navigation networks, along with the United States' GPS, Russia's GLONASS and the European Union's Galileo.

The satellite was designed and made by the China Academy of Space Technology, a subsidiary of China Aerospace Science and Technology Corp. Based on the DFH-3B satellite platform, it is designed to work in orbit for at least 12 years, according to the academy.

Since 2000, a total of 59 satellites, including the first four experimental ones, have been launched from Xichang on 44 Long March 3-series rockets, with some of them having retired.

Beidou began providing positioning, navigation, timing and messaging services to civilian users in China and other parts of the Asia-Pacific region in December 2012. At the end of 2018, Beidou started providing global services.

Now, there are 30 third-generation Beidou satellites in three types of orbit－24 in medium-Earth orbits, three in inclined geosynchronous satellite orbits and three in geostationary orbits.

There also are some second-generation Beidou satellites in operation offering regional services, according to the China Satellite Navigation Office.

Moreover, Beidou has a vast ground-based network that includes dozens of stations, more than 200 subsystems and over 30,000 sets of equipment.

China will continue improving the system's capabilities and services, the office said.