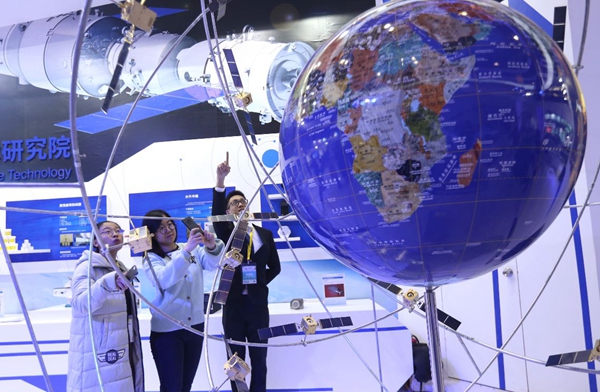 Visitors check out a model of Beidou Navigation Satellite System during an exhibition in Beijing. (Photo: China Daily)

China's Beidou Navigation Satellite System has started offering its services to a wide range of sectors as well as an expanding number of countries, as the homegrown system steps up its application and commercialization.

Beidou has had great applications in a string of areas including transportation, electrical power, fisheries, mining and agriculture, said Wang Yanyan, deputy general-secretary of the Global Navigation Satellite System and Location-Based Services Association of China.

Official data showed that the direct output of domestic satellite industries exceeded 300 billion yuan ($43 billion) by the end of 2019, with Beidou contributing 70 to 80 percent of the total.

"In addition to the navigation function that is well-known to the public, Beidou's applications in areas like pipe leakage detection has also made substantial progress," Wang said.

She noted that Beidou's technology in pipe network detection has already been applied in at least 600 cities, counties and towns across China.

Beidou has recently cooperated with Swiss industrial giant ABB in launching the world's first gas leakage detection system with an accuracy as fine as ppb or parts per billion, overturning the traditional accuracy of parts per million seen worldwide.

"With the new move, Beidou can not only position accurately the gas leakage points but is also able to analyze data, for example, to offer solutions," Wang said.

Zhang Yijin, head of analysis meter of ABB China, said that such an application has come into the forefront of global high-accuracy gas leakage detection, which has exceeded that of the global positioning system and Google.

Zhang said that such technology is prepared to go into the foreign markets soon with the Beidou system set to be complete by 2020.

Currently, there are 46 operational Beidou satellites and China plans to send two more satellites in geostationary orbit in the first half of 2020 to finish the deployment of all of Beidou's space-based assets.

China began to construct its Beidou navigation system, named after the Chinese term for the Big Dipper constellation, in the 1990s and started to serve the Asia-Pacific region since 2012. It is currently one of the four largest space-based navigation networks operating globally, along with the US GPS system, Russia's GLONASS and the European Union's Galileo.

Such progress also dovetails with China's determination to step up the application of Beidou systems in a wide range of sectors as well as various regions.

Statistics from the China Satellite Navigation Office showed that as of April, the Beidou system had been put into use in more than 6.2 million taxis, buses and trucks as well as at least 40,000 fishing ships across the country.

By the end of last month, Beidou's solutions were exported to more than 120 countries and regions, according to the China Satellite Navigation Office.

The system is now being applied in more international sectors including precision farming, digital construction and smart port construction, the office said.

"It is beneficial for the Association of Southeast Asian Nations, South Asia, Eastern Europe, West Asia and Africa," the office said.

With the 5G era, Beidou is also integrating with the new technologies including blockchain and artificial intelligence, according to the office.

In December, the Civil Aviation Administration of China released a roadmap for the application of Beidou, which pointed out that the civil aviation sector should gradually see full coverage from Beidou by the end of 2035.

"The application of Beidou in the segment will make up for the inadequacy of traditional navigation systems as the new application will greatly enhance safety and efficiency," said Liu Lianxi, an official at the CAAC.