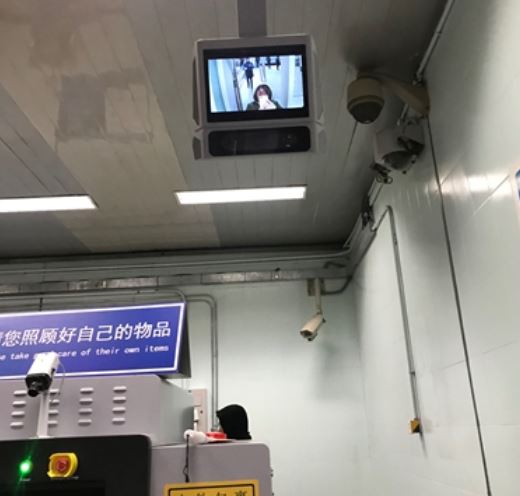 Facial recognition is on trial at a Beijing subway station to reduce pressure on security checks and save time for staff and commuters.

Commuters who are successfully verified and approved by a smart security check app will receive a green pass, allowing them to pass through a separate door with a facial recognition camera without the need to go through the security check.

The technology is still being tested at Fuchengmen Subway Station in Beijing and might soon enter wider use, a staff member at the subway station told the Global Times in an undercover interview on Sunday. It would reduce the security staff workload, the employee noted.

"Five or six passengers have asked me for help this morning when they were trying to sign up to the service on the app," said a man who was distributing the app brochure.

None of the 10 passengers randomly interviewed by the Global Times reporter said they had downloaded the app.

"I take the subway at Fuchengmen station every day, but I don't think I need this green pass as I am OK with the security check the way it is," one male commuter told the Global Times.

In registering for the service, a passenger must agree to allow the app to collect a trove of personal data from the user including his or her national identity card information, facial recognition information, payment, geographic location and personal credit score.

"Why do I have to offer this much personal information to get this little convenience?" was one typical comment on Sina Weibo.

Others noted the green pass would not only save time, but also help their mood under stressful commuting circumstances.

The social credit system is also involved in the security checks. As passengers enter the newly installed security door, a camera above scans and recognizes faces while connected to a nationwide online profile database.

Passengers' individual behavior history will be reviewed periodically and updated in the data system and those with infractions of subway laws and regulations will be prohibited from using the service, according to the app contract.

People with a poor social credit record will be banned from the app.

According to the Beijing Municipal Commission of Transportation's passenger rules released in May, improper behavior on the subway which will be recorded as bad social credit includes eating, taking up an extra seat, promoting or conducting sales transactions.

Chinese authorities have already introduced facial recognition to the country's railway stations, airports, shops and supermarkets, all with the aim of enhancing public security and bringing convenience to people's lives.