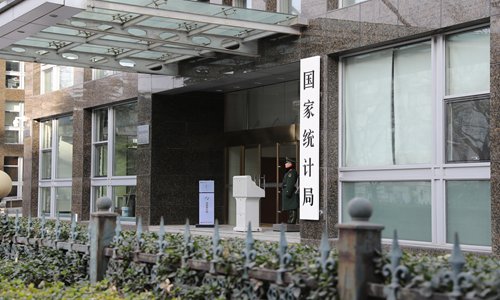 The headquarters of the National Bureau of Statistics in December 2018. (Photo: VCG)

Beijing is introducing state-of-the-art technologies and new means of governance to ensure the authenticity, accuracy and timeliness of statistical data, a key measure of national economic growth.

China may impose a credit rating system on statistics officials and company personnel who submit data to enhance the accuracy of these figures under relevant law, according to a draft proposal to the revision of the law. The document was posted on the website of the National Bureau of Statistics (NBS) on Tuesday.

The new law calls for the harnessing of the internet, big data, cloud computing, the Internet of Things and artificial intelligence to improve statistical work.

Analysts said the new law will be a further effort to prevent and penalize statistical fraud and data falsification by enshrining some current practices into law. The draft proposal is open for public comment until November 9.

Officials have been sporadically punished for falsifying statistical data and the NBS has repeatedly reiterated the overall accuracy of published data.

Its release comes at a moment when accurate figures are of pivotal importance against the backdrop of the ongoing China-US trade war, which has brought downward pressure on the Chinese economy. The accuracy of NBS data has been repeatedly challenged by foreign media outlets.

Since 2014, China has been attaching growing importance to the veracity of its data after the central government openly criticized Northeast China's Liaoning Province for falsifying data.

In 2018, China introduced an inspection regulation mechanism across the country with measures such as holding local leaders accountable for the accuracy of data and employing the social credit and joint punishment system. The NBS has stepped up efforts to disclose statistical irregularities since the end of 2018, observers said.

"As these practices are already in place, writing them down into law is a natural step," Ye Qing, a professor with Wuhan-based Zhongnan University of Economics and Law, told the Global Times. "This will give these measures a higher degree of legal authority."

In particular, the new law requires administrations above the county level to set up independent statistics departments. Those in the leadership responsible for statistical work will be held accountable if data falsification is found.

Perpetrators will face legal penalties and social penalties such as being barred from bullet-train trips or holding credit cards, according to observers.

Li Chang'an, a professor at the Department of Public Economics at the University of International Business and Economics, told the Global Times on Tuesday that there will be a higher degree of deterrence by linking the faithfulness of data to the personal credit records of statisticians and company employees submitting data.

"Enshrining these methods into legal language will greatly enhance deterrence against those who attempt to falsify data," Li said, noting that the tougher penalties in the new law are in line with society's growing attention to economic data.

China's nascent social credit system is seen as an effective way to punish those who have low credit. According to the National Development and Reform Commission, the system prevented 2.5 million "discredited entities" from purchasing plane tickets and 90,000 people from buying high-speed train tickets in July.

"Online data submission is efficient compared with the traditional methods of physical monitoring and recording, and it helps ensure the accuracy of key data such as the consumer price index, which measures inflation and is closely followed," Ye said.

It is important to continue to reform official appraisal mechanisms as well, to eradicate the tendency of local officials to falsify data in an aim to raise their performance to impress higher-level authorities, Li said.